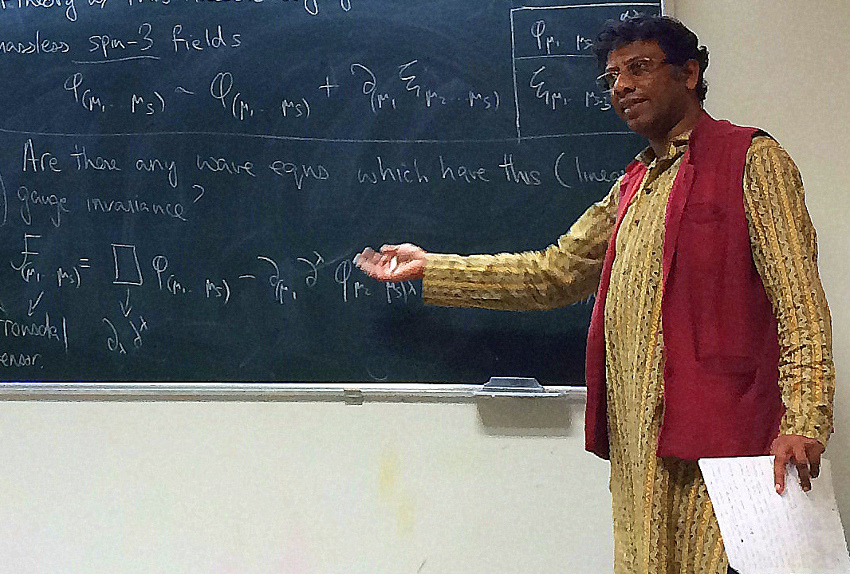 Much of theoretical physics resides on the difficult task of connecting one theory with another, so that all of physics may someday be combined into one overarching set of laws. Rajesh Gopakumar is one such theoretical physicist, whose work is helping to bring sense to the baffling laws of quantum physics.

Gopakumar has worked in quantum field theory and string theory, particularly where the two fields intersect. Quantum field theory is about understanding how nature works at sizes smaller than atoms, while string theory describes one way those laws of the very small could connect to the laws of the very large, such as gravity, and explaining such mysteries as the power of black holes and the accelerating expansion of the universe.

The primary aim of Gopakumar’s research has been to better understand the relationship called the gauge-string duality, which connects string theory to topics such as quark soups. Quark soups have a temperature or density so great that quarks flow freely instead of collecting into larger particles such as neutrons and protons.

He’s continually discovered new examples of the gauge-string duality. For example, his work on a simplified version of string theory led to what’s now known as the ‘Gopakumar-Vafa duality’, which in turn gave rise to a new category of algebraic invariants – mathematical quantities that remain the same even as mathematicians make continuous changes.

Gopakumar did his doctoral work at Princeton University, USA. He received his PhD in 1997 under the supervision of 2004 Physics Nobel Laureate David Gross (TWAS Fellow 2007). After a few years as a research associate at Harvard University, USA, Gopakumar joined Harish-Chandra Research Institute in his home country in 2001. He also held a visiting membership at the Institute for Advanced Study, Princeton, from 2001 to 2004.

Gopakumar received the B.M. Birla Science Prize in 2004, the ICTP Prize in 2006, and the Shanti Swarup Bhatnagar Prize in the physical sciences for 2009 – the highest scientific award in India. He is also a founding member of the Global Young Academy, which grew out of an initiative by TWAS.