The International Year of Crystallography in 2014 will bring global attention to a field that is little-known, but which can be a major force for advancing knowledge and economic growth in the developing world. An article in the latest TWAS Newsletter explores the importance of the field. 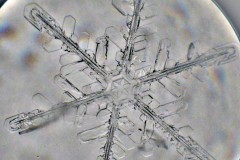 Crystallography has been an immensely powerful influence in science over the past century, yet it is rarely a government priority and is scarcely known by the public. UNESCO and the International Union of Crystallography (IUCr) are planning to change that next year with an ambitious, worldwide schedule of activities.

The article in the TWAS Newsletter surveys some of the activities that were discussed when an IUCr delegation visited TWAS recently. Many of the events will be focused on the developing world, IUCr President G.R. Desiraju (TWAS Fellow 2002) said in a recent email interview.

When X-rays are fired at crystalline materials, researchers can study the diffraction patterns to see the molecular and atomic structure of matter. In contemporary applications, crystallography uses many techniques allowing structural studies at an increasingly small scale, sometimes using X-rays generated by powerful synchrotron sources. Crystallography is essential in a variety of fields, including materials science; analysis of crystalline structures allows scientists and engineers to create new materials that have considerable value in everyday life.

Crystallography "is easy to do, relatively inexpensive, extremely accurate, and generally independent of sophisticated infrastructure", Desiraju said. "Thus, in the developing world, it is the single most important technique that has led to a rapid increase in the number of quality publications in respected international journals. It provides training that fine-tunes desirable qualities such as precision and accuracy in scientific research, and encourages a quantitative bent of mind."

TWAS Executive Director Romain Murenzi welcomed the focus on this field. "Crystallography should be a prime field for focus and investment by policymakers and educators in developing nations", he said after the meeting with IUCr officials. "Nations that develop skill in this field create their own power – the power to address challenges in food production, clean water and health. That makes the International Year of Crystallography very important, and we look forward to working with Prof. Desiraju and his colleagues."

The IUCr already funds the successful 'Crystallography in Africa' education and training programme, and ambitious outreach is also planned for Latin America and Asia.

An opening ceremony for the International Year of Crystallography is scheduled for 20-21 January 2014 at the UNESCO headquarters in Paris. Other events will be held throughout the year.

Also in the latest issue of the TWAS Newsletter: