TWAS editor Daniel Schaffer is in Paris at 'Berlin7', an international open access conference held at the Université Panthéon-Sorbonnes, where he spoke to Zhang Xiaolin, executive director of the Chinese Academy of Sciences' National Science Library. 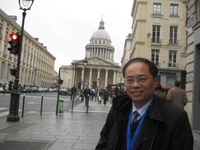 Paris, France. With more than 30,000 researchers and 45,000 graduate students (half of whom are PhD students), the Chinese Academy of Sciences (CAS) is one of the world's foremost scientific institutions.

Each year, academy researchers publish more than 80,000 articles. That level of output requires a great deal of research. Such research, in turn, requires a broad and sophisticated library system attuned to today's information and communications technologies.

"The CAS library has a staff of nearly 500," says Zhang Xiaolin, the executive director of the academy's National Science Library (NSLC). "They are not only highly skilled in library science but conversant in specialized subject areas such as nanotechnology and biochemistry. The staff must also keep pace with the rapidly changing world of information technology."

One area of growing concern to Zhang and his staff is open access, the focus of the Berlin7 conference held at the Université Panthéon-Sorbonne in Paris from 2 to 4 December 2009.

Zhang supports open access repositories, which are designed to encourage researchers to place their publications in an electronic archive located in the institution in which they work.

Since April Zhang has led an effort urging CAS's 100 research institutes to sign on to a plan to establish their own open access repositories. To date, more than half have done so, and he expects most, if not all, of the others to do so in the near future.

"In principle, Chinese researchers agree with the concept of open access repositories." However, he says, "they want to understand the full implications of these initiatives." Researchers are particularly concerned that free access to their publications will compromise their relationship with prominent publishers and handicap their ability to publish in the world's most prestigious journals.

When speaking to researchers, Zhang makes three points to counter their concerns. First, he contends that repositories provide a way for each institute "to organize its knowledge assets." Presently, he notes, most CAS institutes cannot make a full accounting of their staff's publications, which are published individually in journals across the world. Second, he says repositories would enable institutes "to more effectively showcase the work of their researchers." And, third, Zhang says that institutes "have an ethical responsibility to make the information produced by their researchers available to the public, which is paying for the research." Creating free access repositories, he maintains, "is a way of increasing accountability and transparency."

China, Zhang notes, hopes to achieve international status for its most prominent journals, most notablyScience in China and Science Bulletin. To advance this goal, it has forged a collaborative agreement withSpringerLink that is scheduled to become fully operational in January 2010.

While Zhang welcomes the editorial and marketing skills that Springer will bring to this relationship, he worries that the partnership will limit access to the journals in China. "Under the arrangement, Science in China and Science Bulletin could be integrated into a costly data base package that may prohibit readers from gaining access to either journal unless they purchase the entire package."

Ideally, he says, "we would like to expand both access to Chinese scientific literature and the literature's impact in international science." When those two worthy principles collide, "we should seek ways to enable both goals to move forward through effective strategies that create 'win-win' situations." That is why Zhang is currently calling for the creation of a Scholarly Communications Office that would negotiate directly with publishers to help ensure that initiatives designed to increase the impact of Chinese science in international publishing do not limit access to that information in China.

"Open access is a powerful trend in global scientific publishing that will undoubtedly become even more powerful in the years ahead," Zhang notes. He adds that the National Science Library, which will host the Berlin8 Open Access Conference scheduled to take place in Beijing in October 2010, "hopes to have an important role in developing an effective open access strategy that serves both China's scientific community and larger society."