As the Philippines struggles to overcome the devastation of Typhoon Haiyan, scientists and policymakers are realizing that improved education and communication will be crucial to limit losses in future disasters, says TWAS Fellow Lourdes Cruz, president of the nation’s National Research Council. 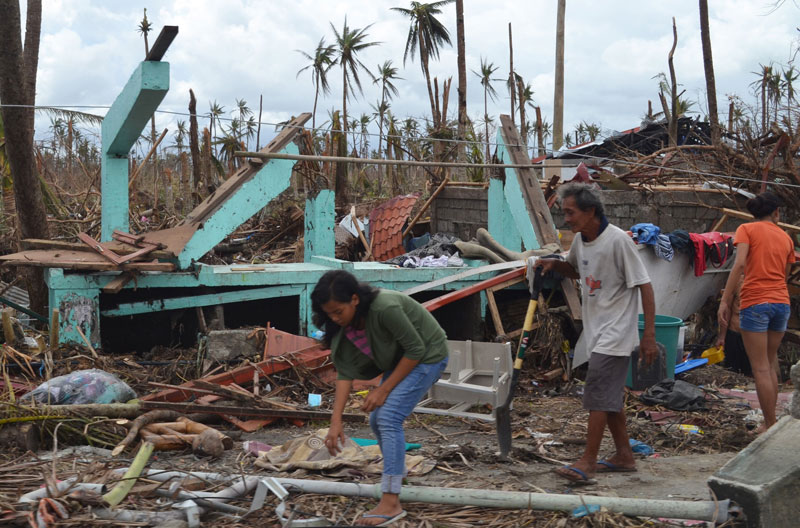 At a high-level meeting called last week to analyse the disaster, scientists concluded that insufficient government communication and a lack of basic understanding among people who live near Tacloban City on the nation's East Coast may have significantly contributed to the casualties there, Cruz said in an interview after the meeting.

For example, as Haiyan approached, many people didn't evacuate because they didn't understand the meaning of the term "storm surge", suggests a recent report in the Philippine Daily Inquirer. Some people misinterpreted the incoming seawater level rise as an ordinary tide, and others expected nothing worse than Typhoon Agnes in 1984, which was dwarfed by Haiyan. Some local authorities even misused the term, using it to describe flooding from smaller storms.

Driven by winds that peaked at 315 kilometres per hour, the storm surge of nearly four meters pushed far inland, destroying almost everything in its path. "Since people never experienced anything like it," Cruz explained, "I don't think they realized the strength of it."

The 8 November storm killed more than 6,000 people, injured more than 27,000 and left millions homeless. Researchers and computer models suggest a repeat of such disasters grows more likely at locations worldwide as climate change amplifies the frequency and intensity of large storms.

At the 10 December meeting, scientists and policymakers explored a multidisciplinary range of issues that can have a bearing on future storms: environmental changes, engineering solutions, the importance of computer modelling and the need for social scientists to study human behaviour before, during and after natural disasters.

The meeting was called by Amelia Guevara, the Philippine undersecretary for research and development and attended by Mario Montejo, secretary of the nation's Department of Science and Technology.

Cruz is a biochemist and one of six Filipino TWAS fellows. She is the Philippine representative to the International Council of Science (ICSU) Regional Committee for Asia and the Pacific. In 2008, she was elected a National Scientist by the National Academy of Science and Technology of the Philippines. The title, the highest honour the government gives to its scientists, was conferred to her by then-president Gloria Macapagal-Arroyo.

Ineffective communication appeared to play a critical role before Haiyan, and the meeting last week suggested that the problem may have had several dimensions, Cruz said in the interview.

When some people in Manila contacted their relatives in Leyte to warn them, she explained, many responded that the skies were sunny. "The typhoon was moving quite fast, much faster than other typhoons, and before they knew it, it was getting dark and the water was coming."

Another clear lesson is that education is essential. The country needs to build understanding not only through the news media, she said, but by providing education about atmospheric science in high school and even elementary school.

Universities in the Philippines already have civic welfare service programmes that help college students bring knowledge back to their home districts, and those programmes could be expanded. Perhaps, Cruz said, if knowledge of hurricanes and the way scientists describe them were more widespread, more people would have understood the urgent need to evacuate.

"Since we're in this zone where we are hit directly by typhoons six to nine times a year, everyone should know about the science of this," she said.

Communications between different fields, such as computer modellers and engineers, also is important, she explained.

One idea that drew extensive interest at the meeting calls for the use of mangroves and beach forest trees in buffer zones that absorb force from the storm surges between the shoreline and where people live. Computer modelling experts worked with ecologists to discuss how such reengineering projects could work in combination with stone walls that help break the waves.

"It should be a combination of both soft and hard engineering," Cruz said.

Social scientists are needed to analyse how to anticipate peoples' actions during a storm and how best to help their citizens after they've suffered painful losses from the storm. "There's a lot of trauma," Cruz said, "and the analysis of people's actions that are now going on are important."

South and Southeast Asia are one of the hazard-prone regions that is the focus of CATALYST, an international initiative to strengthen science in regions at a high risk from natural disasters. As a CATALYST partner, TWAS manages the initiative's communication strategy.