The opening of the new Ecuadorean Academy of Sciences will help the South American nation to build research strength and closer ties with TWAS and the global scientific community, TWAS President Bai Chunli said during a recent visit. 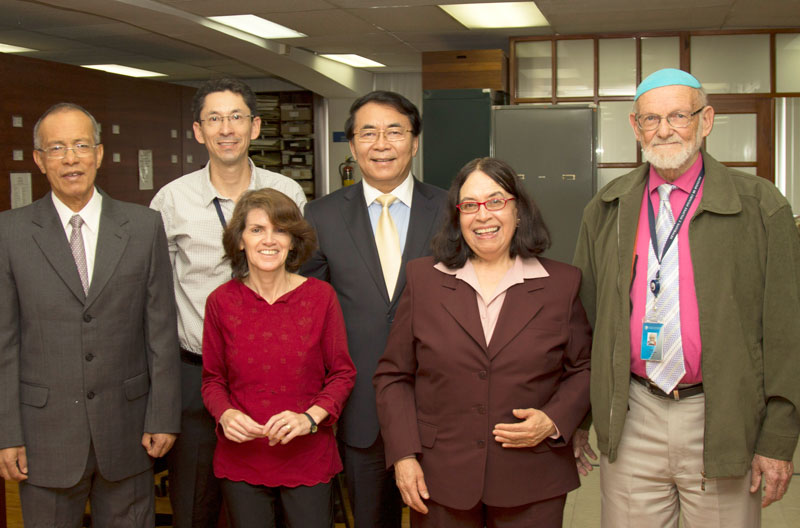 During the visit, Bai met with a trio of TWAS representatives and with officers of the new Academy. He encouraged them to further develop Ecuador's strength by taking advantage of new PhD fellowships and other opportunities created this year in agreements between TWAS and the Chinese Academy of Sciences (CAS).

The creation of the Ecuadorean Academy of Sciences – Academia de Ciencias del Ecuador (ACE) – "is an important milestone achievement for the country as it advocates the importance of science and will gather some of the best talents under the umbrella," Bai said in an email interview after the trip. "It has the good potential to be a scientific think-tank for the country on major S&T and development issues."

The Ecuadorean representatives of TWAS – the nation's one elected Fellow, and two young affiliates – welcomed the visit, as did the president of the new academy.

ACE Vice President Eugenia del Pino Veintimilla, a TWAS Fellow since 1989, characterized the conversation with Bai and the CAS delegation as "friendly, open and very kind".

Carlos A. Soria, president of the Ecuadorean Academy, welcomed Bai's encouragement to take part in Fellowships and other CAS-TWAS programmes.

"If these opportunities could be worked out," Soria said, "they will prove to be mutually beneficial since we could share scientific problems and solutions that could be at hand, learning from each other, making the world smaller."

Bai also serves as CAS president, and his 28 November visit with TWAS and ACE representatives came during an official Chinese Academy visit to Ecuador's Secretariat of Higher Education, Science, Technology and Innovation (SENESCYT). The work on behalf of TWAS fits closely with Bai's goal of increasing TWAS membership in, and engagement with, developing countries where the Academy has few members, as in Ecuador, or none, as in neighbouring Bolivia.

The meetings took place at the School of Biological Sciences of the Pontifical Catholic University of Ecuador (Pontificia Universidad Católica del Ecuador), where del Pino is a retired professor of biology and Soria is a professor of biology. Although the university's rector, Father Manuel Corrales Pascual, was not available, the Chinese delegation also met with Carlos Acurio Velasco, director of academic affairs, and Hugo Navarrete Zambrano, dean of the faculty of exact and natural sciences. Bai also toured two laboratories at the university: the laboratory of herpetology, where the balsa de los sapos project keeps living frogs for study and reproduction, and the herbarium. Biology professor Santiago Ron, a TWAS Young Affiliate and ACE secretary, guided the tour of the frog lab. Another Young Affiliate, biology professor Fabián Saenz, joined the group at the herbarium. Two other ACE board members, herbarium curator Katya Romoleroux, and ecology professor and ACE treasurer Tjitte deVries, also joined the group. [Professor Jaime Costales Cordero, TWAS's third Young Affiliate in Ecuador and a member of the ACE Board of Directors, was in France and could not be present.]

"I found the biodiversity labs to be well-equipped and well-staffed, with clear research goals and objectives," Bai reported. "The scientists there are very much dedicated to science and biodiversity conservation."

Such labs are critically important for Ecuador, Bai added, because the herbarium alone hosts samples of over 26,000 species of plants, an indication of the country's rich biodiversity, and the total number of plant specimens reaches about 200,000. "Ecuador faces a tough challenge in both research and conservation," he said. "For example, one-third of the species are endangered and there is a lack of crop genetics inventory work. These natural resources are not only good for the future well-being of Ecuador, but that of the rest of the world."

Young Ecuadorean scientists, like many of their colleagues in Latin America, typically look to Europe and the United States for advanced education and training opportunities. But Bai encouraged his hosts to spread the word about two new CAS-TWAS programmes: "The government of Ecuador has strong links with China in regard to cooperation in trade, and other major projects," said del Pino. "For this reason, I think that more and more links with China in the academic fields will be established to the further benefits of both countries."

Bai expressed "sincere congratulations and best wishes" to the new Ecuadorean Academy of Sciences. The involvement of del Pino, Ron and Costales, he said, "demonstrates that TWAS Fellows and Young Affiliates can play very important roles in advancing a nation's scientific capacity-building."

Del Pino added that a constructive relationship with TWAS is sure to help the new Ecuadorean Academy.

"The support of TWAS will give visibility and strengthen ACE", she said in an email interview. "We can cooperate with SENESCYT. For example, we can help in providing recognition to the scientific work done by investigators and students in Ecuador. Our role is immense and TWAS can help us greatly."

[TWAS Fellow Eugenia del Pino Veintimilla was featured recently in a BBC report about 10 women who are leading scientists in Latin America.]