Argentinian neuroscientist Francisco Barrantes has spent a career bringing the finest details of the nervous system into sharp focus. Advanced technology provides new insights, he says, but many mysteries remain 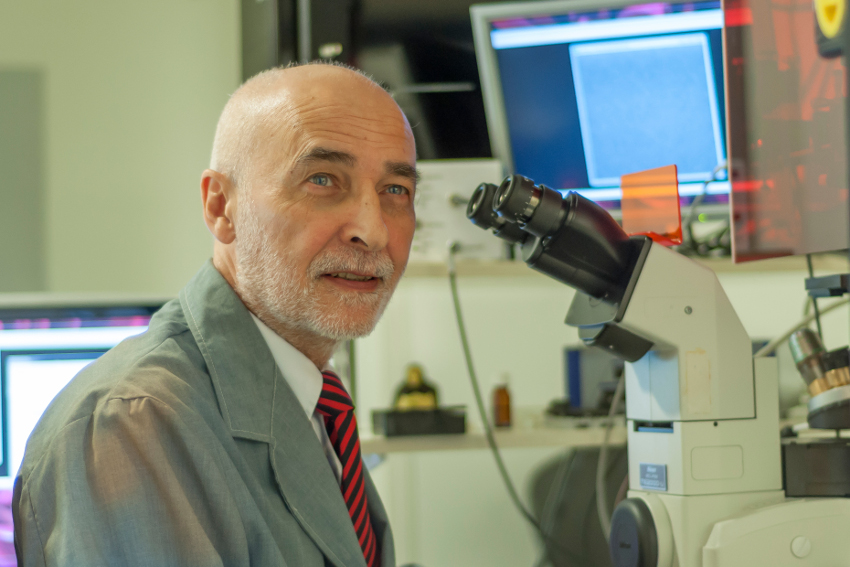 After decades of research and investment amounting to billions of dollars, some of the basic workings of the human brain still remain a mystery to science. Brain diseases and disorders are especially frustrating, because they cause profound pain and loss in communities all over the world.

What causes Alzheimer’s disease? What is the chemistry of addiction? Why do schizophrenics often have auditory hallucinations, and how can the symptoms be eliminated, or at least controlled?

TWAS Fellow Francisco J. Barrantes, an Argentinian neuroscientist, has contemplated these questions through a research career spanning four decades and four continents. The mysteries of many disorders remain locked tight, he says, but as imaging technology improves, science is acquiring insights that may someday yield important advances.

The challenge is fundamental. “The brain is by far the most complex machinery known in the universe, far surpassing – by many orders of magnitude – the most advanced supercomputers”, Barrantes says. “A small galaxy contains in the order of 100 billion stars. Our cerebral cortex... contains approximately the same number of neurons as the number of stars in a small galaxy.”

But some 5,000 synapses make contact with every neuron, he said, and the varied chemical components of each neuron add a further dimension of complexity.

Barrantes heads the Laboratory of Molecular Neurobiology in the Biomedical Research Institute at the Pontifical Catholic University of Argentina. He was elected a TWAS Fellow in 1991, and today serves as the Academy’s vice president for Latin America; he was named to deliver one of three TWAS Medal Lectures at the Academy’s 2013 General Meeting in Buenos Aires.

While brain diseases challenge researchers in the world’s most advanced laboratories, he said, it is essential that scientists in the developing world join in the pursuit of knowledge that can lead perhaps cures.

“I think developing nations need to develop their own skills in all disciplines of human knowledge”, Barrantes said in the interview. “Neuroscience is no exception. I feel the ability to pursue research in neurosciences sometimes can be accomplished with simple tools, which even the lesser-developed countries can tackle. I think this is a very important concept that has to be told to our youngsters in developing nations: try to tackle any kind of questions, and don’t be afraid of facing apparently insurmountable tasks.”

An early start in neuroscience

Barrantes’ mother was an obstetrician, and his father was a gynaecologist, and he too initially set a course for a career in medicine. But by his second year of medical school in Buenos Aires, he was already a teaching assistant in neurobiology under Eduardo de Robertis, a pioneer of electron microscopy and neuroscience. De Robertis had been one of a small international team that revealed the structure of the synapse in 1954, in a pioneering paper in the Journal of Cell Biology.

“I knew that my destiny was in science – I was going to be a basic scientist, not a practicing MD”, Barrantes says now. “Neuroscience came very early in my life, and I loved the idea of doing research.”

That was the start of a rich, high-impact research career. After earning his PhD in 1973 at the University of Buenos Aires, he spent nine years at the Max Planck Institute for Biophysical Chemistry in Germany, serving for nearly five years as the joint head of the Membrane Biophysics Group. He has had research posts and visiting professorships in Europe, the United States, India and Israel, but has been based back in Argentina since 1983. He formerly served as director of the Bahia Blanca Science and Technology Centre of the Argentinian national research council Consejo Nacional de Investigaciones Científicas y Técnicas (CONICET) and as director of the Institute of Biochemistry there. He remains a top-ranked researcher at CONICET, and holds the UNESCO Chair of Biophysics and Molecular Neurobiology.

Deeper and deeper into the brain 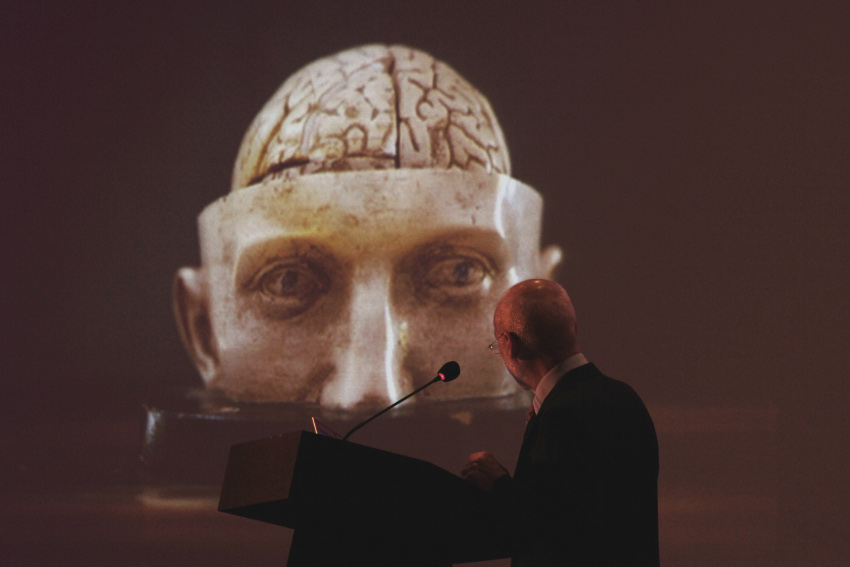 During his 40-minute TWAS Medal lecture at the General Meeting, Barrantes offered an eloquent tour of the brain, with a mix of knowledge and passion that could engage both scientists and a general audience.

Starting from the cerebral cortex cellular organization, he focused in on smaller and smaller units of the brain’s complex system. Glial cells, which support and protect neurons. Neurons, the “extremely exquisite” and excitable cells that transmit information through electrical and chemical signals. Dendrites, the arborisations of neurons, covered in thousands of nanoscale protrusions called spines, where excitable synaptic contacts occur. The synapse is a main element of information flow, traffic and storage in the brain, Barrantes explained, and in those spines there are thousands of different proteins that serve as signalling enzymes, receptors and fulfill other functions. Synapses conduct chemical or electrical signals between neurons and other cells.

“The operation of the brain can be envisaged as a multi-stratified time-dependent system, which involves genes, molecules, cell, networks, and the whole brain”, he said. “The brain’s performance is exceptional. Light and sound are sent chemically to regions of brain, where they are processed by complex mechanisms. Sometimes – but not always – they become conscious.”

And when that happens, functional magnetic resonance imaging shows the result: “The whole brain lights up.”

Why is the brain so complex?

“Probably for two reasons”, Barrantes said in the interview after his address. “One is because of the sheer numbers involved – the number of connections that we have. The static view would put complexity at the level of the 1015 different synapses in the brain, especially human brains. And the second thing is the dynamics – the fact that the connections as we speak are modifying... When we sleep, we reshape, we destroy, we redo, and our dreams convey new connections. We reconnect and disconnect, and as we age we destroy at an accelerated rate. This makes establishing the connectivity not only a daunting challenge, but it seems an impossible task.”

Reading the brain in action

That’s where technology becomes so important. With the best conventional microscopes, researchers can see that the dendrites appear like tiny buttons on the top of the neuron. But researchers around the world are working to surpass existing limits and achieve ‘super-resolution’ in brain imaging.

For example, Barrantes explained, electron microscopy, also called nanoscopy, is allowing researchers to see the process of synapses with much more detail – and to understand them better. His group in Buenos Aires is using super-resolution microscopy to look at brain processes at the molecular level, for example by assessing clusters of synaptic receptor molecules in living neurons.

Researchers at the Max Planck Institute in Germany have successfully pushed super-resolution to a new power, so that they can look at the behaviour of neurons in a whole animal. Using stimulated emission depletion fluorescence nanoscopy, they have been able to see, with amazing clarity, “spines along the dendrites dancing in a live mouse”, Barrantes said. “This is a really major accomplishment.”

Easing the toll of brain disease

Disease strikes various parts of the brain. Some of the disease is organic, and some is genetic. To varying degrees, brain disease can be influenced by environmental factors. Taken together, however, the toll is enormous. According to Barrantes, the burden of these diseases is now “far greater than all the communicable diseases put together.”

The more powerful new methodologies in the basic neurosciences imaging technology could play a strong role in research on many of these pathologies.

Alzheimer’s disease and other pathologies may result from ‘cross-talk’ malfunctions between neurons. Other diseases directly target specific types of neurons; amyotrophic lateral sclerosis (ALS), the most common of five motor neuron diseases, is devastating and finally deadly to those afflicted.

Autism spectrum disorders and addiction also appear to result from synapse disorders. Schizophrenia may be a disease resulting from an interplay of genetics and environment, with malfunctions in multiple neural circuits and networks.

That gives rise to a central, intriguing hypothesis in Barrantes’ recent work. A key problem in neuroscience is the accurate storage of information in densely packed synapses; cross-talk and breakdowns in storage functions may be at the root of a number of brain pathologies having in common alterations in cognition and memory.

Barrantes is reluctant to predict that neuroscience will solve these complex diseases in the near future. Perhaps there will be significant advances in treatment to ease some of the symptoms. But the effort will go on – and, he says, young scientists in the developing world must invest their energy in this important work.

“The inherent complexity may preclude some young people from getting into the neurosciences”, he concludes. “But once we convince the young people, people at the age of secondary school... neuroscience in particular offers the ability to understand the way we function at higher levels, and to understand the world with a different perspective. I think that is something that can have a very positive impact.”