BioVision: Learning the ways of innovation

Some 100 young scientists from around the world, mostly PhD students and postdocs, convened in Lyon, France, to participate in the 2013 edition of BioVision, the global life sciences forum, held 24-26 March 2013. 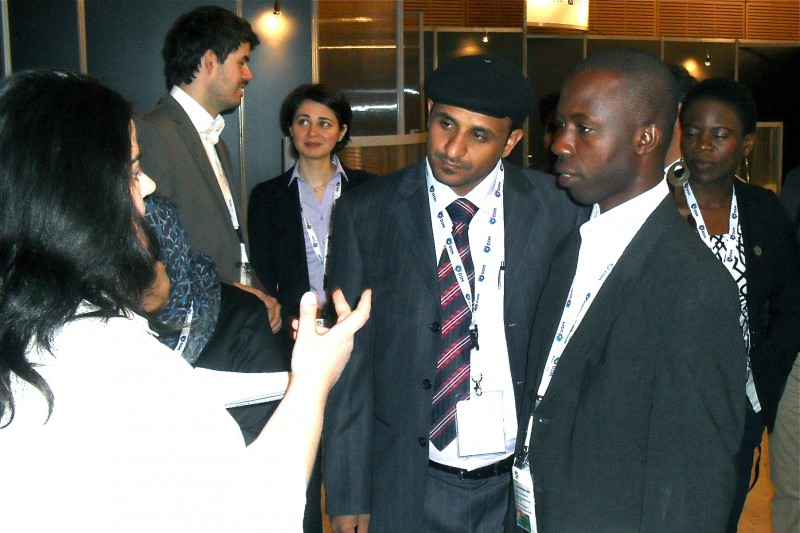 Fifty of these young scientists have come from developing countries and have been provided with travel support by TWAS. The Academy's five regional offices each selected ten students. As well as attending the main BioVision sessions, the group of young scientists has their own agenda of parallel activities: BioVision Next.

Among these activities is the opportunity to meet with leading scientists, including Nobel laureates and heads of science-based companies such as the Lyon-based Sanofi, in casual interview sessions. In addition, the Next Fellows have a series of tasks assigned by the BioVision organizers.

Among these, they are responsible for producing journalistic reports on all the sessions that will be published, with their bylines, on the BioVision website. The aim is not only to increase the visibility of the forum and reach a wider, non-technical audience, but also to provide an opportunity for the Next Fellows to hone their skills in writing for an audience other than their scientific peers.

The results of the Next Fellows efforts will be available on the BioVision website beginning 3 April.

TWAS Young Affiliate Christian Cumagun, from the Philippines, was one of those selected to present his project proposal as part of the BioVision Catalyzer sessions.

The aim of ‘Catalyzer’ is to provide visibility and feedback to promising research projects. For his part, Cumagun presented in the session focusing on biodiversity, climate change and agronomy.

His project is aimed at identifying an endophytic fungus from the rapidly dwindling jungles of the Philippines that has potential to control two devastating fungal diseases of banana.

Currently Sigatoka disease of banana, caused by the Mycosphaerella fungus, is controlled in the Philippines’ vast banana plantations by aerial spraying of fungicides. The problem is that such interventions are contaminating the environment – and affecting the health of the 300,000 or more people living within 3-4 kilometers of the plantations whose water supply and air they breathe is affected by drifting pesticides.

“Indeed,” said Cumagun, “the Philippines Ministry of Health has identified such fungicide sprays as a health hazard and would like to see the process phased out.”

With the collaboration of Gary Strobel from the University of Montana in the United States, Cumagun aims to focus on Muscodor, an endophytic fungus that has been identified in other countries and has some interesting properties. It can, for instance, directly kill pathogenic fungi such as those causing the diseases of banana. But it also toxic to the funghi through a volatile chemical that it produces; that chemical is harmless to humans and other wildlife.

“My aim in attending BioVision is to seek out potential partners and funders who can help me move this idea to the laboratory and eventually to the field,” confirms Cumagun. “Given the nature of the people attending, I am hopeful - even if I don’t win the Catalyzer award – that here I can make the contacts necessary.”

Cumagun’s presentation was in ‘Focus 3: Biodiversity, Climate Change and Agronomy’.

The results were presented during the closing session of the BioVision meeting on the afternoon of Tuesday, 26 March 2013. The winner of the Focus 3 session was Ocky Radjasa, Diponegoro University, Indonesia, for his proposal to search for compounds in microbial symbionts living in Indonesia's rich marine biodiversity as potential therapeutic agents for multi-drug resistant tuberculosis (press release in Indonesian by Diponegoro University).