Call for Greater Investment and Collaboration in Science in Africa

"Africa's universities must be reformed and strengthened, and each African country must have at least one world-class university." This was the key message conveyed by Mohamed H.A. Hassan, executive director of TWAS, at the Conference of Regional and Interregional Cooperation to Strengthen Basic Sciences in Developing Countries, held in Addis Ababa, Ethiopia, 1-4 September 2009. 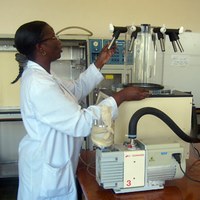 In his plenary lecture, Hassan called for increasing the level of support for young scientists in Africa and promoting strategies to engage Africa's diaspora in scientific activities across the continent through such activities as "exchange programmes, visiting professorship schemes and joint research projects".

Hassan lamented the absence of science foundations in Africa – only South Africa has a national foundation that actively provides grants and general funding for science. As a result, he noted, organizations such the International Foundation for Science (IFS), the Abdus Salam International Centre for Theoretical Physics (ICTP), the University of Uppsala's International Science Programme (ISP) and the Regional Initiative in Science and Technology (RISE) must continue to play a critical role in compensating for a lack of funding for basic scientific research in many African countries.

Hassan stated that several African countries were taking important steps to improve their scientific capacity. For example, he noted that "Rwanda is now spending 2.5 percent of its gross domestic product on research and development" and that "South Africa is spending about 1 percent." Tanzania, he said, has recently announced that it would raise its R&D expenditures to 1 percent of GDP by 2015.

But Hassan was quick to add that, by virtually any measure, Africa continues to lag far behind other continent's in scientific capabilities. "With nearly 15 percent of the world's population", Hassan observed, "African scientists produce less than 1.5 percent of the world's peer-reviewed scientific publications". He went on to say that six of the top ten countries with the highest percentage of emigrated citizens are from sub-Saharan Africa. "Chicago", he observed, "has more doctors of Ethiopian origins than Ethiopia itself".

The key to Africa's future success, Hassan concluded, lies with "forging sufficient levels of regional and international cooperation to help raise the quality of education and research in Africa". Steps, he said, must be taken "to integrate the continent's scientists into the global scientific community and to create sufficient opportunities for African scientists to pursue science-based solutions to the continent's most challenging real-life problems".