CAS-TWAS Centres: A world of excellence

In a new film, young scientists from the developing world find advanced research and valuable career opportunities at five Centres of Excellence organized by the Chinese Academy of Sciences and TWAS.

One young scientist came from India to use satellite imagery for the study of irrigated agricultural fields in his homeland. One came from Kenya to do research on water purification and sanitation technology. Another, from Thailand, learned about advanced climate modelling for rainfall prediction.

The young scientists, and the five CAS-TWAS Centres of Excellence, are the focus of a new film released by the two academies and posted on the TWAS website and its YouTube page. The 10-minute film captures the centres' role as global centres of research, and the scientists' excitement to work with world-class faculty in sophisticated labs focused on high-priority human challenges.

"Science holds the promise of solutions, but many developing countries lack scientific and engineering resources," says Bai Chunli, the president of CAS and TWAS, to open the film. "TWAS and the Chinese Academy of Sciences are working together to change that... The Centres are serving as a powerful arm of TWAS in achieving its missions."

Learn more about the CAS-TWAS Centres of Excellence.

In mid-2013, CAS invested USD6.5 million in five existing centres of excellence in an effort to add staff and upgrade facilities, and to position them as hubs of high-impact research and training, especially for scientists from the developing world. Since then, hundreds of scientists have visited for programmes ranging to weeklong-workshops to extended training courses to four-year PhD studies, all with a focus on key challenges and areas of practical need.

The five centres are:

The film was written and produced by Nicole Leghissa, a filmmaker from Trieste, Italy, where TWAS is headquartered. Several of Leghissa's recent films have focused on how scientists and research centres based in Trieste have global – and deeply human – impact.  She produced "Seeds of Science", a 2013 documentary about the close links between TWAS, Trieste and four scientists in Kenya whose work is focused on increasing food production and clean water supplies.

Her new film on the CAS-TWAS Centres of Excellence scans some of Beijing's historic and contemporary settings and visits each of the five centres. Along the way, she interviews CAS faculty leaders and young scientists from India, Kenya, Nepal, Nigeria, Pakistan and Thailand.

Several of the scientists expressed a conviction that their time at the CAS-TWAS Centres of Excellence would lead to better science – and better lives for people.

Tista Prashai of Nepal predicted that water purification skills and engineering ideas she learned at CEWE could be transferred to her home country. Kritanai Torsri concurred, saying his home country of Thailand needs the weather prediction technology and techniques he was learning at ICCES. 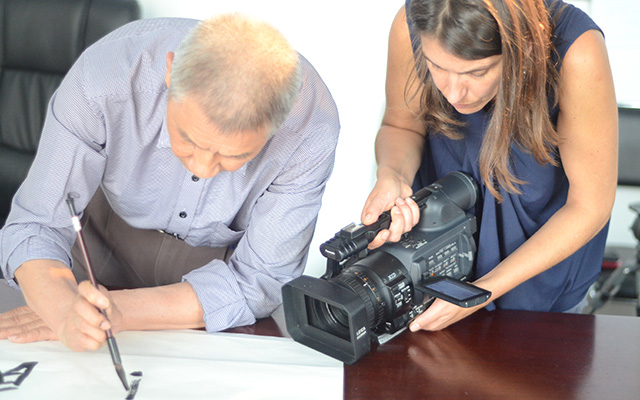 Oriola Olasunkanmi Bukola said her time at the Centre for Biotechnology provided her with new applications of microbiology for food and industry that would be useful back home in Nigeria.

"I can see myself, in five years' time, being a lecturer," she said. "With the knowledge I have learned here, I will be able to pass it on to my students and also be a great motivator, and also a mentor, especially to my female students."

"If you are a scientist," Zeng said, "you should think of how to help the people. What's the goal or vision of the centres? That everyone should benefit from the cooperation."