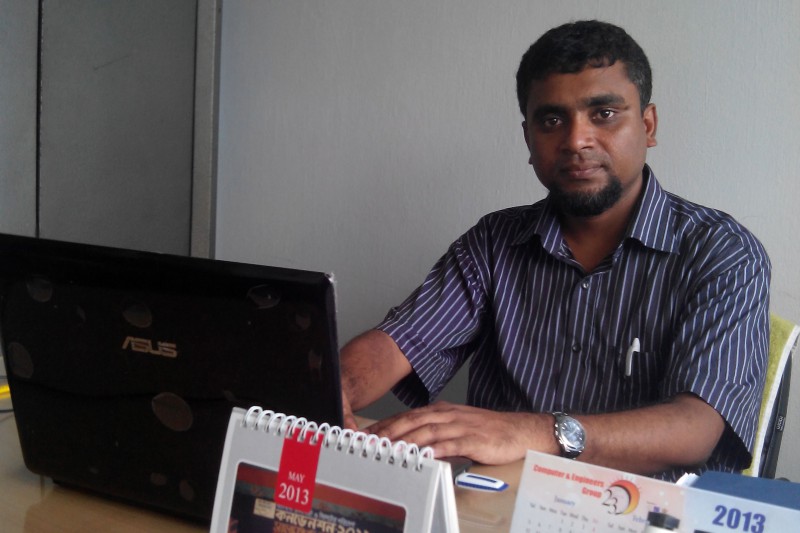 Research by Mohammad Abdul Hasnat of the Department of Chemistry at Shahjalal University of Science & Technology in Bangladesh has helped develop a reactor with electrodes that removes harmful nitrates from drinking water. Several nitrates are tied to dangerous illnesses; for example, one kind can cause a blood disorder called methemoglobinemia, and is especially dangerous for infants. Some nitrates also potentially cause cancer.

Hasnat’s device electrifies contaminated groundwater with electrodes, and the electricity sets off a chemical reaction that draws the nitrates to a collection of membranes that absorb the nitrates and remove them from the water. Hasnat notes that this is also useful because the process doesn’t remove too many minerals from the drinking water that can be healthy to consume.

The annual award is sponsored by acclaimed chemist Atta-ur-Rahman, president of the Pakistan Academy of Sciences and a TWAS Fellow since 1985. The award is given to a young chemist in a scientifically lagging country and aims to inspire young researchers in these nations to pursue chemistry careers. The award - worth USD5,000 - was first given last year, making Hasnat the second-ever winner.

The award was announced during the 24th General Meeting of TWAS, The World Academy of Sciences for the advancement of science in developing countries. The meeting drew some 300 high-level researchers, science policy leaders, educators and others to Buenos Aires for four days of presentations and discussion related to scientific issues related to the developing world.

Hasnat began his chemistry career at the University of Dhaka, in Dhaka, Bangladesh, under chemist Abu Jafar Mahmood, where from 1997 to 1999 he gained experience in ways to degrade toxic organic chemicals. He then joined the Shah Jalal University of Science and Technology as a chemistry lecturer in 2001 and established a laboratory where he and his colleagues’ work was published in several Elsevier journals.

Hasnat has traveled extensively across the globe to further his knowledge through experts in the field. He received international experience for the first time on environmental research during his stay at Indian Institute of Technology in Madras in late 2001 through an UNESCO fellowship.  He also worked at Kumamoto University in Japan from 2006 to 2009 through a scholarship from the Japanese government, where he worked on nitrate reduction. He then received a fellowship to work in electrochemistry at Liden University in the Netherlands. He has made use of a TWAS fellowship with the Universiti Sains Malaysia to further his expertise on recovering metals from waste, and visited the University of Bath (United Kingdom) to learn about how to create a new type of sensor.

He has since returned to Bangladesh, where he is using his new knowledge to develop tools to clean drinking water in a partnership with the Bangladesh Atomic Energy Commission. He has published 29 studies, most of them under his home institute, and in journals such as Catalysis Communications, Electrochimica Acta and Applied Catalysis B. He is also collaborating with the University of Bath to develop sensors for another device for detecting pollutants in water and removing them.

He has supervised 15 graduate students. “I feel pride to say that all of my research students have authorships in the peer reviewed journals although the works have been done with nominal facilities,” said Hasnat.

"In Bangladesh, we have limited facilities to perform research. We often do research using our own money, and we don't have enough instruments, funds, and materials for students," Hasnat added. "It is a more intense problem for the researchers who are holding academic positions outside of the capital city, such as my institute, which is 350 kilometres away from the capital city of Dhaka. But I am continuing research regardless of such obstacles."