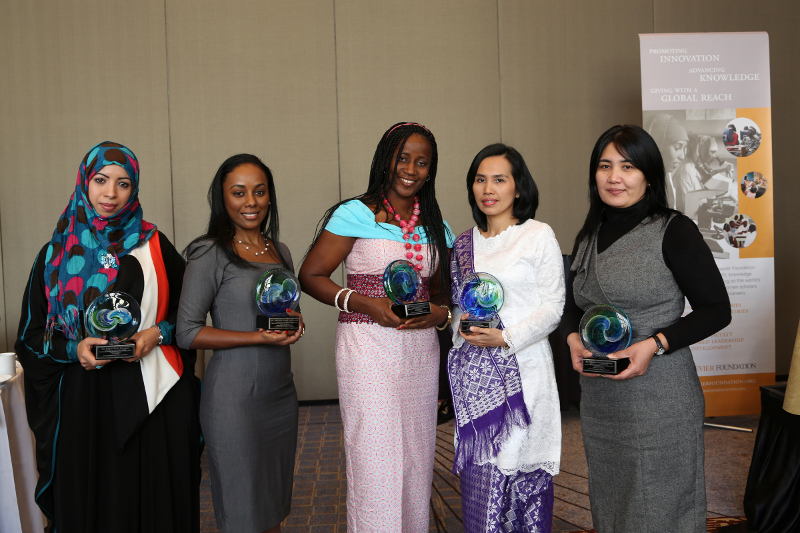 Five chemists were honoured on 15 February with Elsevier Foundation Awards for Early Career Women Scientists in the Developing World, each for research that looks to nature for ways to address cancer, malaria and other medical problems.

The winning researchers, representing five regions of the developing world, are from Indonesia, Jamaica, Nigeria, Uzbekistan and Yemen. The prizes are awarded by The Elsevier Foundation, the Organization for Women in Science for the Developing World (OWSD) and TWAS with the aim of building scientific strength and advancing scientific knowledge in developing countries. The winners will receive their awards during a ceremony at the American Association for the Advancement of Science (AAAS) Annual Meeting in Chicago.

• Central & South Asia: Dr. Nilufar Mamadalieva, Institute of the Chemistry of Plant Substances, Tashkent, Uzbekistan
Biochemistry:  For her work on the phytochemical and biological investigation of active compounds derived from medicinal plants growing in Central Asia, in particular the development of efficient nutraceuticals and the discovery of new lead compounds for the pharmaceutical industry.

• East and South-East Asia & the Pacific: Ritmaleni, Faculty of Pharmacy, Dr. Gadjah Mada University, Yogyakarta, Indonesia
Medicinal Chemistry: For her work in the field of organic synthesis, focusing on the development of tropical medicines, in particular improved methods for the synthesis of sulfoxides and their application in the preparation of biologically active targets.

The focus of the 2014 competition was chemistry.  A selection panel of eminent chemists independently selected each winner based on her achievements, finding that the best candidates all had impressive accomplishments in applying the chemistry of nature to pharmaceutical science. The Elsevier Foundation prize includes USD5,000 and all-expenses paid attendance at the 2014 AAAS Annual Meeting in Chicago. In 2015 the prize will be for physics and mathematics.

"The winners of the 2014 Elsevier Foundation prizes are impressive not just for their research, but also for their potential," said TWAS Executive Director Romain Murenzi. "Certainly these awards could bring them exciting new opportunities for research. We also believe that, over time, these researchers also will fulfill their potential as teachers and mentors, as partners in international projects and as advisers to governments. Such leadership can make a long-lasting contribution to global science."

"These five women, like all women undertaking scientific research in developing countries, will certainly have faced challenges on the road to this award," said Fang Xin, president of OWSD. “But their determination, commitment and enthusiasm have paid off. The award is recognition that they are excellent scientists and that their research has made an impact both regionally and internationally. They are an inspiration to all young women considering careers in science."

Samira Omar Asem, vice president for the OWSD Arab Region, emphasized that “OWSD and TWAS see this award as vital for encouraging women in developing countries to be more involved in science and technology and to make a more significant contribution to social and economic developments.”

David Ruth, Executive Director of the Elsevier Foundation, said: “Professional visibility is crucial to developing high-profile international scientific careers, especially for women.  The Elsevier Foundation provides support to early-career women scholars through our New Scholars grant programs and mentoring, research retreats, professional visibility, childcare, work-life integration and recognition programs. The awards for these impressive women scientists represent a cooperative effort supported by Elsevier, OWSD, AAAS and TWAS to build research capacity and advance scientific knowledge throughout the developing world – and what better place than the annual AAAS conference to raise awareness among scientists, policymakers, journalists and the public about the need to retain and celebrate women scientists.”

In interviews, the winners acknowledged that the awards could have a significant impact on their work. Dr. Ritmaleni, from Indonesia, said, "Women need science, science needs women and they need to work together."

Dr. Nilufar Mamadalieva from Uzbekistan, on hearing the news that she had won the award for Central and South Asia, felt honoured that her hard work in science had been recognized. “This Award gives me confidence and confirms that I’m going for the right goal,” she said.

The winner for the Arab region, Dr. Eqbal Dauqan from Yemen, stressed the impact the award would have on women from her region. “The prize is very encouraging for Arab women and is the result of efforts to enhance scientific research in the Arab world”, she said.

Dr. Simone Badal McCreath, from Jamaica, said she was “overwhelmed and truly humbled to be receiving such a prestigious award. It will no doubt inspire my students, mentees and the community of Jamaican women,” McCreath said. “Such an award is also vital towards increasing awareness and consequently interest among the private sector and governmental communities and will encourage the development of an anti-cancer research facility of excellence in Jamaica and, by extension, in the Caribbean.”

More information on each candidate's achievements can be found at the Elsevier Foundation website.