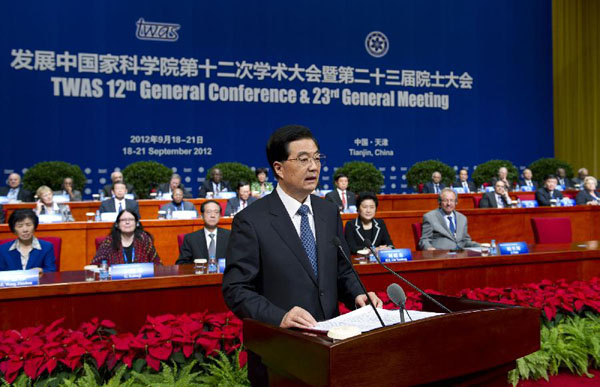 The President of the People's Republic of China, Hu Jintao, has officially inaugurated the TWAS 12th General Conference, being held in Tianjin.

In front of an audience of 2,000 scientists, heads of academies and representatives of international organizations, Hu Jintao affirmed that "Science and technology is the crown jewel of human wisdom.

"Take a look at the history of human development," he continued, "and you'll see that science and technology have been with us throughout the rise,growth and prosperity of civilization."

He went on to warn, however, that today's unprecedented growth in population and the demands we are making on our environment are creating a series of challenges, such as food security, energy security and climate change.  He was confident, though, that science and technology – especially when linked to innovation – can help us overcome these challenges.

To make his case, he highlighted some of China's recent achievements, especially in the areas of information technology, biotechnology and energy technology. "Such solutions help make the lives of people healthier and happier," he said.

He also affirmed China's commitment to international scientific collaboration (see CCTV site), and especially collaboration between developing countries, an issue central to the objectives of TWAS. In fact, Hu Jintao – who also opened TWAS's previous General Conference in China in 2003 – confirmed his appreciation of TWAS's role in supporting science in the South by announcing a USD1.5 million contribution to the Academy from the government of China.

In his response, TWAS president, Jacob Palis, thanked President Hu Jintao for his generous contribution as well as for the Chinese government's kind hospitality in hosting the TWAS meeting for the third time in China.

President Hu Jintao then presented the TWAS Medals and Prizes – including the 2012 edition of the Ernesto Illy Trieste Science Prize – to the recipients.