From Colombia, a lesson in resilience

A new book from TWAS and COMSATS profiles Colombia’s Centro Internacional de Física, which has built a reputation for excellence in Latin American science despite shifting financial and political conditions.

UPDATE 12 November 2013. The new book from TWAS and COMSATS profiling Colombia’s Centro Internacional de Física is now available in a paperback edition. To receive a copy free of charge, click on "contact" at the top of this page and give us your mailing information. 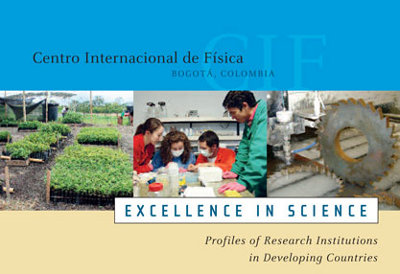 The story of the Bogotá-based research center is a story of creative adaptation by a research organization, even when it is confronted with financial, social and political challenges. The new book – the latest in the TWAS Excellence in Science series – credits two broad factors for its success: Innovative research that adapts to a changing landscape, and the dedication and perseverance of its researchers.

The Centro ­– CIF, for short, and the International Centre for Physics in English – emerged from a humble and uncertain beginning to make an impact throughout science and engineering in Colombia. The evolution of this research centre reflects a recognition: to survive in a difficult environment, you sometimes have to follow opportunities wherever they take you, while assuring that your science is always strong.

Today, its work ranges from the fundamental questions on pure physics to optical and material sciences, agriculture, infectious disease and the effects of climate change. And it has had an important impact designing and producing devices for the industrial and energy sectors.

The new book is published with support from COMSATS, the Commission on Science and Technology for Sustainable Development in the South, an inter-governmental organization established in 1994 and headquartered in Islamabad, Pakistan. It is the 12th book in the Excellence in Science series, which debuted in 2007. It is the second published with the support of COMSATS, which represents 21 member states and 18 centres of excellence; the organization works to promote South-South cooperation in the fields of science and technology that are most relevant to socio-economic development.

The new book and past volumes in the series are available online at will soon be available in softbound paperback edition from info@twas.org.

Why was CIF selected to be part of these series? Perhaps a quote in the book by CIF Director Eduardo Posada offers a clue: “Quality is the key," he said, "We have been able to have high-quality groups that do high-quality research."

It was physicist Abdus Salam, the Pakistani Nobel laureate, who inspired Posada and two other CIF founders, pioneering Colombian physicist Humberto Rodríguez and Italian theoretical physicist Galileo Violini. Salam was the founder of the International Centre for Theoretical Physics and TWAS, both based in Trieste, Italy, and both organizations have maintained ties with CIF since its founding in 1985.

The new book covers the CIF's history, with a candid assessment of some obstacles that researchers and its leaders have overcome through the years, and it explores in detail its varied lines of research and development.

In biophysics, CIF scientists work on leishmaniasis, a tropical disease which affects about a thousand people of Colombia every year, trying to understand how the parasite invades the host cell.

For almost a decade, a group of researchers studied cosmic background radiation by measuring it from a radio telescope located in Colombia. This lab was associated with the group led by Nobel Prize winner George Smoot at the University of California at Berkeley.

In the 1990s, CIF was the first in Colombia to produce holograms for the art and business sectors in the nineties. The optical research focuses currently on sophisticated devices such as Lidar (Laser Interferometry Detection and Ranging). The Material Science group produces and grows thin films which can be used in optics and engineering. Recently it has been working in the development of nanotechnology-based materials.

CIF researchers also work with Colombian farmers and ranchers, applying science to local practices for producing panela (brown sugar) and reducing pollution from palm oil production. A local farmer who worked with CIF raved about the collaboration: “Panela producers have now a better business, because we learned how to manage the whole system, from plagues and water to sowing sugar cane. We have now a better quality of life.”

Having in mind the consequences of climate change, scientists are helping cattle ranchers and coffee growers to develop strategies to adapt and protect water resources. As a result of biotechnology research, CIF got a patent for the development of a vaccine-like treatment for plants, based on the biochemical mechanisms used by flowers to resist pathogens.

CIF has pioneered industrial innovation as well. Several devices have been designed by its engineers and physicists, mainly for Colombia's electricity producers. For example, CIF scientists have worked to develop equipment for monitoring the quality of electrical energy. It has also worked with industry to develop monitors which check the levels of hazardous methane gas in coal mines, and on a system for collecting the methane for use as fuel.

CIF is the ‘father’ of some startups such as Teclaser, a firm based in Bogotá, founded in 1997, which started with an old but usable laser machine that made precise cuts to different type of materials. Teclaser was the first company that offered this service to Colombian metal-mechanic industries, as well as to business sectors ranging from plastics and wood to advertising and architecture.

Today, successful spin-offs provide a crucial part of CIF's revenue, along with funds from the public sector and industrial projects.

In Posada's view, three decades are just the beginning. TWAS Executive Director Romain Murenzi agreed. "Over the next 30 years, CIF, COMSATS and organizations like them will play a vital international role," Murenzi wrote in the book's foreword. "They are models and guides for less developed nations, and they show all the world how research drives innovation and economic growth and improves human lives."