The number of computed tomography (CT) scans has increased threefold since 1993. These procedures, prescribed to more than 70 million patients worldwide in 2007, have now become commonplace in both the developed and many parts of the developing world. 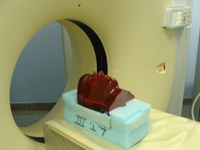 While the benefits of CT scans in terms of healthier and longer lives are undeniable, studies suggest that as many as half of the scans cannot be medically justified and, in fact, carry serious adverse health consequences due to overexposure to radiation.

Studies that indicate the widespread overuse of CT scans come as no surprise to Marlen Pérez, a professor and researcher at Central University 'Marta Abreu' of Las Villas in Santa Clara, Cuba. Pérez, who specializes in radiation dose optimization in medical imaging. "Most doctors," she advises, "really need to think more about radiation dosages when ordering CT scans."

Pérez, who discusses CT scans and public health in the most recent edition of the TWAS Newsletter, is among a growing number of scientists and health-care technicians who believe that technological advances in medical imaging are outpacing safety concerns.

Trained in medical physics at the Institute for Nuclear Science and Technology in Havana, she acknowledges that CT scans, which provide more detailed cross-sectional images than X-rays, "represent one of the most significant recent advances in medical science."

Yet, an average CT chest scan, she says, "is equal to some 500 chest X-rays." The problem, she notes, is exacerbated by the fact that physicians "rarely keep track of a patient's cumulative doses." These factors have prompted the International Atomic Energy Agency (IAEA) to caution against the use of unwarranted multiple scans.

"The IAEA," she says, not only recommends broad international standards for radiation exposure but also suggests that these standards be adjusted to take account of the specific circumstances found in each country." For example, she observes that Cubans tend to be both shorter and slimmer than people in the United States. She also notes that the equipment used in Cuba tends to be older. In addition, Cuba produces its own radiopharmaceuticals (radioactive agents that are used as tracers for diagnosis). All of these factors, she says, "must be taken into account when determining doses."

Studies suggest that efforts to optimize dosages could reduce radiation doses by 20% to 70% in many situations. In Cuba, for example, the level of radiation used for kidney diagnosis has been cut in half in the past decade.

Such reductions in the use of CT scans highlight the need to increase research and clinical trials on optimization. These efforts could help address the growing concerns that CT scans, when unnecessarily and excessively used, place patients at risk of cancer from radiation exposure.

To read the complete text of the article, download the PDF from here.