For 50 years, the International Centre for Theoretical Physics has worked to advance science in developing countries. At an anniversary celebration, world policy and science leaders shared memories – and visions for the future 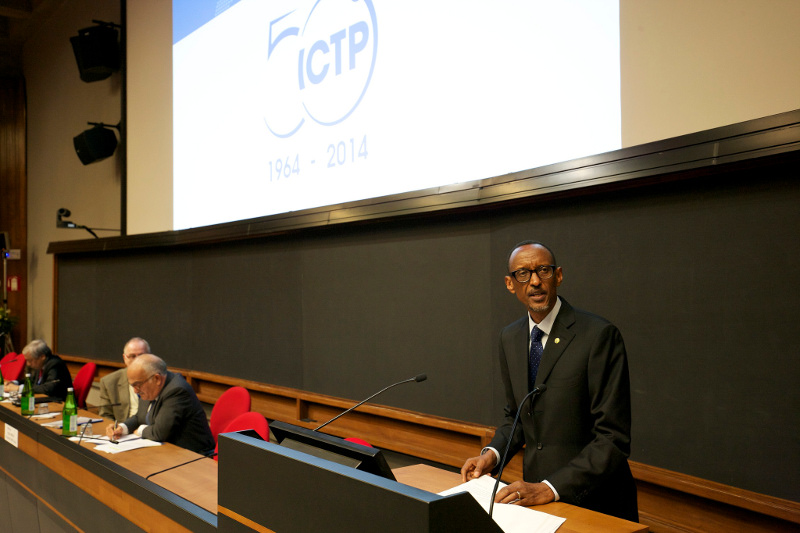 The Abdus Salam International Centre for Theoretical Physics marked its 50th anniversary with a celebration – part high-level scientific conference, part gala birthday party – that drew policy and science leaders from around the world to its campus in Trieste.

The four-day event, from 6 to 9 October, featured visits from Rwandan President Paul Kagame; UNESCO Director General Irina Bokova; and Prince El Hassan bin Talal of Jordan. There were leaders from such prominent science bodies as the International Atomic Energy Agency (IAEA), the European Organisation for Nuclear Research (CERN), the Pakistan Atomic Energy Commission and the World Meteorological Organization. Also attending were at least three Nobel laureates, former presidents and prime ministers of other nations, and, in Italy, top officials from the Ministry of Foreign Affairs, the province of Friuli Venezia Giulia and city of Trieste.

In a letter from Rome, Italian President Giorgio Napolitano joined the others in praising ICTP's positive global impact. The centre's "history of excellence transcends national borders," Napolitano wrote, "and now embraces an international panorama, allowing scientists and experts from different countries to compare and share experiences for the benefit of technological progress in the entire world."

TWAS also had a prominent role in the celebration, and basked in ICTP's glow. Some two dozen members of TWAS attended, many of whom have had close ties with ICTP and its founder, Abdus Salam. Many speakers regarded TWAS as ICTP's younger sibling, both sprung from the vision and energy of founder Abdus Salam of Pakistan, himself a Nobel laureate. 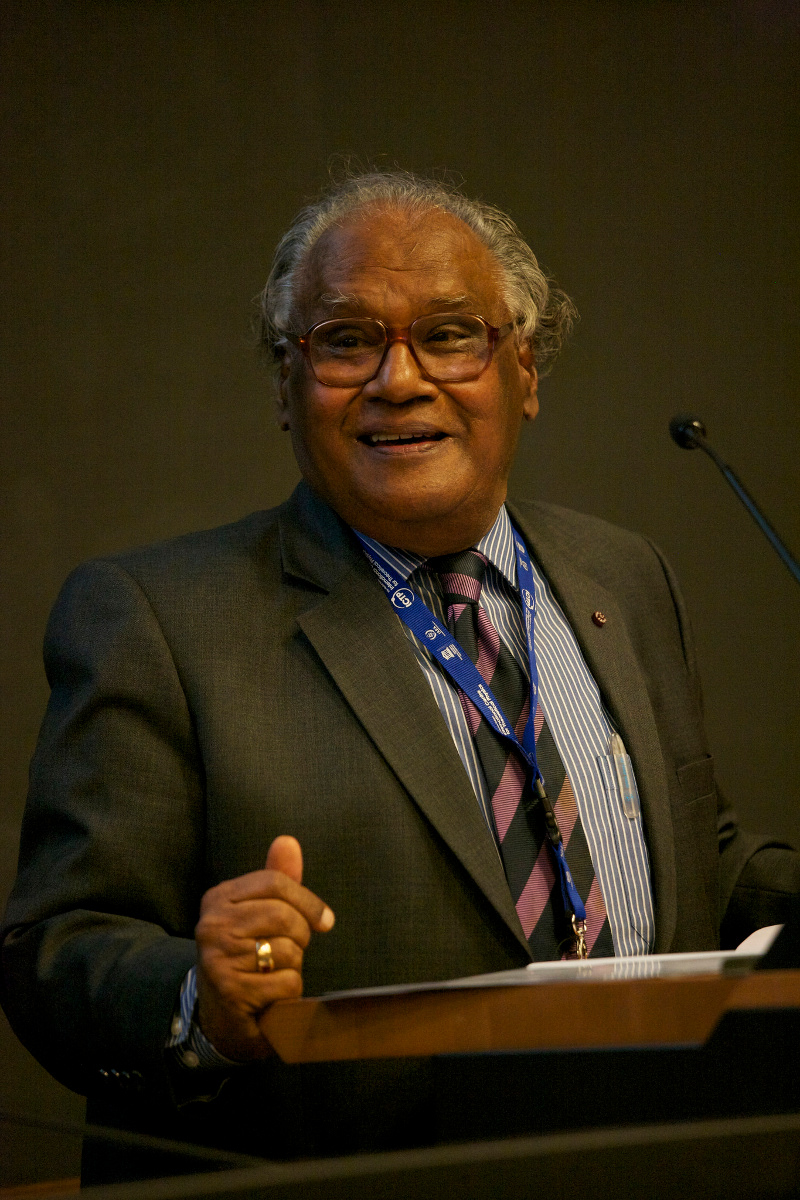 Salam and his colleague, Italian physicist Paolo Budinich, received broad praise in the opening ceremonies. In the early 1960s, they were among a small corps globally who recognized the importance of science and technology for the progress of the developing world. And while their vision was far ahead of its time, even they probably could not have imagined how much their core idea would help to inspire and propel global change.

Salam and Budinich "had a dream more than 50 years ago, to create an institution that can bring scientific excellence to all corners of the world," said ICTP Director Fernando Quevedo of Guatemala. "They managed to turn this dream into a reality." Over the years, Quevedo added, ICTP "has become more and more relevant to the needs of our planet and its inhabitants, for science as a key component of our culture, science for development and as one of the most effective means of our survival."

Others joined in praising Salam – his vision, his character, and his political skill.

Bokova called him "a scientific genius (and) a true humanist, because science is also about humanism."

C.N.R. Rao, the renowned Indian chemist and former president of TWAS, recalled Salam as a man with "a great heart."

“There is one scientist who really stood for the right things in the world and worked for it and created institutions," Rao told the audience. “Salam is a man who cared for the poor, cared for equality and cared for the well-being of all.”

"He was probably one of the very few citizens of the developing world that appreciated the power of science in improving the quality of life of people at large," added ICTP Deputy Director Seifallah Randjbar-Daemi of Iran.

Antonino Zichichi, a TWAS Fellow from Italy and president of World Laboratory, called Salam "a formidable example of how all of us should be, for science, joined in human solidarity.”

Another TWAS Fellow, former Jordanian Prime Minister Adnan Badran, president of Petra University, said Salam was an "outstanding scientist," but also a man "who could move vision and ideas into practice." Several speakers noted that Salam, whether he was working with a graduate student, or an established scientist or a top-level policymaker, could employ a blend of charm and intellect that persuaded others to join in his vision and help to bring it to life. 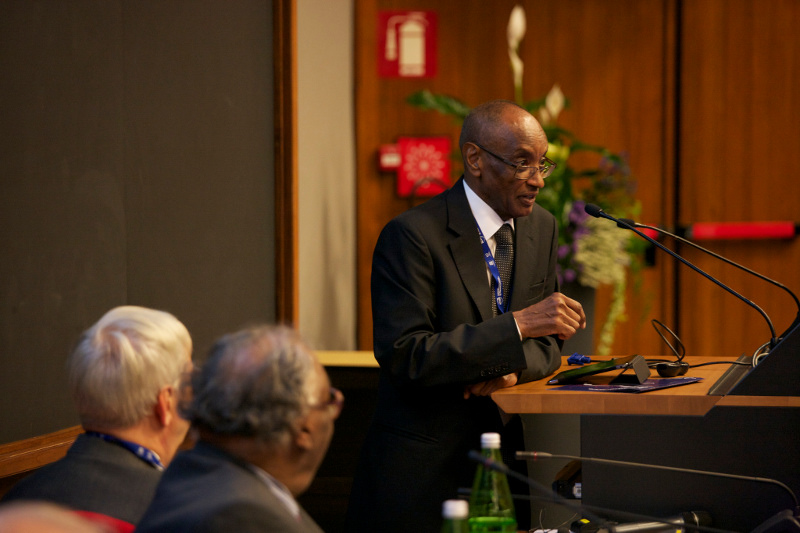 Mohamed H.A. Hassan worked directly with Salam for many years as TWAS's first executive director; he now serves as TWAS treasurer, co-chair of IAP–the global network of science academies, and chairman of the United Nations University Council. Salam "was probably the best science diplomat I have ever met in my entire life," Hassan told the audience.

He was "a person who could initiate so many things," Hassan continued. One of Salam's most important ideas, he said, was on the need to engage with policymakers. "Salam always said, 'without political decisions in countries themselves, science can't flourish'," Hassan recalled.

Even in ICTP's early days, during the tense years of the Cold War, the campus was a hub of international networking and collaboration. "Those young physicists...gained a lot by living on this campus, interacting with scientists from all over the world," Badran recalled. "They were enriched, and they came back home with international vision and outlook on science."

Kagame, a strong advocate for science and technology in Rwanda and other developing nations, echoed those themes in a speech at the opening ceremony.

"The tools pioneered at ICTP, which have since been adopted more widely, aimed to stem the 'brain drain' by bringing young scientists from developing countries into top-notch research networks," he said. "This made the beneficiaries better able to build scientific communities in their own countries, and helped to reduce the isolation that caused precious talent to be wasted. The ICTP’s strategy also recognised that, at the end of the day, what is important is to use science to speed up social and economic transformation in the developing world."

The Power of Multiplication 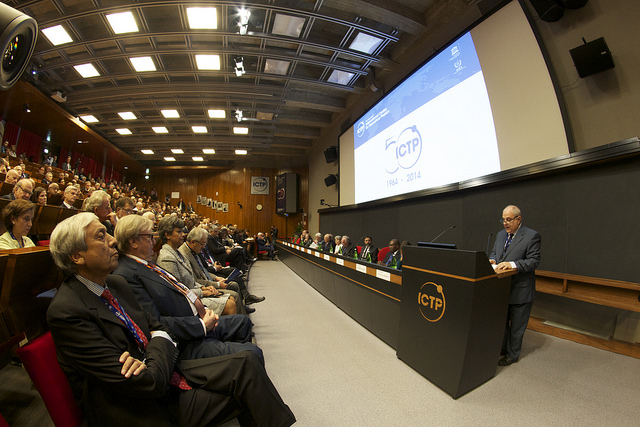 While ICTP was applying itself directly to research and training, it was also helping to generate a new family of science centres in Trieste that were focused on the developing world and on global cooperation.

There, too, Salam and Budinich were visionary, said Mario Giro, under secretary of state in the Italian Ministry of Foreign Affairs.  The creation of ICTP in 1964 would, in time, establish Trieste as a global centre of scientific research with an orientation to the developing world.

With the passage of years, ICTP’s culture of scientific ambition gave rise to the "Trieste System". The IAEA and UNESCO would come to have a major role. Salam, with help from Budinich and others, would found TWAS in 1983, and today its offices remain on the ICTP campus. Soon other major organizations would join in this system: the International Centre for Genetic Engineering and Biotechnology (ICGEB); the International School for Advanced Studies (SISSA); Elettra Sincrotrone Trieste; and IAP – the global network of science academies, among others.

"Trieste is thus a model of integration among organisations that have been working for many years, gathering students and researchers from a wide range of countries," Giro told the audience. "In the future, that will certainly create  more synergies for the development of science for sustainable growth. On behalf of Italian Prime Minister Matteo Renzi, I tell you we are proud – we are very proud – to have you all here."

Giro praised the work of TWAS in building science for the developing world through grants and fellowships, and noted that its 1,100 members include 15 Nobel laureates. Bokova, the UNESCO director general, noted that TWAS had worked with UNESCO on a programme that allows researchers from the developing world to visit centres of research excellence throughout the South.

Added Jordan's Prince Hassan: "TWAS believed, and believes, in science diplomacy and the importance of effective partnerships between scientists, policymakers and diplomats."

"Every possible source of scientific potential" 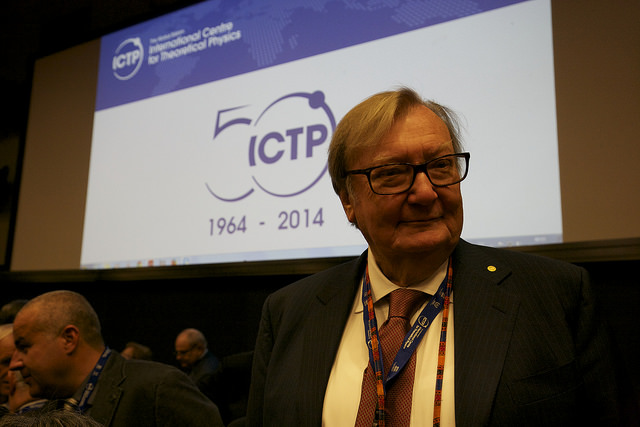 As part of the celebration, Nobel laureate Carlo Rubbia of Italy, a TWAS Fellow, gave a public talk in Trieste on the future of energy. And TWAS Executive Director Romain Murenzi was featured in sessions on science and development in Africa and women in science.

Even in conservative cultures, the aspirations and opportunities for women are changing, Murenzi said. "Women, no less than men, want to develop their skills and pursue beneficial new discoveries. As individuals, they benefit if science is open equally to men and women. And our societies benefit, too. The challenges confronting humanity are so important – in hunger, climate change, energy production – that we must find every possible source of scientific potential and develop our full potential."

The programme reflected the reality that ICTP, so successful in its first 50 years, is expanding its mission beyond physics and math to other disciplines and other goals: Advancing women in science. Renewable energy. Climate change.

The work begun by Abdus Salam and Paolo Budinich “is far from complete”, agreed Rwandan President Kagame. “Indeed, it has never been more urgent. The world today is more interconnected and interdependent than ever before. Global problems can originate from anywhere, but so can solutions to those problems.

“That is the promise of ICTP’s next 50 years, which it is up to us to seize.”

Sean Treacy contributed to this report