It's not the African pink flamingos – strutting gracefully in the shallows of Kenya's Lake Nakuru – that capture the attention of Hamadi Iddi Boga. It's what's beneath their feet. 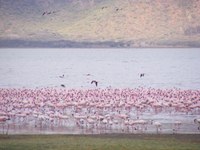 And what's beneath their feet are billions and billions of microorganisms that play an important role in maintaining the health of one of the world's most unique and colourful ecosystems – the saltwater lakes of the Great Rift Valley in eastern Africa.

Boga, an associate professor of microbiology at Jomo Kenyatta University of Agriculture and Technology, in Kenya, spoke at the TWAS 11th General Conference, in Durban, South Africa. He heads a university research team that receives financial assistance from the TWAS grants programme for scientifically lagging countries.

The Great Rift Valley is where archaeologists have uncovered skeletal remains of some of the earliest ancestors of humans, including 'Lucy' (Australopithecus afarensis), who is believed to have lived more than 3 million years ago. It's also home to the African pink flamingo (or lesser flamingo, Phoenicopterus minor) – the brightly coloured, spindly legged bird that is a global symbol of beauty and elegance.

The region also is home to a string of shallow alkaline lakes – five in all – that provide the habitat for soil-bound microorganisms capable of living in extreme environments saturated with sodium carbonate. Similar lakes can be found in Egypt, Malawi and Russia. But none have pink flamingos.

"Each cubic millimetre of water in these lakes – equivalent to the amount on the tip of an eye dropper – contains more than one billion microorganisms", says Boga. "Yet, the only evidence of their existence that humans can see is the languid green-tainted mats that stretch across the surface of the water."

Scientists have recently discovered that diverse species of microorganisms living within the same environment often function as cooperative communities. Each species has its own unique role to play in the complex functioning of the ecosystem. That's certainly the case in the Great Rift Valley.

Boga explains that the lakes' bountiful cyanobacteria – or blue-green algae – are photosynthetic organisms, which depend upon light and carbon dioxide as primary sources of energy for their sustenance and growth. Their vast numbers make them a primary source of biomass in the region. But the cyanobacteria's contribution to the ecosystem would not be possible without the work done by other microorganisms.

As the cyanobacteria decompose, anaerobic bacteria use light and chemical compounds as a source of energy. In the absence of oxygen, these bacteria turn the organic matter into acetate, lactate, butyrate, hydrogen and carbon dioxide.

Then, microbes called Archaea – which can live in environments as forbidding as hot springs – transform the soil-trapped hydrogen and carbon into methane, which is released into the atmosphere, marking the completion of the biological cycle.

Invisible microorganisms that die, decompose and wind up as methane cannot, of course, match the allure of thousands of long-legged pink flamingos wading in the shallow lakes. But that doesn't minimize the microbes' importance to the health of the ecosystem.

In fact, Boga thinks that disruptions in the biological cycle of microbes may account for the recent die-offs and mass migrations of the flamingo populations in Lake Nakuru, which have occurred on two different occasions over the past decade. Scientists remain baffled by the problem, but poisonous bacteria could be one of the causes.

"In fragile environments such as those found in the Great Rift Valley, it's important to understand the impact of all organisms on the ecosystem", Boga asserts. "Such knowledge", he says, "could help us understand why flamingos have periodically died off in such numbers – and how the flamingos that leave know when it's safe to return. That is something they always do, despite previous hardships."

But it's not only basic knowledge about the ecosystem that Boga is seeking to discover. He and his team are also trying to extract potentially valuable enzymes for commercial use.

"We have good reason to believe that research will uncover many other enzymes with commercial value", Boga says. His team, for example, has begun to study enzymes that may be able to break down the cellulose of woody plants into sugars to facilitate the production of second-generation biofuels. "This is a very high-risk project. But it could result in a big payoff", he adds.

"Funding from TWAS has made it possible for us to probe areas of scientific importance and possibly commercial value.  We are indeed thankful for the Academy's generous contribution to our efforts, and we hope that the investment proves worthwhile both for science and society", observes Boga.

TWAS launched its grants programme for research groups in scientifically lagging countries in 2002. The programme provides annual grants of up to USD30,000 for 18 months. For additional information, see TWAS Research Grants.