Mario Giro, the undersecretary at Italy's Ministry of Foreign Affairs, expressed strong support for the mission and work of TWAS during a visit with the Academy's executive director and staff Monday 4 November in Trieste. 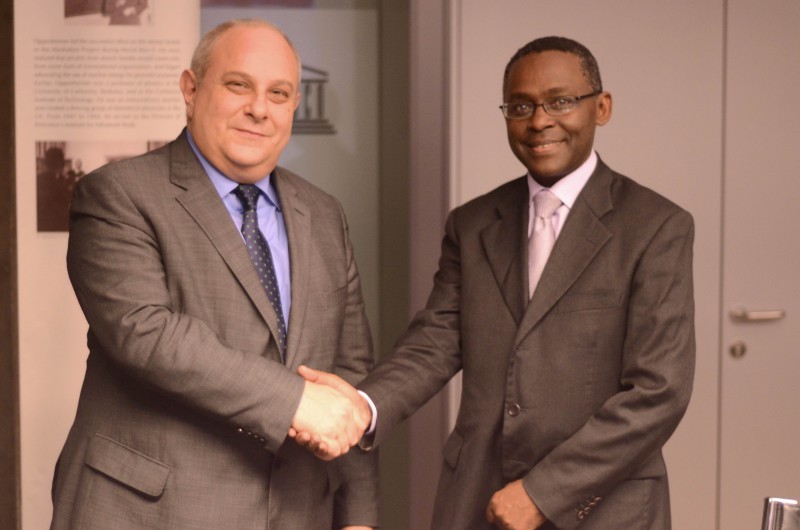 Giro praised the results obtained by TWAS during three decades of work. Italy already provides significant core funding to TWAS, and Giro pledged to seek other ways to support and advance the Academy.

“The world is experiencing a severe economic crisis,” he observed, “and I cannot speak of budgetary advancement. However, my personal feeling is that Italy should be proud of TWAS. We at the Ministry should, and indeed will, keep preserving and supporting this organization, for its well-credited international weight in disseminating science at the international level.”

Giro has extensive experience in building international relations and cooperation. He has worked as a peace mediator since the early 1990s. His skill has been applied in a range of nations and regions, including Algeria (1994-5), Kosovo (1998-9) Togo (2003), Libya (2011) and Syria and Senegal (2012). His appointment as undersecretary at Foreign Affairs in the government of Italian Premier Enrico Letta began on 3 May 2013.

The meeting at the Miramare campus, where TWAS has its headquarters, came at the end of a day spent with representatives from the Trieste System, including IAP, the global network of science academies and IAMP (the InterAcademy Medical Panel) (http://goo.gl/pNdt0j); the Organization for Women in Science for the Developing World (OWSD); The Abdus Salam International Centre for Theoretical Physics (ICTP); Area Science Park; the International Centre for Genetic Engineering and Biotechnology (ICGEB), and Elettra – Synchrotron.

The meeting with TWAS featured a brief presentation by Executive Director Romain Murenzi on the Academy's global work and impact. In 2013, TWAS has awarded 90 research grants to scientists in the developing world, totaling USD1.8 million. TWAS also awards more than 600 fellowships per year to talented young scientists who want to pursue their PhDs at prestigious institutes in the South.

“One of our goals is to increase this number, to at least 1,000, by expanding cooperation with countries such as Japan, Australia and Germany," Murenzi said. "And part of this success stems from the annual contribution that the Italian government has granted to TWAS with a law, endorsed in January 2004.”

Giro cited the solidity of TWAS’s results, praising the way that it has worked to help researchers and policymakers to address local and global problems through science. He also urged TWAS to do more to showcase its results at the national level. “When it comes to funding science and supporting research," he observed, "people in Italy tend to be pessimistic. But TWAS and its work tell us a different story”.