Academies of medicine across the world need to cooperate to enhance developing countries' ability to conduct, share and use their research, said Dr. Jo Ivey Boufford, co-chair of the InterAcademy Medical Panel (IAMP), at an event in Grignano, Italy. 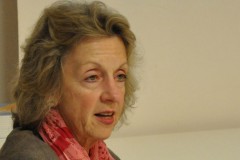 Countries are facing numerous new challenges to global health, such as the spread of drug-resistant infections and climate change’s effects on food and water availability. To improve public health and contribute to economic growth and innovation, IAMP says, nations with strong economies must cooperate to elevate the ability of low- and middle-income countries to conduct health research, while also communicating ways to put that research to good use.

The ability of low- and middle-income countries to conduct, share and apply research is largely hindered by the absence of scientific infrastructure. But Boufford noted that even nations such as the United States, which have the infrastructure for research, still struggle to apply their research and share it with the rest of the global community, because many scientists are more interested in the science for its own sake than its application.

"So a role we think the academies can play is to begin to help apply this research", said Boufford, who is also the foreign secretary for the US Institutes of Medicine and chair of the group that prepared the IAMP statement.

The statement calls for efforts to promote developing nations' capacity for research as a way to address numerous issues of growing importance in the South. Urbanization worldwide is leading to greater prevalence of respiratory diseases and changes in patterns of how diseases spread. Globally, life expectancy has grown by about 30 years on average, and some nations are dealing with the challenges of an aging population for the first time. Also, as drug-resistant strains of infections emerge, science will have to keep up.

The IAMP statement is endorsed by more than 40 national academies of medicine worldwide, and urges member academies to use their position to draw attention to this need. The event took place at Science Centre Immaginario Scientifico in Grignano, Trieste. Attendees toured the science museum before listening to Boufford’s presentation, then took part in a discussion about the state of research in developing countries.

The statement’s premise, Boufford said, is that, while the memberships of medical science academies include enormously influential people, those people have not historically worked as a group, used their influence to sway governments or made their information available to the public.

"So part of the work of IAMP, IAP and TWAS is to help these academies see the role they can play in their own society", she said. "This statement is really targeted toward academies themselves and networks of academies to use that kind of influence."

Engaging the public is important, because recent efforts to contain high-profile epidemics have shown that public interest carries a lot of sway, Boufford said. "A lot of media attention in the HIV/AIDS crisis and a lot of political attention and investment really created an environment in which the public began to appreciate the importance of research". she said. The public could clearly see the difference research made in controlling diseases like HIV, tuberculosis, and malaria.