It's important for young scientists work overseas, says the influential Brazilian physicist. And if possible, it's important that they return home to strengthen their nations and their people. 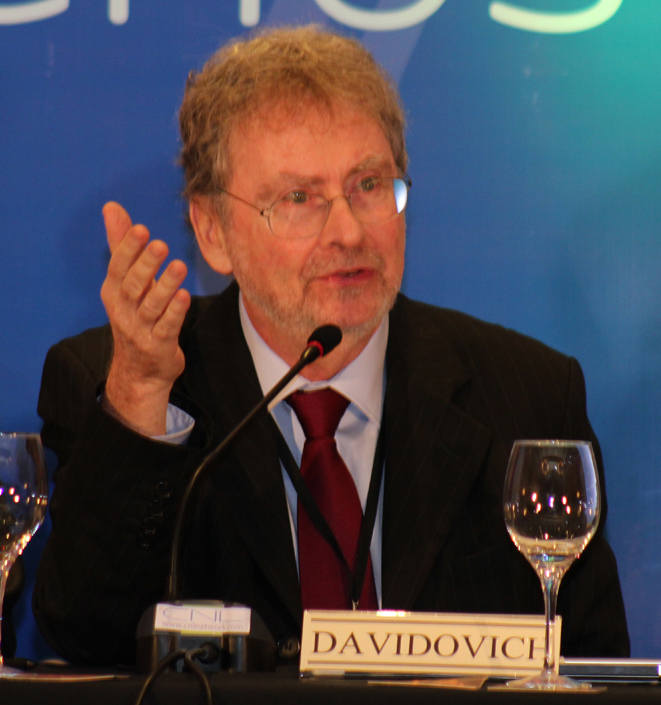 Luiz Davidovich is the personification of an international science scholar. Born in Brazil. PhD in the United States. Visiting positions in France, Germany and the UK. Member of national science academies in Brazil and the US. Along the way, though, he learned an important lesson: Physics is "a universal endeavour", so a young scientist from the developing world needs the experience and networks that come from working overseas. But back at home, "there is much to build, there are big challenges, and they should be part of it."

Elected a TWAS Fellow in 2002, Davidovich today is a professor of physics at the Federal University of Rio de Janeiro. During the TWAS General Meeting in Buenos Aires, Argentina, he organized a symposium on Quantum Information and Quantum Computing with 2012 TWAS Fellow Pan Jian-Wei, a professor at the University of Science and Technology of China. Later, in an e-mail interview with TWAS Public Information Officer Edward Lempinen, Davidovich emphasized the importance of physics for the developing world, and the social responsibility of physicists and other scholars.

Growing up in Brazil in the 1950s and '60s, how did you come to realize that you wanted to pursue research in physics? Along the way, did you encounter important encouragement or significant obstacles?

In middle school, I decided to take a correspondence course on the topic of radio, TV, and electronics, which involved building radios and amplifiers, and got me curious about the 'inner workings', about what was going on inside the electric wires, electronic tubes and transistors. I also enjoyed very much mathematics, but the big push towards physics came when I started to read books on physics written for the general public. I remember one by Einstein and Infeld, and also books written by George Gamow.

I was afraid, however, that physics would not be economically viable as a profession, so I took entrance exams for both engineering and physics courses. I passed both, but after two weeks I got convinced that I should follow my heart and plunge into physics, thanks also to a wonderful undergraduate physics teacher.

You received your PhD in the United States and did additional work in Europe. Many top physicists from the developing world chose to make their careers in the developed world. Why did you return to Brazil?

I went back to my roots. As a student, I was very much involved in the movement against the military dictatorship (the result of a military coup in 1964, one year before I entered university). Participation in a movement like that changes you on a permanent basis. You get aware of the responsibility of each citizen in the development of society, in the establishment of democracy, in the reduction of inequalities. After my stay abroad, I thought that, through my work as scientist and professor, I could have a much higher social impact in Brazil than in the United States or Europe. Family and friendship ties also played a very important role.

At the TWAS General Meeting in Buenos Aires, you organized a symposium on quantum information and quantum computing. Does research in those fields have applications of specific value for the developing world?

Research on quantum information and quantum computing may have important applications, useful for both developed and developing worlds. One possible application is quantum cryptography, that is, securing the transmission of information. One envisages also the possibility of having efficient computers that may realize certain tasks faster than classical computers (like, for instance, databank search), and simulate efficiently complex systems (an idea introduced in the 1980s by Richard Feynman, Nobel laureate in physics).

As recent facts have indicated, securing communications is a universal concern nowadays, and one cannot depend on the technology developed in other countries for that purpose. But there are other concerns, of a more general nature. It is very important that all the countries have the possibility to have access and contribute to the frontiers of knowledge. More than ever, they are intimately connected to economic and political power. One often thinks about short-range applications of scientific research, however unexpected applications of basic research have promoted technological revolutions that have deeply affected our quotidian.

Often, when people think of science and its importance for the developing world, they think of science with specific applications – for agriculture and health, for example. Physics, on the other hand, seems esoteric and abstract. In your view, is it important for developing nations to build expertise in physics? If so, why? Are there particular applications that are valuable?

When a bright group of young physicists developed quantum physics in the beginning of the 20th century, they did not have the least idea of what would be the application of that new and revolutionary view of the world. Their aim was to understand nature, to marvel at the subtleties of the microscopic world. None of them could imagine that their work would allow the development of new technologies that have had a strong impact on our quotidian life, like the laser, semiconductors in computer chips, magnetic resonance imaging in hospitals, atomic clocks, the GPS system.

In 2001, Max Tegmark and John Archibald Wheeler estimated, in an article published in Scientific American, that about 30% of the US gross national product is based on inventions made possible by quantum mechanics. This is just one example of the benefits of basic science, which should not be circumscribed to developed countries. The distance between fundamental discoveries and applications is now shorter than it was at the time of the pioneers of quantum physics.

Basic results in physics have repercussions in metrological standards, in new materials that have a wide range of applications, in new energy sources, in high-technology devices that increase the wealth of the countries that support the full basic science-technology-innovation cycle. More and more, nowadays, development relies on knowledge. Having access to the frontiers of science, participating in the unveiling of new discoveries, is an essential ingredient for a sustainable development, and this is a must for developing countries that need to overcome a huge economic and social gap.

Should government policy seek to support and encourage physics research? If so, why?

It is clear that support for physics research cannot be considered as expenditure, but as investment, one of the most profitable ones. Huge returns of this investment come in the form of innovations that benefit society as a whole.

Can you point to any specific cases where physics research has had a beneficial human and/or economic impact for nations or regions in the developing world?

There are many examples. In Brazil, for instance, physicists working with lasers have had a strong impact on medical applications, including photodynamic therapy of cancer and dentistry. A synchrotron light source, developed in Campinas under the leadership of physicists, has been used not only for basic research but also for applications that have benefited Brazilian companies, from reducing the viscosity of oil and the development of new materials for the cable anchoring of oil platforms in deep water, to the control of citrus disease.

In addition to these specific examples, one should note that the outcomes from basic quantum physics, mentioned before, also play an important role in several sectors of activities in developing countries, which use semiconductors, lasers, magnetic resonance devices, GPS etc. Access to the newest technology would be easier, and money for imports and royalties could be saved, if these developing countries had a participation in the development of these devices.

For a student in the developing world who is interested in physics as a career, is it necessary to go overseas to study or to work?

Right now, many developing countries have high-level graduate schools, so it is not necessary in these countries to go overseas in order to get a PhD. It is important, however, to have the experience of working in other countries, either before the PhD or as a postdoc. Physics research is a universal endeavour, so international contacts and communication are an important part of it.

For those who do go overseas, would you advise them to return home, as you have done?

I would certainly advise them to return home, so as to reinforce the scientific capacity of their country. The impact of their work would be much bigger in their home country, the level of influence on the definition of scientific and educational policies much higher than what they could have in a developed country. There is much to build, there are big challenges, and they should be part of it. This does not hinder intensive contacts with the worldwide scientific community, made possible by several financing mechanisms, and necessary to keep up to date with the frontiers of research.