Every year, malaria kills about a million people worldwide, 90% of them in sub-Saharan Africa. Prize winner Muntaser Ibrahim studies the connection between malaria, human communities and genes. 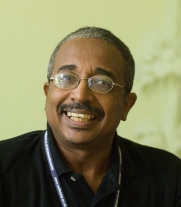 Molecular biologist Muntaser Ibrahim from Sudan is the 2014 winner of the prestigious CNR Rao Prize for Scientific Research. His genetics studies on malaria, cancer and other diseases could lead to the development of novel vaccines against major infectious diseases, and to a better understanding of basic mechanisms of cancer development.

TWAS – The World Academy of Sciences for the advancement of science in developing countries – awards the prize every year to reflect the innovative spirit and accomplishment of Indian chemist and former TWAS President CNR Rao.

Ibrahim is an expert on population genetics and has been honoured for his important contributions proving that individuals’ response to several diseases depends on their genetic endowment. The award cited Ibrahim "for his fundamental contribution to our understanding of the role of human genetic variation and population structure in disease susceptibility."

The winner was officially announced this morning during the Opening Ceremony of TWAS’s 25th General Meeting in Oman. Each year, the TWAS Meeting showcases the best scientific research from the south of the world, gathering illustrious scientists and talented researchers to strengthen scientific networks that can advance human prosperity and sustainable development worldwide.

This year’s event, from 26-29 September, is hosted by the Sultanate of Oman, with support from the Omani Ministry of Higher Education, The Research Council of Oman, and Sultan Qaboos University. TWAS President Bai Chunli, Omani Minister of Higher Education Rawiya Al Busaidi, and ministers and dignitaries from throughout the developing world were in the audience, along with more than 350 scientists from 56 countries.

Ibrahim is a professor at the Department of Molecular Biology, Institute of Endemic Diseases at the University of Khartoum in Khartoum, Sudan. There, he is trying to shed light on the obscure relationships that link diseases and human genetic diversity, with emphasis on malaria spreading in low-transmission areas.

Ibrahim holds a bachelor’s of science degree in zoology and chemistry and a PhD in molecular biology. Now a TWAS Fellow, he was a Wellcome Visiting Fellow in the Department of Pathology at the University of Cambridge (UK) and was a founder of the Sudanese Academy of Sciences. After establishing the Unit of Disease and Diversity at Khartoum University, in 1998, he began investigations on the genetic variations of humans and parasites, and how they correlate. Malaria and leishmaniasis are among his major targets.

Malaria is a global burden: every year it causes about one million deaths worldwide, 90% of them in sub-Saharan Africa. But it is also a complex disease as it involves three parties and the relation they establish: the malaria’s causative agent, a parasite called plasmodium; the mosquito anopheles, the vector that hosts and spreads the plasmodium; and humans, who are the final recipients that the parasite needs to infect through the mosquito’s bite in order to complete its life cycle.

Despite the effort to control malaria carried out by countries of Sub-Saharan Africa with support from the World Health Organization, Ibrahim’s country was still reporting one million cases in 2010. Not many if compared to 219 million malaria cases reported globally, but enough to give Ibrahim strong motivation for his research.

“What makes malaria so interesting is that ethnic differences correlate with different susceptibility to this disease, both at the immunological and the genetic levels,” he explained. In other words, people from different ethnic groups respond differently to the infection – some never develop the disease, while others do – because they have different genomic arrangements.

With an international team of colleagues within MalariaGen (a consortium of researchers from more than 20 countries interested in malaria), Ibrahim and his team participated in the genetic analysis of 15 ethnic groups across Africa, looking for gene variants that could explain different local susceptibility to this disease. In the study, they identified single mutations in two genes that code for proteins important for the adhesion of plasmodium to human red blood cells, where the parasite completes its life cycle.

These mutations, as it turned out, change the final shape of the protein that the plasmodium uses as a lock to penetrate the red blood cells. And they can be “protective”. Different populations show different rates of protective mutations in this DNA hot spot, and also different susceptibility to the infection.

But there’s more to this story. In another study carried out along the Rahad River basin in Eastern Sudan, the scientist analyzed how environmental conditions in non-irrigated and irrigated semi-arid areas as well as seasons, have an impact on malaria transmission. Seasonality, for example, affects the characteristics of a specific protein secreted by plasmodium that is currently used as a target to build a vaccine.

Along with medical and biological insights, Ibrahim’s research is also important from a historical point of view. By tracking how specific communities have evolved protective mechanisms against parasites, and how the parasites have co-evolved with humans, the scientist helps write a chapter in the book of ancient migrations across the Northeastern regions of Africa.

However, his work is not restricted to local infectious diseases. With a team of 15 to 20 young scientists, he has broadened his scientific interests to include cancer. “I am convinced that, in real life, there are no boundaries between one disease and another,” he said. “And the answers we are looking for sit in DNA.”

His research group is currently embarking on the study of possible interactions of common infections and tumour development at the molecular level including aspects of trade-off and shared gene networks. By completing the first genetic analysis of Sudanese breast cancer patients, Ibrahim showed that Epstein Barr virus (EBV) is the major agent  responsible for local breast tumours, as opposed to what happens in Europe where breast cancers are mainly due to specific mutations in genes called BRCA.

Asked to comment on the C.N.R. Rao Prize he said: “This prize is really important to me, because my contribution to the genetic profiling of disease susceptibility is receiving international acknowledgment, and from an illustrious academy such as TWAS.”

But Ibrahim has a dream: He hopes to establish a biorepository, technically a bio-bank, of human tissues and samples, for which he is currently applying for funds. Today Africa has only one such archive, established in South Africa and serving HIV/AIDS purposes.

“A well-established and comprehensive bio bank with at least one million samples will allow us to ask broader questions on many other diseases,” he said. It is a million samples and also a challenge of up to USD3 million that Ibrahim has in his future.

About the C.N.R. Rao Prize for Scientific Research

The CNR Rao Prize was established in 2006 by TWAS’s Founding Fellow and former president C.N.R. Rao, an eminent Indian chemist who currently serves as the head of the Scientific Advisory Council to the Prime Minister of India. The prize aims at acknowledging distinguished scientists from the world's scientifically lagging and Least Developed Countries who have made significant contributions to global science.

It carries a cash award of USD5,000 generously provided by Professor Rao. Each TWAS Regional Office presents one candidate from eligible countries of that region. TWAS officers review the nominations and propose a winner for approval by Prof. C.N.R. Rao.

TWAS Meeting:
TWAS 25th General Meeting
Tags:
CNR Rao Prize
malaria
epidemics
health
genetics
General Meeting 2014
Your subscription could not be saved. Please try again.
Your subscription has been successful. An e-mail with a link has been sent to confirm your subscription.
This website does not use profiling cookies, but only first and third party technical cookies, including cookies from social media plugins.
To learn more about our cookie policy or to change your cookie settings, click here.
By using this website and clicking “accept”, you consent to the use of cookies in accordance with our cookie policy.Accept