How can communities and nations cooperate to share fish and other ocean resources, while assuring that fisheries remain healthy? Policy experts and fishing community representatives explored these issues at a workshop in Mexico organized by the Environmental Defense Fund and TWAS

For centuries, the wealth of the seas has fed people and supported their communities. But as human populations increase, the pressure on fisheries is increasing – along with tensions relating to the governance and sustainability of fisheries. To examine these issues, TWAS and the Environmental Defense Fund (EDF) organized a workshop in Merida, Mexico that brought together scientists, government officials, fisheries representatives and others from six Latin American countries.

Today, fisheries directly support the livelihoods of some 34 million people worldwide. Among these, small-scale fisheries provide major contributions to nutrition and food security and poverty alleviation in many developing countries. 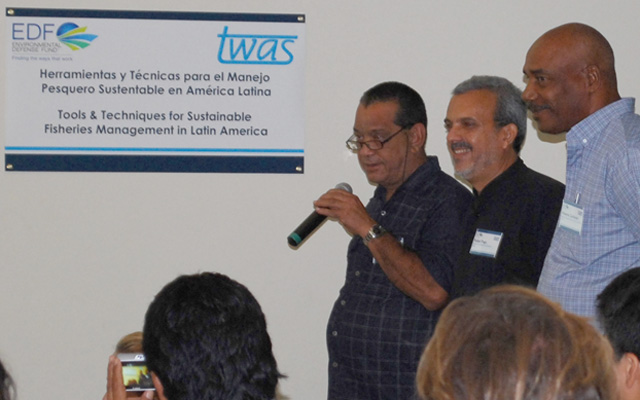 “By definition, small-scale fisheries tend to be low-cost, use low technology from small boats and operate near the shore, often for subsistence rather than for export,” explained Rod Fujita, director of Research and Development of EDF’s Oceans Program. Such fisheries also tend to be labour-intensive and, as they are often integrated with processing, they often provide many jobs for whole families.

However, artisanal fishing communities are often fragmented, each one working in isolation from others. This is despite the fact that they share many of the same challenges. For example, whereas good data are available regarding fish stocks for about 400 large-scale fisheries worldwide (including cod, tuna and sardines), small-scale fisheries tend to be poorly studied. At the same time, they often have heavy regulation imposed on them. Such issues, combined with the fact that many such fisheries cross national borders, made the topic of small-scale fisheries management a suitable subject for investigation and discussion under the TWAS Science Diplomacy programme.

For these reasons, the EDF-TWAS workshop, ‘Tools and Techniques for Sustainable Fisheries Management in Latin America’, held 27 September to 2 October, focused on two main themes: methods of assessing fish stocks and ecosystems when data is limited; and how to design effective rights-based management systems to help achieve sustainable and profitable fisheries.

Held in Merida, Mexico, on the sidelines of the second World Small-scale Fisheries Congress, the workshop brought together 18 participants – three each from Belize, Brazil, Chile, Cuba, Mexico and Peru, with each country team including a scientist, a government official and a representative of local fishery communities or an environmental  nongovernmental organization (NGO). They were joined by five masters and PhD students from the Latin America Fisheries Fellows (LAFF) programme of the Bren School of Environmental Science and Management at the University of California, Santa Barbara. In addition, nine experts from EDF offices in the United States and Mexico provided in-depth training, while the TWAS Science Diplomacy programme was represented by Peter McGrath and Sara Dalafi. 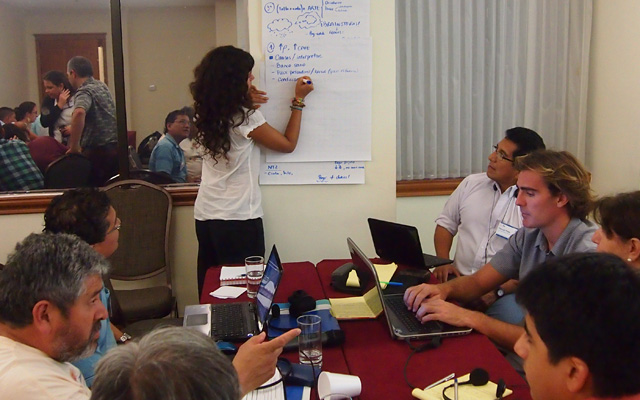 In his opening remarks, McGrath, coordinator of the TWAS Science Diplomacy programme, pointed out that some of the most difficult challenges at the interface between science and diplomacy revolve around issues that deal with shared resources, including the sea.

The workshop opened with an overview of the local situation in Yucatan, the Mexican state in which Merida is located. Jose Luis Carillo Galaz, president of the Federation of Cooperatives of Central and Eastern Yucatan, described the local fisheries, including lobster and octopus, as well as highlighting problems relating to the sea cucumber fishery in the area. The views of three other fisheries representatives – one from Chile and two from Cuba – provided additional insights into the challenges faced by those trying to earn a living from their local marine resources.

Many such challenges were similar between countries, said Alberto Carbonel, chief of fisheries operation, Empresa Pesquera Industrial de Santa Cruz del Sur, Cuba. There was often a lack of environmental awareness among fishers, as well as a lack of understanding of the role of science and research in the sustainable management of resources. In particular, he identified a weak link between scientific information and its application to production or catch limits.

Common economic challenges identified included the fact that, after processing and packing, the fishermen only receive a small proportion of the eventual price paid by consumers for their catch, and that artisanal fishers often lack social security and pension plans.

The power of incentives

A key scientific focus of the workshop was on the need for data. Indeed, the majority of fisheries worldwide – more than 10,000 – lack sufficient data to conduct industry-standard stock assessments and are thus at risk of over-fishing and collapse. But EDF has developed a valuable resource: FISHE, the Framework for Integrated and Habitat Evaluation, The website allows managers to assess their fishery, even if data is limited, and develop sustainable management solutions.

Another focus was on the value of having fishing communities share their total haul of fish. Catch-shares are agreements whereby either an area is divided into segments where particular fishermen can operate, or quotas are distributed that set maximum allowed catches. ‘Catch-share’ programmes are effective because they create a common interest in protecting the fishery from over-exploitation.

"As of 2013, about 200 catch-share programmes exist worldwide, managing more than 500 different species in 40 countries,” said Erica Cunningham, a research associate with EDF’s Catch Share Design Center. “The idea is similar to dividing a pie in that a catch-share programme allocates a secure area or privilege to harvest a share, or quota, of a fishery's total catch to an individual or group.”

“We have shown that these systems outperform conventional management systems across the board – benefiting both the environment and the fishermen and their families,” she added.

"Fishermen must be connected to the science so that they will accept the advice of the researchers," said Jake Kritzer, director of EDF’s Spatial and Ecosystem Initiatives. But, he added, "there is often also a need for national or regional governments to accept the scientific evidence and the tools used to collect it, especially as governments often have their own data collected by ministry scientists.”

The role of science diplomacy

The subject of science diplomacy was also highlighted as each country team was paired with another (Cuba with Mexico, Belize with Brazil and Chile with Peru) to simulate cross-border cooperation discussions and agreements between fisheries managers.

“Although these were simulated discussions, they were based on realistic scenarios,” explained McGrath. “For example, lobsters exploited by the fishermen in Yucatan belong to the same general population as the lobsters trapped off the coasts of Cuba and Florida. In addition, the El Niño climate variations of the Pacific Ocean affect the coasts of both Chile and Peru. Because of El Niño, quotas or catch limits set in the years between El Niño events can be totally inappropriate during the years of peak activity. Only by working together and pooling information and results can the coastal fisheries of these two countries be effectively managed.”

Nancy Barahona, a researcher at Chile's Instituto de Fomento Pesquero (Fisheries Development Institute), said she would share the knowledge she had acquired with her colleagues in a governmental programme that is developing monitoring procedures for small-scale fisheries. Members of the Comision de Manejo de la Pesqueria de Erizo (Commission on the Management of the Sea Urchin), to which Barahona also belongs, will also benefit from the knowledge she gained at the Merida workshop.

“To date we have worked primarily with the government, but now we are starting to work more with local communities,” said Andrea Moreno, fisheries specialist for the Nature Conservancy in Peru. “I therefore found the workshop particularly useful as I learned a variety of practical tools that I can use to work directly with fishermen.

“I also learned from other countries’ participants how the political system of the country can determine the management of fisheries,” she added. “In Cuba, for example, with its socialist system, there is a completely different system compared to Mexico, where there is a legal framework that is more favourable to the implementation of catch shares and the organization of fishermen in cooperatives.”

Alberto Carbonel noted that, once back in Cuba, he and the others from the Cuba team were not going directly home.

“We will go to a three-day meeting to share what we have learned from this workshop with representatives from the Cuban goverment, civil society and fishermen from the communities of Playa Florida and Guajabal,” he said.

McGrath said the five young scientists from the Latin America Fisheries Fellows (LAFF) programme "brought fresh new ideas" to the discussions. One of the characteristics of the LAFF programme is that students, once they graduate, must return to their home countries and work in a related area. Thus the five LAFF fellows will shortly return to Chile, Cuba and Mexico.

“Many of the solutions we presented during the course of the workshop are well-tested throughout the world,” said EDF's Rod Fujita. “We consider it our job at EDF now to scale them up. This workshop has been part of the first phase of that effort.”

Learn more about the TWAS-Environmental Defense Fund workshop, including the environmental, diplomatic and human challenges arising from a new global demand for sea cucumbers.

Tags:
fisheries
science diplomacy
Environmental Defense Fund
environment
oceans
2014
Peter McGrath
Mexico
Your subscription could not be saved. Please try again.
Your subscription has been successful. An e-mail with a link has been sent to confirm your subscription.
This website does not use profiling cookies, but only first and third party technical cookies, including cookies from social media plugins.
To learn more about our cookie policy or to change your cookie settings, click here.
By using this website and clicking “accept”, you consent to the use of cookies in accordance with our cookie policy.Accept