Singh made his remarks during his opening address at the TWAS 21st General Meeting. The meeting is taking place in Hyderabad. More than 400 scientists from 40 countries are attending.

Singh noted that his friendship with Abdus Salam, TWAS's founding president, helped to shape his early perceptions of the relationship between science, technology and development.

"I knew Salam in the 1950s, when I was a student at St. John's College in Cambridge." The two later worked together on the report of the South Commission, The Challenge to the South. The report made a strong case for self-reliant, people-centered development and also called for South-South cooperation to facilitate growth. 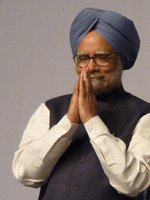 "Salam had great faith in the potential of scientists in the developing world and also great faith in scientific purpose in advancing human civilization as a whole," Singh noted.

The Prime Minister also praised Salam for "showing the developing world the path to scientific cooperation."

He observed that cooperation in science is as important as ever. "Developing countries share many of the same challenges" – whether it is combating tropical diseases or transforming traditional agriculture.

Problems of underdevelopment, he noted, do not receive adequate attention in industrialized countries. "Nor," he added, "should we expect others to solve our problems."

That is why the Minister lauded the rapid growth of scientific capacity in the South. Until recently, he observed, science and technology "was the preserve of the developed world". But "the barriers to the development and diffusion of science and knowledge are breaking down."

The need for alternative strategies for growth, the Minister noted, makes South-South cooperation crucial to the future well-being of developing countries.

Despite the advances in scientific capacity that have been made, developing countries often lack a critical mass of scientific personnel and remain handicapped by poor scientific facilities.

But problems that cannot be solved individually, the Minister said, could possibly be solved by working together. TWAS, the Minister observed, can play a vital role in this effort "by providing a space where scientific collaboration on critical issues can be facilitated."

TWAS Meeting:
TWAS 21st General Meeting
Tags:
Hyderabad
science capacity
Abdus Salam
South-South
science-based development
news_item
meeting
M. Singh
Your subscription could not be saved. Please try again.
Your subscription has been successful. An e-mail with a link has been sent to confirm your subscription.
This website does not use profiling cookies, but only first and third party technical cookies, including cookies from social media plugins.
To learn more about our cookie policy or to change your cookie settings, click here.
By using this website and clicking “accept”, you consent to the use of cookies in accordance with our cookie policy.Accept