Developing countries are increasingly interested in space, but they also need to feed their people and improve health care. Are these goals in conflict? Three high-level experts see space science as vital for on-the-ground progress – and even for peace. 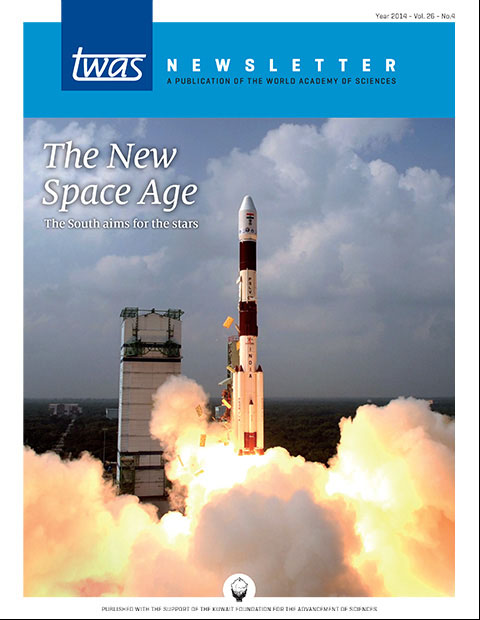 The “space race” of decades past has evolved into a busy “space era”, with dozens of nations opening agencies and deploying rockets and satellites. Missions to Mars and the Moon get headlines, but today much of the activity is focused on Earth-observation, early warning of natural disasters and improved communication.

And yet, in many discussions about space science and technology for developing nations, there’s an undercurrent of doubt. Should they invest in space programmes if that diverts resources from compelling needs such as education, health, and economic development?

Space research has long been carried out mainly by the United States, Russia (and the former Soviet Union) and Europe. Now, some developing countries are nurturing their own ambitions. Do developing countries really need space programmes in light of the other challenges they face?

Ogallo: Space science has been effectively used in developed countries to improve and advance almost all socio-economic sectors including aviation, transportation, communication, water management, urbanization and others. Investment in peaceful uses of space science and technology in support of progress in developing countries must be an integral component of long-term national development.

Mendieta: Space enables tackling societal needs such as the digital divide with communication satellites, agriculture, natural resources, fisheries and environmental issues with Earth monitoring satellites, as well as different types of security (internal, alimentary, sanitary, environmental). In addition, the space industry provides jobs in quality and quantity: as an extension of the aerospace sector, more developing counties are entering the space sector both with foreign direct investment and with local supplychain small and medium enterprises.

Wu: Space programmes are not the first priority for developing countries. Economic development and solving fundamental social problems are much more demanding for the governments. However, for large developing countries such as China, India and Brazil, space programmes can be a useful tool to help development. Satellite communication and broadcasting can bring modern world information to the rural areas; satellite remote-sensing can give updated information of landuse and disaster monitoring. Taking into account other benefits, such as the political effect and their service also to the national defence, it is not that expensive to have an independent space programme.

Is there a model of “space science for the South” that is different when compared to the US or the Soviet Union 50 years ago?

Mendieta: Building scientific and technical capacities is a general goal among developing countries. There must be a careful reflection on balancing the government budget for space systems and services to attend their societal needs and the budget to participate in space exploration in cooperation with developed countries. Nowadays, we are encountering a different and evolving economic scenario in the space sector, hence developing countries can take advantage of the best practices of developed countries and “jump” directly onto new schemes to foster their space sector. Finally, “space science for the South” can really be a new opportunity, since many developing countries have specificities that can require particular space solutions, for example tropical orbits.

Wu: At the beginning of the space age, in the 1960s, there was a space race between the Soviet Union and the US. The political purposes were much more important than science and benefits for human beings. Even now, some of the space exploration programmes are still aiming at gaining political power and influence. Developing countries have shortcuts to develop their own programmes: they could start space programmes from micro satellites or even cube-satellites. Once a satellite is in space and operating, the effect on the public is also huge and the government’s investment can get support from the general public very easily.

Ogallo: Effective space science applications in developing countries require enhanced capacity building, education, and regional investments in basic infrastructure and research. Developing countries should adopt systems that take advantage of what is available and planned, but also include scenarios that will allow them to escape being disadvantaged in future.

What kind of return on investment (ROI) could developing countries have from investments in space research?

Wu: The ROI comes from several aspects. First of all, from engineering education. Building a spacecraft requires knowledge from many disciplines such as mathematics, physics, mechanics, chemistry, electrical engineering and optical engineering. Secondly, if a satellite can carry an application payload, such as a transponder or a camera, it will bring solid return on applications in communication, remote sensing and other fields. Finally, there is certainly a political return from the successful space mission.

Ogallo: To calculate ROI one has to be able to assess investment benefits data and assess against the cost of investment, which is sometimes very hard to do. The kind of ROI that could be adopted by developing countries will not only be thematic, but also regional specific. These will require a framework for their standardization to enable to make some comparison across various sectors, countries and regions.

Mendieta: Several developing countries are already benefitting from the ROI in the aeronautical field: Mexico has been witnessing a sustained growth in this sector, both in manufacturing and also in R&D activities. The space field can be thought as a natural prolongation of the aeronautical world, but nowadays another sector is decidedly contributing: information technology and communications, for example in the expanding global navigation satellite system applications. As in the aeronautical field, Mexico is starting to attract space companies to make alliances and even establish some facilities in the country; the Mexican Space Agency is working to get training, technology transfer and, in the mid-term, production transfer. The ROI will be in high-level job creation, export figures, regional development and technology balance.

Could space science be used to promote cooperation among nations and be a basis for science diplomacy in developing countries?

Ogallo: Space-based science and technologies have provided tools and systems for many applications including support to global, regional and national security monitoring and early warning. That has contributed immensely to intelligence information gathering and other applications that continue to improve global and regional peace agendas.

Mendieta: The space research is an ideal scenario for cooperation among countries: the International Space Station is the iconic example, and future large-dimension missions, both robotic and human spaceflight, will definitively rely on international cooperation. Developing countries must find ways to enter this cooperation scenario, starting even with modest participation and enhancing their involvement in an adaptive way.

Wu: Yes. The objective of space science programmes is to discover, avoiding duplications since the discovery can be claimed only once. Therefore cooperation in space science is fundamental. There is an international organization, called the Committee on Space Research – COSPAR – whose mission is to promote international cooperation in space research. Many research institutes from developing countries are members of COSPAR.

Should developed countries be partners in assisting developing nations to increase their own capacity building in space science?

Mendieta: I believe that a winwin scenario can be reached with cooperation between developed and developing countries as it has been, for example, in the Mexican aeronautical sector. By establishing in Mexico, companies have developed their supply-chain network, not only because of the geopolitical location of Mexico or the low-wage workmanship, but because of the growing production of high-level technicians and engineers, as well as applied research centres that can provide high-level local R&D capabilities.

Wu: I am sure that developed countries are happy to assist developing countries in building their own space programmes, particularly in space science. The reason is that nobody would like to repeat what others have already done. Therefore, helping each other and focusing on key scientific unknowns are primary goals of all scientific communities. In COSPAR, there is a capacity building programme to help the developing countries participate in space research programmes.