Researchers to give TWAS medal lectures

Three distinguished researchers have been selected to give the TWAS Medal Lectures on their research next year at the Academy’s annual General Meeting. The lectures are one the organization’s highest honours, featuring some of the most prominent work by elected TWAS members. 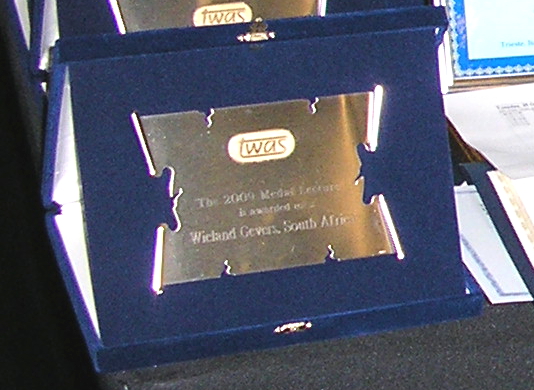 The TWAS Council at this year’s TWAS General Meeting in Buenos Aires chose Berhane Asfaw of Ethiopia, Chen Sai-Juan of China and Jane Lubchenco of the United States as the honourees for 2014.

Asfaw (left) is the director of the Rift Valley Research Service and a highly regarded scholar in African palaeo-anthropology. He has made key contributions to the discovery and analysis of evidence spanning the last 10 million years of human evolution, and has been involved in the discovery, recovery, analysis, description, dating and naming of numerous fossil species tied to human evolution, including Chororapithecus,Ardipithecus, Australopithecus garhi, and Homo sapiens idaltu. He was elected a TWAS fellow in 2010.

Chen (centre) is a geneticist, the dean of National Key Laboratory of Medical Genetics, and executive director and researcher of Shanghai Institute of Hematology at Shanghai Jiao Tong University in China. She specializes in molecular genetics and the genetics of cell structure, and her work has led to research on treatments for leukaemia and tumour surgery. Among other awards, she has been named one of the Top Ten Women Elites of China, and was elected a TWAS fellow in 2007.

Lubchenco (right) is a pioneer in the environmental sciences who has discovered fundamental ecological and evolutionary relationships among animals and plants in coastal systems. She is a former undersecretary of commerce and administrator of the US National Oceanic and Atmospheric Association, providing enormous expertise in oceans, climate change and interactions between the environment and human lifestyles. She was elected an associate TWAS fellow in 2004.