Thirty-two European countries and 320 cities took part in the annual edition of the Researchers' Night an annual Europe-wide event that aims at bridging the gap between science & technology and citizens. For the third consecutive year, Trieste's scientific community was in the limelight. So too was TWAS, which took part in the initiative for the first time. 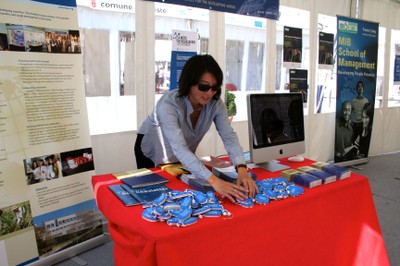 TWAS's booth, located just in front of the Trieste's city hall, was where the academy's staff conducted conversations with citizens and spoke about the activities that have gained the Academy a worldwide reputation for helping to promote scientific capacity in the developing world. A brief video, introducing a number of TWAS's most eminent members, was also shown.

TWAS's recently appointed executive director Romain Murenzi spent time at the booth to speak with the public. In the morning, the visitors consisted largely of students from secondary school. In the afternoon, local authorities, including Roberto Cosolini, the Mayor of Trieste; Antonella Grim, the city councillor for education; Francesco Peroni, the Rector of the University of Trieste; and Maria Teresa Bassa Poropat, president of the Provincia di Trieste were among the dignataries in attendance.

"Researchers' Night", Murenzi says, "provided a wonderful opportunity for me to introduce myself to the citizens of Trieste and to talk about TWAS. It also allowed me to learn more about Trieste, 'The City of Science'. Trieste has earned a well-deserved global reputation for the contributions it has made to help scientists in developing countries. It was great to hear about the work of the city's university and research centres that have made this happen."

Murenzi also participated in one of the night's most popular events: 'Street Science'. There he engaged in an informal conversation focusing on a meaningful event from his past. Not surprisingly, he spoke about the economic and scientific renaissance in Rwanda following the violence and genocide of the 1990s.

Serving as minister of education and scientific research in the aftermath of this tragedy, Murenzi noted he "tried to build and strengthen education at all levels". Thanks largely to government efforts, the number of students in higher education in Rwanda rose from 1,000 in 1994 to more than 25,000 in 2005; nearly 40% of the students are now female. At present, Rwanda also invests 1.6% of its gross domestic product in science and technology, a figure that is expected to rise even higher over the next five years.

Between 1996 and 2005, Rwanda registered an annual economic growth rate of about 8%. Since 2006, the government, in collaboration with the World Bank, has set up a broad-based programme aimed at strengthening local capacity-building for the purposes of promoting sustainable economic growth.

"The same principles that shaped my tenure as minister – a unshakable belief in the power of science to change lives, improve society and grow the economy – will also shape my tenure at TWAS," Murenzi said. "I hope to build upon the Academy's strong foundation in scientific capacity-building to allow the benefits of science, technology and development to reach an increasing number of countries in the developing world. The success of the Academy, I believe, is Trieste's success as well. The Academy is grateful for the city's generosity, which has helped to make the world a better place."