The right tools for better research 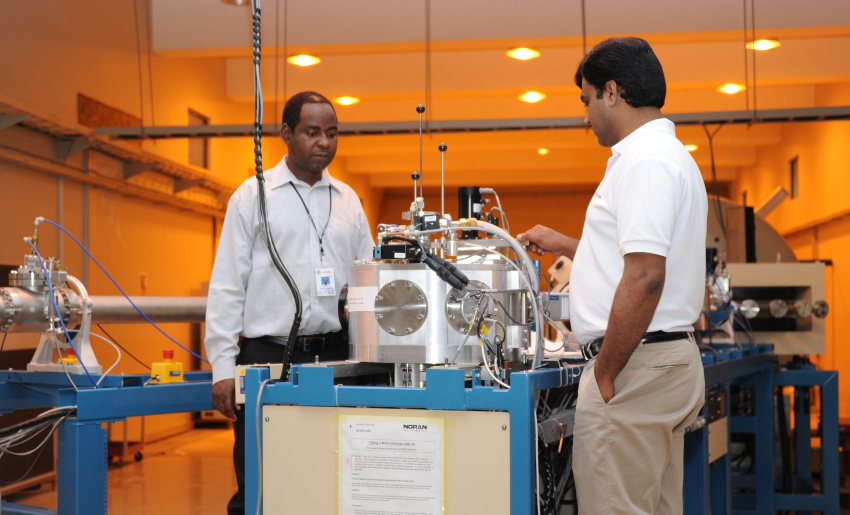 Modern-day technology depends on electronic parts that are so small that the machines that make them are hard to come by, especially in developing countries with tight resources. But through fellowships that allow scientists from two different countries to share their laboratories and expertise, a growing number of scientists are getting access to such scientific tools and the training it takes to use them.

Experimental physicist Morgan Madhuku of Zimbabwe works on alloys obtained by combining either aluminum, gallium or indium with nitrogen. These alloys are also semiconductors, and are extremely thin, sometimes less than a nanometre. Ion beams – small, straight streams of electrically charged particles – can alter these semiconductors into ideal building blocks for devices such as light-emitting diodes, which are useful for modern lamps.

Madhuku first left Zimbabwe for South Africa in 2000, where he earned his master's degree in physics at the University of Fort Hare in 2001. He went back there in 2004 and earned a PhD at the University of the Witwatersrand in Johannesburg in 2008. Since then, he has been working as a research scientist at iThemba LABS and is now a permanent resident of South Africa.

In 2013, he took advantage of TWAS’s postdoctoral fellowship with the National Centre for Physics (NCP) in Islamabad, Pakistan, as its first-ever recipient.

TWAS’s postdoctoral fellowships provide opportunities to scientists from developing countries who recently have earned their PhD. Each postdoctoral fellowship lasts six months to three years and can host recipients in Brazil, India, Iran, Kenya, Malaysia, Mexico, Pakistan or Thailand. While there, postdocs gain invaluable experience working with prominent scientists in a developing country other than their own. Host institutions cover all in-country costs such as tuition fees and living expenses, while TWAS administers the programme and covers travel costs.

Madhuku's fellowship gave him a chance to work at NCP, which has state-of-the-art equipment he needed to learn to use, including a tandem accelerator that fires ion beams. How does the ion beam work? Crystalline materials have a consistent molecular pattern that ion beams can disrupt in useful ways, Madhuku said. Ion beams can rip an atom from the pattern, leaving a conspicuous vacancy behind. They can warp the pattern, creating a string of dislocated atoms in strange places. They can even create zones where two different crystalline patterns come together.

This makes ion beams a very precise, useful tool for fine-tuning matter on a molecular scale. For example, Madhuku said, scientists can attach a semiconductor with an abundance of electrons to another semiconductor with holes that need to be filled by electrons. The boundary between these semiconductors is called a p-n junction, and these junctions are at the heart of nearly all semiconductor-based electronics. When electricity flows across this junction, electrons from one side flow into the holes on the other side, and the junction gives off light. The colour of that light depends on what materials make up the semiconductors on either side, and if that colour is visible to human beings, the light-emitting diode can be used to make a new LED lamp.

Madhuku said he was impressed by the sophistication of the Pakistani lab, especially considering that media reports of terror attacks initially made him nervous about the move. One African company even refused to give him life insurance while he was there. But in the end, his trip was both safe and extremely beneficial to his career. “I was very impressed by the state-of-art Tandem Accelerator facility and the dedicated team of scientists and technical staff who were always ready to assist me during the visit,” he said.

He also had access to Rutherford backscattering spectrometry, which scatters ions and then tracks how they bounce to analyze surfaces on a very small scale. Madhuku said he plans to continue his work at iThemba LABS in South Africa.

“It was a tremendous honour to be the first recipient of the NCP-TWAS Postdoctoral Fellowship and I am extremely grateful to TWAS for this award,” he said. “It provided the much-needed boost to my research capabilities in ion beam analysis of materials.”

Tags:
zimbabwe
Pakistan
Experimental physics
physics
equipment
fellowships
TWAS fellowships
postdocs
Your subscription could not be saved. Please try again.
Your subscription has been successful. An e-mail with a link has been sent to confirm your subscription.
This website does not use profiling cookies, but only first and third party technical cookies, including cookies from social media plugins.
To learn more about our cookie policy or to change your cookie settings, click here.
By using this website and clicking “accept”, you consent to the use of cookies in accordance with our cookie policy.Accept