Science and women in Turkey

"Women in academia in Turkey are not suffering," says Cigdem Kagitcibasi, a professor in the College of Arts and Sciences at Koc University.

"There is little discrimination against women professors, especially in science. They enjoy equal standing with men in securing teaching and research positions and can count on earning promotions for their accomplishments."

She adds, however, that "gaining high-level administrative and managerial positions is another matter. At certain level of leadership, the spectre of discrimination remains."

Kagitcibasi discussed the status of women in academia in Turkey with TWAS editor Daniel Schaffer at the Academy's 21st General Meeting in Hyderabad, India.

Kagitcibasi attributes the high status of women academics in Turkey to the country's unique history. Before the creation of the republic in 1933, she notes, "90% of all women in Turkey were illiterate compared to 70% of the men." Responding to the crisis, the new government launched an aggressive educational reform programme to rapidly increase literacy among the population, including women.

However, the government's limited resources largely confined the programme to the cities, where it was possible to reach more women at a lower cost.

The results of this effort were twofold: first, literacy rates among urban women increased significantly and, second, a disturbing gap emerged between well-educated, professional women in cities and poorly educated women in rural areas – or, as Kagitcibasi describes it, between "women who worked outside the home and women who worked at home". 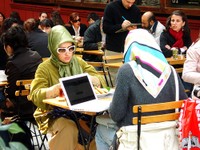 Today, women in Turkey have a large presence in a number of professional fields. In science, she notes, women have enjoyed particular success in such disciplines as biology, chemistry and engineering. "More than 50% of all doctors in Turkey," she says, "are women."

Despite the progress that women have made, Kagitcibasi notes, "25% of all women in rural areas are illiterate compared to about 10% in urban areas".

The key to future progress, she says, "lies in expanding access to professional education for women." Many women in rural areas do not attend school beyond the eight years of compulsory education required by the government. "That will have to change," says Kagitcibasi, "if the literacy and education gap between urban and rural women is to close in the years ahead."