Science definitely is not boring

Diego Golombek, one of Latin America's most influential science communicators has a message for researchers everywhere: abandon jargon, embrace enthusiasm – and please, no more potted plants 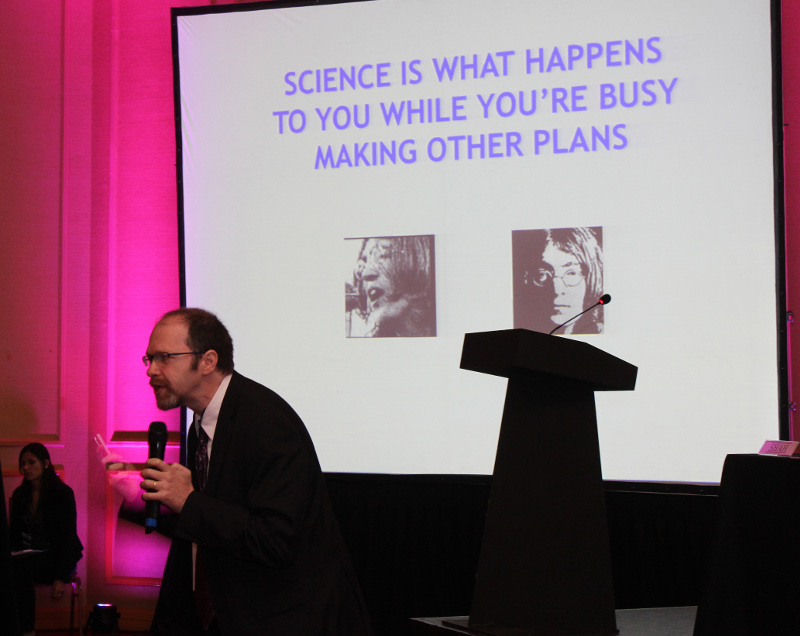 When Diego Golombek thinks about contemporary science communication, he thinks about Napoleon’s invasion of Russia in 1812 – and his epic defeat on the frigid Russian plains.

Napoleon had assembled an extraordinary multi-national army, 600,000 men in all, and marched east with the hope of conquering the Russian empire. But the French commander was surprised at what he found: a vast emptiness. The Russians had pulled away from his army, yielding the countryside but luring the invading troops into a wintry trap. The rest, of course, is history.

“That’s the way we try to communicate science”, Golombek said during a recent interview at the 2013 TWAS General Meeting in Buenos Aires. “We gather the most fabulous army that humankind has invented, this very powerful scientific thinking, and we go out with our torch of knowledge – and nobody is there.”

In a presentation at the TWAS meeting, Golombek told the audience that science is inherently interesting, even exciting, and there’s enormous public interest. But it’s up to scientists to understand what interests different audiences and to tell the story with verve and flair. That means good writing, good images, film and music, even fiction. It means sharing a view of the hard work, excitement and even the humour of discovery.

Golombek, a neuroscientist and high-profile science communicator, was one of five scientists in the developing world to be awarded a TWAS 2013 Regional Prize in the field of popularization of science. Because the TWAS General Meeting was held in his home country, he was invited to give an address on the closing day of the conference.

The talk was wide-ranging, sometimes provocative, and always engaging. To illustrate his message about the value and techniques of effective science communication, he cited not only Napoleon, but rock-and-roll legend John Lennon; 19th century writer Edgar Allen Poe and 21st century modernist Michel Houellebecq; and C.P. Snow, whose own work straddled the worlds of art and science.

Golombek’s career started early. By the age of 15, he was writing about sports and culture for a Buenos Aires newspaper. As his studies advanced, he gravitated toward science.

“I have no idea why”, he said in an interview. “It didn’t go very well when I first started. But then something happened and I started loving it. Probably when I started learning about the brain. And then I got the opportunity of putting those two worlds together – the worlds of communication and science – and that was the best.”

Today, Golombek is a professor at National University of Quilmes and a researcher at Argentina’s national research council, Consejo Nacional de Investigaciones Científicas y Técnicas (CONICET). He heads the chronobiology lab at Quilmes, and continues research into circadian rhythms. But his high public profile has come from advancing popular science in books and on television shows.

In his presentation at the TWAS General Meeting, Golombek stressed that researchers have a responsibility to communicate science because communication advances science – and because public funds often pay for their research.

He acknowledged that science can be difficult to communicate. While the material can be complex and technical, news coverage tends to simplify and usually doesn’t allow for historical context. Plus, research advances often don’t relate directly to the daily experience of the audience.

Certainly some scientists communicate well. But there’s a risk: If they do it too well, like the iconic scientist-writer-TV personality Carl Sagan, they can be dismissed by the science community as insufficiently serious. On this point, his critique of conventional science culture is unsparing.

Science could communicate – it could inspire – by using more creativity to connect with a broad audience. Unfortunately, “we tend to forget about those possibilities because... science is solemnerious”, Golombek says. “But that’s not true. People will not read something that’s written in jargon, or when it’s not written in a literary way. When we do it well, the audience is there.

“If you go into a lab, it’s really a vivid place. People laugh and tell jokes and listen to music and work a lot, and they are often very enthusiastic. Why, when we communicate science, can we not communicate that enthusiasm?

Could it be that many scientists secretly enjoy being difficult? He ticks off a quick list of jargon words and phrases: ‘connectome’, ‘proteomic’ and others. “We love to talk when nobody understands us. It makes us feel important. But that’s wrong – it’s not the way to communicate with our audience.”

Golombek sees one sector of the audience as particularly important, but often overlooked – youths aged 12 to 15. Research suggests that those are the years when many young people decide on a career in research or technology. To reach them, and to reach many audiences, it may be more effective to talk about the science of everyday life – the science of sport and romance, for example, of cars and computers. Once they’re interested, they may be more willing to learn abstract chemistry.

Among established scientists, the reaction to Golombek’s message is mixed, though he says that younger scientists tend to be more open to these ideas. And with increasing frequency, he said, science journalism is more open to new ideas, too. Science coverage in Latin America is more sophisticated than ever; there’s better education and training available for science journalists, and more outlets for their work. Argentina recently debuted Latin America’s first television station devoted to science.

Which reminds Golombek of an anecdote. Albert Einstein visited Argentina in 1925, at the invitation of a newspaper. “The guy who accompanied Einstein was the paper’s sports journalist”, he says. “Of course – because the newspaper assumed that nobody would understand Einstein anyway. But today that wouldn’t happen. You would have a professional science journalist.”