A global rush on sea cucumbers has created environmental risk, social conflict and even deaths in Mexico. At a workshop co-organized by TWAS, participants explored how good policy and effective science diplomacy could restore peace. 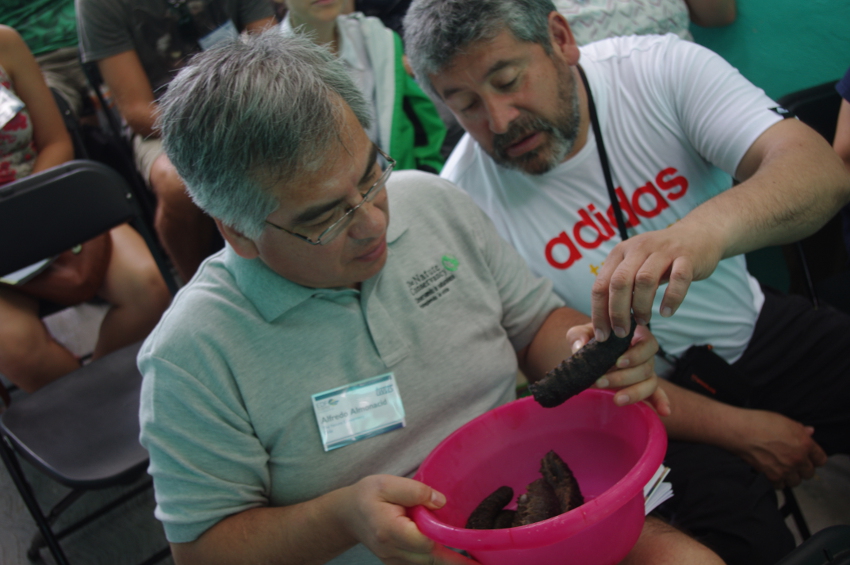 Sea cucumbers are a delicacy in some cuisines and are especially popular in China. In many other cultures, however, they are a marine resource that has been left untouched – local preferences being for more traditional sea foods such as fin fish, shellfish, octopus, prawn and lobsters. Small-scale fishermen around much of the world, therefore, have ignored their local sea cucumbers, largely because of the lack of any market for them.

All this is changing, however, as participants at an Environmental Defense Fund (EDF)-TWAS workshop held in Merida, Mexico, learned during a field visit to Progreso, a fishing port in the Yucatan Peninsula some 30 km north of Merida, on the Gulf of Mexico. A rush on sea cucumbers, driven by enormous demand in China, has led to environmental risk, legal chaos, social conflict, and even death. And it has created an important opening for research and for science diplomacy to help produce constructive solutions.

The workshop, “Tools and Techniques for Sustainable Fisheries Management in Latin America”, was held 27 September - 2 October and organized under the auspices of the TWAS Science Diplomacy programme. It was attended by three-person teams from six Latin American countries (Belize, Brazil, Chile, Cuba, Mexico and Peru), with each team comprising a scientist, a government official and a representative from either the small-scale fisheries community or an environmental non-governmental organization. Thanks to the presence of nine EDF experts, the workshop itself provided training in small-scale fisheries management from both the scientific and governance perspectives, while the presence of government representatives from each participating country ensured that discussions took place on shared marine resources – including comparing and contrasting the current state of each national sea cucumber fishing industry.

“The increase in sea cucumber fishing in Yucatan came when Chinese buyers came over and started offering to buy them,” explained Jose Luis Carillo Galaz, president of the Federation of the Cooperatives of Central and Eastern Yucatan. “At the beginning, around 2000, in the complete absence of any regulatory and monitoring system, sea cucumbers could be harvested easily and a single person operating in shallow water could fill a boat with one tonne in about 3 hours.”

To put this into perspective, in 2000, a fisherman taking a typical catch of 20 kg lobsters in a day would earn about USD150. In contrast, those focusing on sea cucumbers could harvest up to 500 kg and earn double that amount each day.

The problem was that such a harvest was not sustainable, and also that the lucrative returns attracted a lot of interest from people who were not fishermen and not connected to the local cooperatives and their marketing plans.

“To catch octopus or lobster,” explained Carillo, “you need the right equipment and to know how to use it. To catch sea cucumbers, you just need to know how to pick things up.”

This led to an influx of illegal fishermen coming to Yucatan from other parts of Mexico; they fished without permits, creating conflict between the local, legal fishermen and others who worked outside the regulations. “In addition, some fishermen and intermediaries were detained by the police, creating a sense of social chaos,” adds Carillo.

This ‘gold-rush’ for sea cucumbers has had other effects, too. For example, as populations have been decimated, fishermen need to dive deeper and deeper in search of their quarry. Deep diving without suitable decompression times can lead to ‘the bends’ – a painful (and potentially fatal) condition caused by nitrogen bubbles forming in the blood.

“Recently, the Health Department of the State of Yucatan reported some 400 such cases in just one year,” said Carillo. In fact, 30 of these untrained divers have actually died, confirming the risks that people are willing to take in order to provide the buyers with more and more product.

And all the time the scientists were playing catch-up. There was little or no data available on what sort of harvesting rate could be sustained by the sea cucumber population, even though it was estimated to be one of the largest in the world. Although early reports from local scientists suggested that a take-rate of 20% would be sustainable, local authorities imposed the more conservative rate of 5%, in line with the United Nations Food and Agriculture Organization (FAO)’s recommendations based on global estimations rather than local conditions.

To obtain more precise fishing limits requires scientific data obtained over several seasons. In Mexico, when a new fishery opens up, the government can release permits for ‘scientific fishing’, working with a few fishermen to collect the data they require to measure local population dynamics.

“This was implemented in 2000 for our sea cucumber fishery,” said Carillo. “The problem was that it took so long – 12 years – before the scientists came up with their recommendations.” In the meantime, all sea cucumber fishing in the area was essentially illegal.

A similar situation in the Galapagos Islands made the headlines in the mid 1990s and in 2000, explained Rod Fujita, director of Research and Development of EDF’s Oceans Program. “When the market opened up there, many people migrated from mainland Ecuador to cash in on the export market, leading to clashes between the new-comers, the local fishermen and the government. It even resulted in a government office building being burned to the ground.”

And, over the past 10 years, sea cucumber fisheries in countries such as Papua New Guinea, the Solomon Islands and Vanuatu have been completely closed in attempts to protect stocks from overfishing.

In Belize, the situation is somewhat different.

“The Chinese buyers came into Belize in about 2009,” confirmed Fernando Esquivel, Belize Fisheries Department. “Before that there was just some low-level sea cucumber fishing for Chinese stores and restaurants in Belize.”

“We have come to this workshop to learn better techniques on how to develop such quotas and, after the meeting, we hope to come up with a robust system for Belize,” he added. “It has also been interesting to hear the case of Yucatan. Certainly, if we do not do anything now while our market in Belize is still developing, then we may face the same challenges as in Progreso. This is something we would obviously like to avoid.”

In fact, while Belize has a six-month ‘open season’ for sea cucumber fishing, Yucatan fishermen are restricted to a 20-day period each May.

In both cases, however, illegal fishing continues to be a challenge.

“The situation is common for many of the countries represented here at the workshop,” says Esquivel. “There is a lack of resources for monitoring and enforcement.”

Enforcement is evident in Yucatan, though, and currently 150 cases of illegal fishing are being investigated. In fact, even during the course of the EDF-TWAS workshop, six people were arrested for illegally fishing for sea cucumbers and their catch sequestered – it is currently being held in Progreso at the headquarters of the Federation of Cooperatives of Central and Eastern Yucatan.

Despite the complexities of the scientific research and the interactions between different stakeholders in each fishery, the case study of the expansion of sea cucumber fishing confirms one thing: Although artisanal fishermen may have limited power in their local governance systems, they are still connected to – and somewhat at the mercy of – global supply and demand issues. Countries need to work together more closely to resolve such issues. By bringing together representatives from six countries, it was a major goal of the EDF-TWAS science diplomacy workshop to enable participants to work towards such practices – by sharing their experiences and learning about the situations in other countries – as they work towards ensuring the long-term sustainability of their local fisheries.