A new documentary film from TWAS explores how recent violence in Syria, Yemen and Iraq has threatened the lives of four researchers, forcing them to suspend their work and flee their homelands. 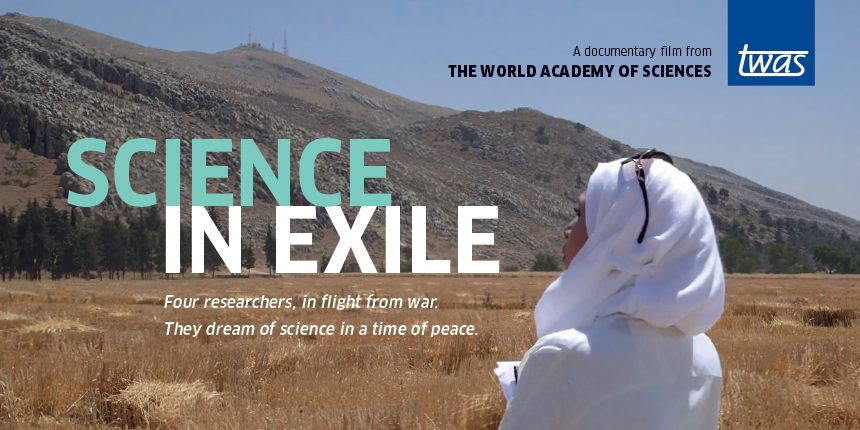 They are scientists in developing countries, committed to a life of research. Working in a wide range of fields, they are pursuing discoveries and innovations that will improve life for the people in their countries and their regions. But then comes a conflict, a war. Universities are bombed. Colleagues are killed. And the thousands of scientists who remain – what should they do? where should they go?

These scientists are the focus of "Science in Exile", a new documentary directed by Italian filmmaker Nicole Leghissa and produced by The World Academy of Sciences (TWAS), based in Trieste, Italy. The film explores how recent conflict in Syria, Yemen, and Iraq has threatened the lives of four researchers – two women and two men –  forcing them to suspend their work and flee their homelands.

"Science in Exile" is story of science, but also a deeply human story. It takes viewers into the lives of scientists and social scientists with years of training and experience who are struggling to find a place in new lands—a safe place where they can continue their research.  It also features organisations in the Middle East, Europe and globally who are working to support scientists displaced by conflict.

"Researchers from developing countries are the fundamental focus of The World Academy of Sciences," said TWAS Executive Director Romain Murenzi. "These scientists are so important to the development of their home countries, and when they are forced to flee, this is deeply damaging. 'Science in Exile' shows why the global scientific community must support them until they can return home in a time of peace."

"I spent a long time looking for the right protagonists for the film," Leghissa said. "I established with them a very personal relationship. We became friends and they opened to me the doors of their lives – their  thoughts, fears and hopes. They did it because they trusted me and because they thought that this film could be useful to support other scientists like them."

"Science in Exile" (37 minutes; 2017) was produced with a generous contribution from the Swedish International Development Cooperation Agency. It will have its North American premiere this week with two screenings:

"Science in Exile" also will be featured at the 2018 Institute of International Education-Scholar Rescue Fund Forum, "Protecting Scholarship and Promoting Partnerships". The Forum will be held Friday 9 March in New York City. (Learn more.)

Since the early part of this century, and especially in the past five years, millions of refugees have fled from grave instability and war in Afghanistan, Iraq, Libya, Yemen and other areas of the Southern Mediterranean/Arab region. In Syria alone, civil conflict has displaced some 11 million people; more than 1 million of them have requested asylum in Europe. In news coverage, they are often portrayed in negative terms, and as they arrive in their new countries, they are often met with opposition, hostility and xenophobia.

But a key dimension of this human disaster has been all but invisible: A small but important number of these migrants are scientists, engineers and technicians, advanced students or others whose work is related to scientific fields.

As this historic migration unfolded, TWAS began to hear troubling stories from scientists in the region – laboratories damaged, universities closed, colleagues disappeared or killed. These stories often came from scientists who had participated in programmes offered by TWAS and its partner, the Organization for Women in Science in the Developing World.

Saja Taha Al Zoubi is a Syrian social scientist and former TWAS research fellow who is featured in the film. "In Syria I became well-known in my field," Al Zoubi explains. "The research area of equity – and gender equity in particular – is interpreted as having political or ideological motives, which is very dangerous. If you stand by the government, you will be the object of the opposition, and if you show sympathy for the opposition, you will be targeted by the other side."

For more than a year, Al Zoubi lived an uncertain life in Lebanon's Beqaa Valley: Her work focused on the makeshift camps that shelter thousands of displaced Syrian agricultural families, many headed by women. At the same time, she faced continual risk that her visa would not be renewed, and that she would be forced to return to the dangers of Syria.

Now Al Zoubi has received life-changing news: She has won a research fellowship from the UK-based Council for At-Risk Academics (CARA), and will continue her work at Oxford University. She arrived in late January.

In addition to Kehoe and Al Zoubi, the film features:

"Science in Exile" was planned and filmed over a period one year in 2017 and 2018. Leghissa, an Italian, traveled to South Africa, Lebanon, Sudan, Germany, Italy and the UK, including Scotland. She came to know a number of displaced scientists, and learned that even after escaping universities that had been transformed to battlefields, they often found new struggles in their adopted countries. At the same time, many have found vital support from organisations such LASeR, the Scholar Rescue Fund, CARA and Scholars at Risk.

In the view of TWAS and many allied organisations, the global scientific community is obligated to support these displaced scientists so that their skills are cultivated and not lost. They have important potential for contributing to scientific progress. Someday, they will be needed to help rebuild their home countries.

Said Leghissa: "All the people who participated in this documentary, in front and behind the camera, did it for the same purpose: to have an impact, to support change."

Do you want to screen “Science in Exile” for your organisation or school?  Please contact scienceinexile@twas.org

Nicole Leghissa, an Italian filmmaker, is the director of "Science in Exile", produced in cooperation with The World Academy of Sciences (TWAS). She has worked for international production companies and broadcasters such as HBO, Channel 4 and ARTE, creating historical and cultural programmes and films. For the past five years, she has collaborated with TWAS and the Organization for Women in Science in the Developing World (OWSD), telling and visualizing stories of scientists doing research around the world. Her 2013 film "Seeds of Science" focused on the work and impact of four TWAS-supported researchers in Kenya. The film was broadcast on television, shown at high-level scientific and diplomatic meetings and featured in educational programmes.

The World Academy of Sciences for the advancement of science in developing countries – TWAS – supports sustainable prosperity through research, education, policy and diplomacy. TWAS was founded in 1983 by a distinguished group of scientists from the developing world, under the leadership of Abdus Salam, the Pakistani physicist and Nobel Prize winner. Today, TWAS has more than 1,200 elected Fellows from nearly 100 countries; 15 of them are Nobel laureates. The Academy is based in Trieste, Italy, on the campus of the Abdus Salam International Centre for Theoretical Physics (ICTP). Through more than three decades, its mission has focused on supporting and promoting excellence in scientific research in the developing world and applying scientific and engineering research to address global challenges. TWAS receives core funding from the government of Italy and essential programmatic funding from the Swedish International Development Cooperation Agency (Sida). It is a programme unit of the United Nations Educational, Scientific and Cultural Organization (UNESCO).