A Scientist Returns to Iraq

After two decades of war, international sanctions and dictatorship, Iraq is beginning to rebuild its science base, as academics who fled the country are now slowly coming back home. In the latest issue of the TWAS Newsletter, TWAS Fellowship recipient Fouad Majeed, who returned to Iraq after nearly four years in Italy and Brazil, tells how his country is now looking towards the future. 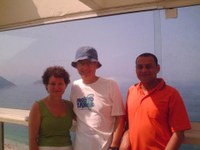 After receiving his PhD in theoretical physics in June 2005 from Al-Nahrain University in Baghdad, Iraq, Fouad Majeed left for a three-month research visit to the Abdus Salam International Centre for Theoretical Physics (ICTP), in Trieste, Italy. This in turn led to a one-year TWAS-CNPq (Brazil's National Council of Technological and Scientific Development) Postdoctoral Fellowship at the Instituto de Fisica of the Federal University of Rio de Janeiro (UFRJ).

While he was studying in Brazil, the situation in Iraq rapidly deteriorated. And when Majeed's fellowship ended, in May 2007, escalating sectarian violence and a deadly campaign to assassinate Iraqi academics conspired to keep him abroad. Not until November 2008, when security had at last significantly improved, did he feel he could return home. "Some 250 academics have returned to Iraq so far," Majeed says. While this represents only a fraction of the estimated 6,000 who fled since the 2003 invasion, he feels "the tide has turned."

The TWAS-CNPq fellowship allowed Majeed to study "reactions with weakly bound nuclei" - an area, he explains, which has "attracted considerable interest in the past decade." Majeed and his Brazilian colleagues "worked to develop more robust theoretical models to help guide the work of researchers doing reaction experiments," which involve aiming beams of 'projectile' nuclei at a 'target' nucleus, then observing the behaviour of emitted particles - which sheds light on the properties of a nucleus.

Back in Iraq, Majeed secured a post teaching physics at Babylon University, just south of Baghdad, through an Iraqi government programme encouraging academics to return. Though teachers and students, he says, must cope with infrastructure problems - including out-of-date textbooks, an insufficiently stocked library and poor telephone and internet connectivity - "the improved security throughout the country has allowed academics to once again look towards their future."

In addition to teaching his students physics, Majeed strives to make them aware of their opportunities. "They need to become more aware of the outside world," he says, "and to learn about study abroad programmes, for example." Having himself successfully completed studies abroad, Majeed is a role model for how to take advantage of such programmes. Moreover, he understands where his students are coming from and how such knowledge is hard to come by. "They are like I was before I left," he says.

"Students may earn their PhD," he continues, "but then they don't know how to find opportunities to continue their studies. When they ask me 'what is my future?', they are usually thinking about tomorrow or the day after tomorrow. They are taking a short-term view. I want them to think more long-term, to learn English, to find out about scientific opportunities abroad."

The Iraqi Ministry of Higher Education and Scientific Research has rolled out "a number of schemes to encourage postgraduate students to study abroad," Majeed notes. But he stresses that "the government will not be able to rebuild the scientific community on its own." Programmes focusing on South-South scientific exchange such as the TWAS fellowships will be crucial, he says, in "enabling young Iraqi scientists to acquire the knowledge and skills that will help them rebuild our country."

To read the entire article, click on the link below.