South African Minister of Science and Technology Derek Hanekom addressed Academy members during the ministerial session of the 24th TWAS General Meeting in Buenos Aires, Argentina. The following is a transcription of that address. 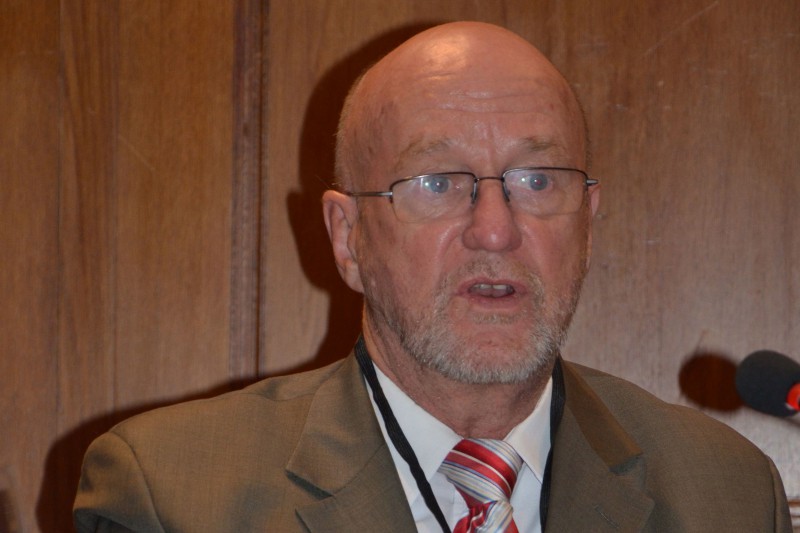 It is truly a huge honour to have been invited to join you at this 24th General Meeting of the World Academy of Sciences, to share some thoughts with you, to mingle with some of the best researchers and scientists from the TWAS member countries and to celebrate the outstanding contributions of all the award winners to science and society.

It is the human ability to invent, create and innovate that has enabled the transition from a hunter-gatherer existence, to primitive farming, to an era of modern agricultural practices, health technologies, communication technology and space science. The beginning of science and technology pioneering goes right back to the early use of stone tools, 1.6 million years ago, and that was by our early hominid ancestors, from whom we evolved.

Everyone in Argentina, known as the beef capital of the world, would know, of course, that cattle were first domesticated for milk and meat about 9000 years ago, in the Middle East.  A major technological advance occurred when the ox was used as a working animal, first to drag sledges, then to plough and pull carts with wheels. That advance did not happen by accident, it was the product of the human ability.

In ancient Greece, as early as 500 BC, patents were being granted to those who discovered or refined products and processes in a manner that would improve people’s lives. We have since seen the unprecedented development of technologies for transport, health, communication, manufacturing, and many other applications, all of which have helped improve the quality of life for billions of people, and have generated wealth amongst nations.

Since the heroic feat of sending the first human, Yuri Gagarin, to space in 1961, today we no longer dream of going to space – we run a lab in space in the form of the International Space Station.  Why is this important to us? Going to space not only captured the public imagination and led to an explosion in science fiction literature – space technologies are now central to telecommunications, navigation, health, education and natural resource management.

But as we all know, the growth of science and its benefits has been skewed in favour of the developed nations.  Major parts of the world remain burdened with poverty and disease, unable to meet basic needs such food, sanitation and shelter, and technological advances seem unable to penetrate and make a difference.

The Millennium Development Goals are perhaps the best way to reflect on these huge disparities. All 189 United Nations member states and at least 23 international organizations agreed to achieve these goals by the year 2015,  but as we get closer to this deadline it is clear that most developing countries have not even come close to the realisation of these targets.

Of course, this ongoing under-development is not the failing of science, but of man-made socio-economic systems.  Implementing solutions to these challenges require political commitment, not simply better science.  We need the scientists among you to continue producing the best science and innovations you can, and to continue pouring your hearts into student and research training.  But governments – especially in developing countries – need to do two things, in particular: (a) they need to ensure that the fruits of the modernisation that science, technology and innovation can bring about reach the poorest and most marginal in their societies, and (b) they need to maximise the support they provide to their scientists and their science systems.

Since this is a conference of scientists, I would like to focus on how governments of developing countries can support science. Firstly, Governments must take decisive steps in developing effective STI policies and funding them at adequate levels.  Countries that have developed and supported coherent STI frameworks are today the most prosperous – including countries with hardly any natural resource advantages.  Central to this is recognising exactly where your advantage might lie – in South Africa we have bet heavily on our geographic or natural advantages.  We have established a landscape of scientific institutions that we fund to the best of our abilities.  And we continue to invest heavily in human capital development.  Lastly, we very actively pursue international cooperation and partnerships.

Today, some of our institutions are doing world-class research, and making a significant contribution to global knowledge.  In the area of HIV/AIDS, South Africa is home to 17% of global infection.  This has served as an impetus to scientific endeavours that have contributed significantly to global prevention and treatment efforts. Tomorrow Professor Quarraisha Abdool Karim will provide more detail on her work on women initiated technologies to prevent HIV infection.

You will also hear from Professor Tebello Nyokong, who will be presenting her work on combination therapy to fight cancer.

Just a week ago a novel and breakthrough new form digital laser technology, developed by a young black scientist, was launched in South Africa. This technology will allow laser beams to be digitally shaped in just about any way without changing mirrors.

Many of you will be aware that one of the biggest science projects of our time, the Square Kilometer Array radio telescope, will be located mainly on the African continent.  As membership to the international SKA Organisation grows, it is our wish that more members will come from the South.  Under the SKA programme, South Africa is contributing to African human capital development through a bursary programme which to date has supported 500 postgraduate students.  Not only this, but the discipline of astronomy is being strengthened with several new astronomy departments and programmes among African universities.  Just as most of the spin-offs from the space programme could not have been predicted, the benefits flowing from these developments will certainly extend beyond astronomy.

Turning to the role of international partnerships, ladies and gentlemen, we need to acknowledge the enlightened role often played by partners in developing countries.  For example, Italy has provided consistent support for STI development in the South, having established several important international organisations in this respect, and continuing to host them.  TWAS has its roots in this political ambition, as do the International Centre for Theoretical Physics (ICTP) and the International Centre for Genetic Engineering and Biotechnology (ICGEB), and which currently has components in Trieste, Cape Town and New Delhi, as well as a number of centres in many developing countries.  These are not small contributions to the advancement of human capital, and the development of STI capabilities in developing countries.

The global challenges of underdevelopment, poverty and inequality cast a huge burden on individual states and have little respect for borders. As a result, we need to draw from each other’s strength and work in partnership by pooling resources, financial, human and institutional.  In this context I wish to acknowledge the strong bilateral partnerships we enjoy with many of the countries you – distinguished delegates – represent here today.

A specifically important and promising initiative, for example, is the joint Argentina-South Africa Centre for Nanotechnology, a bilateral initiative in which our two countries cooperate in the hosting of schools and joint research projects with a specific focus on nanotechnology.

International cooperation facilitates the exchange of lessons and experiences that we will all benefit from.  In this regard, South Africa is committed to playing an active role in South-South initiatives such as this one.  We have also strengthened our partnership with the North, and as a result have benefited from associations with multilateral bodies such as the OECD.

What is critical is that, given the fact that most of our challenges are shared, we need to strengthen the role of TWAS, especially the promotion of scientific excellence in the developing world.  There is a need to ensure that young scientists are nurtured.  We must also work closely to ensure that TWAS is properly resourced to execute its mandate.

As a sign of South Africa’s commitment to deeper South-South cooperation, especially across the African continent, and a strengthening of TWAS as an agency in this regard, I am especially pleased to announce that, in partnership with TWAS, my department will be establishing joint fellowship programmes to support doctoral and postdoctoral training of students from developing countries.  In total we will initially establish no less than 100 doctoral and postdoctoral fellowships for training opportunities in South African universities and research institutions, as well as the ICGEB and ICTP; this number might grow depending on the uptake of the fellowships.

Ladies and gentleman, in order for TWAS to be strong, we also need to strengthen national and regional academies.  When the quality of our academics improves, we will be able to produce quality graduates, who in turn will generate knowledge and technologies that addressed the prevailing challenges.  In this context I also wish to acknowledge the work down by the South African Academy of Science in its partnership with TWAS.

In conclusion, TWAS must play a critical role in mobilising science and scientists, from the South, strengthening their quest for support from their respective governments.  For as much as we agree on the importance of international partnerships to strengthen ourselves, national partnerships between government, science, the private sector and the civic sector are perhaps even more important.

Although the challenges we face are daunting, our common recognition of our common future is a source of inspiration to me.  This notion was wonderfully captured in the following words of Frank Borman, who was part of the Apollo 8 mission:

“When you're finally up at the moon looking back on earth, all those differences and nationalistic traits are pretty well going to blend, and you're going to get a concept that maybe this really is one world and why the hell can't we learn to live together like decent people."