A 'special place' for global science

Argentina's Instituto Balseiro has become a centre of world-class science. Its character and creativity, however, are distinctly Latin American. 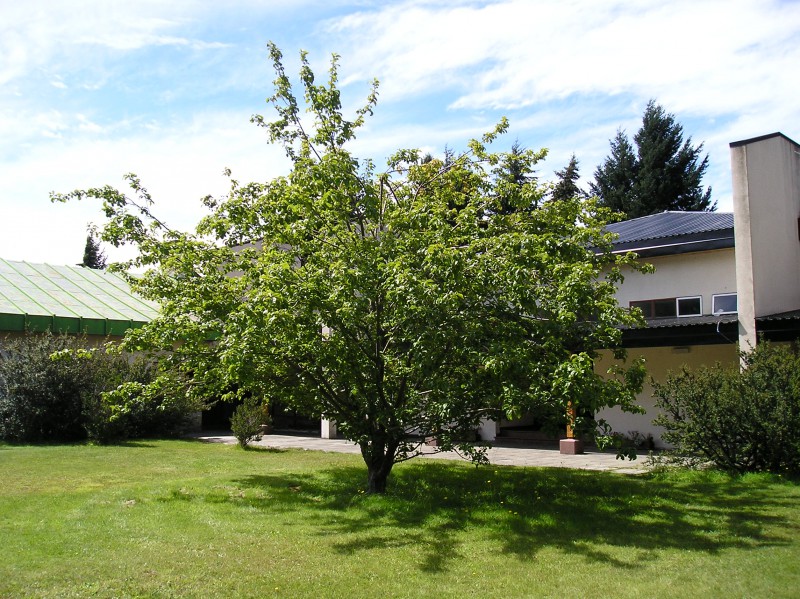 In a garden outside the library at the Instituto Balseiro, there is an apple tree that is a direct descendant of the English tree that, nearly 350 years ago, gave Isaac Newton his flash of insight about gravity. It is not a grand monument, nor is it conspicuous, and yet it is a powerful reminder of the scientific and engineering aspirations on this campus in the Argentinian foothills of the Andes.

Far from Princeton and Berkeley, far from Stuttgart and Paris, Balseiro has become a centre of physics, nuclear engineering and other fields. Its students and researchers are admired throughout Latin America and in the world capitals of science, and with sustained support from the Argentinian government, they have helped the Institute achieve a deep impact throughout the nation’s educational system, its government and its surging technology enterprises.

Manuel Cardona, one of the world’s most influential physicists, calls it a “very special” place. What makes it special? “The strong selection of the entering students”, he says. “The location in a beautiful, but strongly isolated place, almost 2,000 kilometres from the very large and restless capital of Buenos Aires. The connections with the developed world, which provide opportunities to its graduates and students. And the tradition – the awareness that many graduates have made it in the best institutions of the world and are worthy of emulation.”

Argentina has a long history of excellence in science, but as TWAS convenes its 24th General Meeting in Buenos Aires, the nation’s scientific work and energy are surging. And the accomplishments at Instituto Balseiro, one of several subjects that are the focus of the latest edition of the TWAS Newsletter, are an important source of strength and confidence.

The nation is building satellites for NASA and research nuclear reactors for nations around the world. It is a leading force in fields ranging from agriculture to biotechnology and nanotechnology. It is a global centre for the study of high-energy cosmic rays. And the Instituto Balseiro – the IB, for short – has a role in many of these accomplishments.

People who know Balseiro also see something almost intangible that sets it apart – a creative streak that shapes the culture of the place and the people who spend time there.

Cardona, a Spaniard by birth and now also German, is one of the most cited physicists of modern times, and he helped found the Max Planck Institute of Solid State Research in Stuttgart. He hosted a number of Balseiro graduates there and when he was on the faculty of Brown University in the United States. He also has written about the Institute’s history.

He offers an unvarnished view of how it was born: In the years after World War II, an Austrian chemist persuaded Argentinian president Juan Perón that he had invented a way to produce energy at low cost through nuclear fusion. Perón’s government made a significant investment in the Huemul Project, a complex of laboratories and research facilities in the small Patagonian city of Bariloche. But as Cardona tells it, “the fraud was discovered and attributed to the lack of [scientific] competency in the country.”

A group of researchers, including physicist José Antonio Balseiro, persuaded Peron that if Argentina wanted to prevent a repetition of the embarrassing chapter, it had to train scientists. Vacated real estate and labs were available and the recently created National Atomic Energy Commission (Comisión Nacional de Energía Atómica, or CNEA) allocated funds. In 1955, the new Instituto de Física de Bariloche was founded. Balseiro was appointed director; after his death in 1962, it was renamed Instituto Balseiro.

Through the years, a long period of political repression and waves of economic crisis have driven many graduates and faculty to work in Brazil and Chile, or in the United States and Europe. At the same time, though, many Argentinian scientists and engineers found a refuge in Bariloche. The small city is sur-rounded by Nahuel Huapi National Park. Among the founders and later faculty members, there was a great interest in music, literature and religion. The distance from Buenos Aires – at least 90 minutes by plane, and up to 20 hours by car – created a strong sense of community. “Bariloche is geographically isolated from the rest of the world”, says physicist Alberto Rojo, who earned his PhD at the Instituto in the late 1980s and early 1990s. “So far south, it was protected from the political oscillations of Argentina’s Dirty War [in the 1970s].” Given these factors, Rojo said, students and faculty find “a sense of monastic enclosure, which makes it interesting as an incubator of creativity.”

The components of success

Over the course of almost 60 years, IB faculty and students have achieved remarkable accomplishments and individual influence.

Leopoldo Falicov was in the first graduating class of physicists in 1958, and went on to a career of great influence and many honors as a theoretical physicist and teacher. For many years he was based at the University of California at Berkeley, but he was known for building expansive networks of scientists from throughout Latin America. He was known as well for his love of poetry, literature and music. Among many awards and prizes, he was elected to Argentina’s Academia Nacional de Ciencias Exactas, Fisicas y Naturales; the US National Academy of Sciences; and TWAS.

Juan Martín Maldacena earned his undergraduate degree from Balseiro in 1991; his work on quantum gravity, string theory and related fields has made him one of the world’s most influential theoretical physicists. He won a ‘genius grant’ from the MacArthur Foundation in the United States; he also has won the Sackler Prize and the Dirac Medal. Since 2001, he has been a professor at the Institute for Advanced Study in Princeton, New Jersey.

Rojo is not only an extensively published physicist, but also a premier guitarist who has recorded with top Latin American musical artists. He created and appeared in the Argentinian television series Artistas de la ciencia (Artists of science) and has written extensively on the intersection of science, music, literature and poetry. Now on the faculty of Oakland University in Michigan (United States), he also has conducted many public engagement events that feature both music and science.

Today, Instituto Balseiro has about 150 faculty members in engineering and 100 in physics. Among them are many with close ties to the Abdus Salam International Centre for Theoretical Physics in Trieste, Italy, and winners of many of the most important science prizes in Argentina and the world.

In part because the Instituto operates under Argentina’s Atomic Centre at Bariloche, it offers the highly advanced equipment in both physics and nuclear science, including particle accelerators, a collection of advanced microscopes, a nanofabrication laboratory, cryogenic facilities for studying condensed matter at low temperatures, and the small RA6 research reactor. That makes IB a draw for students from throughout Latin America and sometimes Europe. The competition is intense: After two years at an undergraduate institution, students take IB’s rigorous entry exam. Alex Fainstein, deputy director for physics, said the process yields a class of 50–60 new undergraduates every year in physics, nuclear engineering, mechanical engineering and now telecommunications engineering. In addition, there are about 20 new master’s degree students and 20 PhD students each year.

All of the students receive fellowships, which pay for education, housing and food, plus extensive related support. In Balseiro’s close-knit community, they have access even to high-level faculty members and research opportunities. But the place demands hard work.

“Usually people who come here are very committed”, said Fainstein. “There’s a collective response...a kind of ambience that makes them work very hard. Everybody wants to get the most out of themselves.”

Projects at the frontier of global sciences

When the Institute was created and in ensuing years, says Fainstein, its main focus was on physics, engineering and related fields that “were critical for the implementation of the nuclear engineering sector” in the late 1970s. In the 1980s, interests increased to include high-temperature superconductivity and other fields.

In the past decade, nanoscience has been prominent, and “recently very interesting applications in the medical field are emerging”, said Ingo Allekotte, present head of the physics department. A radiotherapy and nuclear medicine centre now under construction is expected to provide a platform for research in medical diagnostics and the use of different types of radiation to treat cancer, brain diseases and other conditions.

Allekotte himself is deputy project manager of the Pierre Auger Observatory, an international facility established to detect and study ultra-high-energy cosmic rays. The project involves a new USD53 million centre and the work of more than 500 physicists from around the world; its detection technology is spread over 3,000 square kilometres in western Argentina.

“One wants to understand what produces these high-energy particles, how they propagate and so forth”, he explained. “In the end, you get knowledge – why this phenomenon occurs and how it occurs. And it can lead you to develop new technologies.”

The power of international networks

In spite of its isolation, the Instituto Balseiro is the hub of a vibrant global network. It’s evident in the student body, where 10–15% of students are from other Latin American nations, and in dozens of alumni who teach and work worldwide. Longstanding ties connect IB with major science centres in France, Germany, Spain and the United States, and also with Brazil, India, Japan and other nations. The United Nations-based International Atomic Energy Commission (IAEA) also is a close partner. Lolich, for example, serves on an IAEA panel that is studying security at nuclear research reactors. Raúl O. Barrachina, a former Balseiro director who currently serves on the faculty while holding posts with CNEA and Centro Atómico Bariloche, cites a 2010 IAEA meeting in Peru that created the Latin-American Network for Education in Nuclear Technology.

Indeed, the joint research projects with Latin American countries may be critically important for building research capacity in the developing region.

As another example, Barrachina noted Balseiro’s master’s degree in medical physics, where more than half of the graduates come from other countries in Latin America and the Caribbean Region.

Fainstein explained that Argentina’s commitment to Latin American networks reflects the nation’s broad support of science and engineering. Balseiro is a microcosm for the new commitment.

“When I studied here”, he recalled, “we were a small community trying to be the best graduates we could be, but it wasn’t always clear what the graduates would do. Generally, people would go abroad. Now, the situation has changed.” With a huge demand for engineers, Balseiro students often are pulled into the Argentinian job market – and onto big projects – before they get a PhD.

The campus, too, has been transformed. “We have doubled the built area – in the past five years, we have built as much as in the previous 53 years. We have so many new buildings: research buildings, a new library, two new buildings for student labs. Ten years ago, we did not have money to paint the walls. Now people come back here and they don’t recognize it.”

Fainstein would like to see the student body grow, too. But he cautions that growth must be carefully managed to maintain Balseiro’s standards. “Yes, we are growing”, he said. “The challenge is to do it well.”