Science speaks a unique language, which crosses borders and acts as a unifying factor for sustainable growth. Far-sighted policy-makers need to advocate this concept to propel development and better quality of life, and science academies need to play a proactive role to create a high-impact interface between science, policy and society. 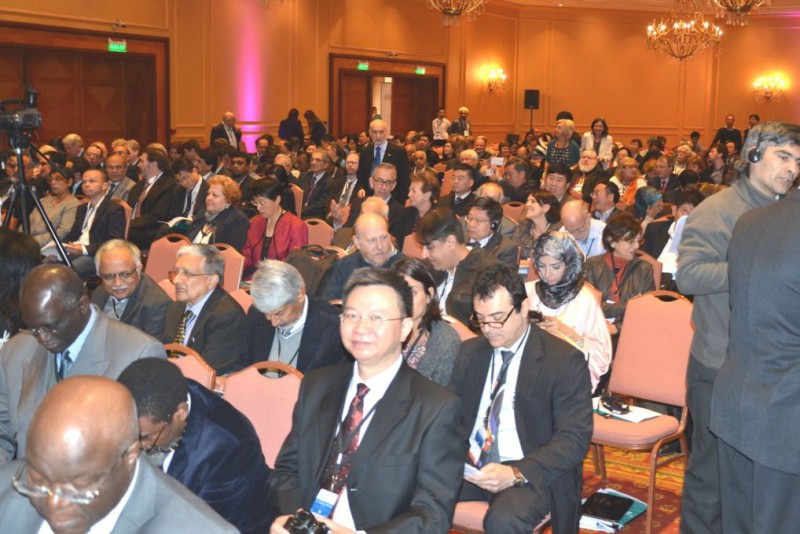 Such ideas were a recurring theme accompanying the 24th TWAS General Meeting opening ceremony, held on 1 October in Buenos Aires. TWAS, the world academy of sciences for the advancement of science in developing countries, was founded in 1983 by Pakistani physicist and Nobel Laureate Abdus Salam, and this year it celebrates its 30th anniversary in Buenos Aires. The opening ceremony, which hosted almost 450 attendees from 48 different countries was followed by television networks and journals from Buenos Aires, and broadcasted via social media.

On the podium for the welcome address was Argentinan Minister of science, technology and innovative production, Lino Barañao; TWAS President Bai Chunli; TWAS Executive Director Romain Murenzi; the Ambassador of Sweden to Argentina, Gufran Al-Nadaf; Roberto Salvarezza, the president of Consejo Nacional de Investigaciones Científicas y Técnicas (CONICET); Alessandra Di Pippo, second secretary in the unit for scientific and technological cooperation at the Italian Minister for Foreign Affairs; and George He, senior vice president and chief technology officer of the Chinese computer company Lenovo, which is sponsoring the TWAS-Lenovo Prize starting this year.

Read Spanish-language coverage of the TWAS General Meeting from CONICET, the National Scientific and Technical Research Council of Argentina.

Bai, who also serves as president of the Chinese Academy of Sciences, offered the opening address, and gave the audience a heartfelt welcome. Bai recalled the Academy’s history, when a group of visionary scientists dreamed of building science and technology in developing nations, to give people chances for a better quality of life. “At that time, there were very few powerful advocates for building science in developing countries,” he said. “But with great energy and skill, TWAS began building support for the idea, both among individual scientists and labs, and in universities, major science organizations and political capitals.” Nations that once were very poor have invested in research and development, and those investments are creating significant dividends.

Argentina, he said, has long been a leader and a model for science in developing world, and that it also has achieved remarkable recent progress. Under Argentinian President Cristina Fernández de Kirchner, the country has emerged again as a science and engineering leader. Its Pierre Auger Observatory, for example, is an international centre for the study of ultra-high-energy cosmic rays, while its company INVAP “has achieved the rare distinction of building a satellite for NASA,” he recalled.

“Buenos Aires is a very auspicious place for TWAS to celebrate its 30th anniversary,” he concluded. “I believe that at this meeting, with the help of our Argentinian partners, we will see TWAS at its strongest, built on a rock-solid foundation, and reaching toward the stars.”

Barañao underscored Argentina’s renewed commitment to science. There was a time when science was disdained, and scientists were seen as dangerous. But we are fortunate, he added, “because we now live in a period where science is shaping the life of many countries”.  TWAS’s 24th General Meeting, Barañao added, is instrumental in the dissemination of a broader message: it showcases that science has no borders and that, through science, we all can confront and share knowledge, working to better the lives all people.

Alessandra Di Pippo, from the Italian Minster of Foreign Affairs, said that Italy considers TWAS as a virtuous organization. Di Pippo confirmed the Italian commitment to the Academy, which will continue despite the current economic crisis.

The Swedish International Development Cooperation Agency (SIDA) has long been a central TWAS partner and supporter, and Al-Nadaf suggested that the partnership is natural. SIDA’s activity is focused on alleviating poverty, promoting scientific cooperation and generating new knowledge, and “TWAS is a strong voice for promotion of scientific capacity-building in the world,” she said. “Since 1993, through TWAS’s research programmes, TWAS and SIDA have had a successful cooperation that has expanded with time, meeting ever growing needs of our times.”

Jorge Grandi, director of UNESCO’S regional bureau for science in Latin America and the Caribbean from Uruguay, on behalf of the Assistant Director-General for UNESCO Gretchen Kalonji, highlighted the role of academies like TWAS in facilitating the production of knowledge, acting as agents of social change and innovators, committed to building knowledge networks among young scientists and researchers. “UNESCO is pleased for its collaboration with TWAS over the years, and looks forward to future opportunities to work together, especially with the challenges we face in targeting science to ensuring global sustainability,” Grandi said. He encouraged universities and private partners to join forces and cooperate, engaging in partnerships that may shape international agendas in addressing sustainable development issues.

George, too, emphasized the productive nature of TWAS partnerships. “I’m not a scientist,” he said. “But I have a profound respect for scientists, as they explore the world and the universe. This is why we, at Lenovo, are proud to support TWAS and scientific research, and will continue to do so in the future, committing to help developing countries build a future.”

As the event was coming to conclusion, Romain Murenzi, TWAS’s executive director, recalled that TWAS’s major mission has always been to support and encourage scientists working and living in developing countries, who gave valuable contributions to advancement of scientific knowledge. He then joined with Barañao and Bai to present awards and medals to more than a dozen winners. Among them was Claudio Bunster Weitzmann, Chilean physicist who was awarded the first TWAS-Lenovo Prize for his contribution to the understanding of the gravitational force and the quirky physics of tiny, fundamental particles of matter.

TWAS’s General Meeting is an annual appointment that members and global science leaders do not miss. During the four-day event, from 1 to 4 October, presentations and lectures give the audience the chance to learn about the best of science from developing countries. This year, discussions will focus especially on innovation in Latin America, and especially in Argentina.