Trieste, a global city of science

Trieste, Italy – TWAS's home city – is well-known as a dynamic research centre and a beacon of hope for scientists from the developing world. But at the launch of a new book, Trieste: City of Science and Higher Education, local leaders said the city should seek to expand its impact to further benefit both the region and global science. 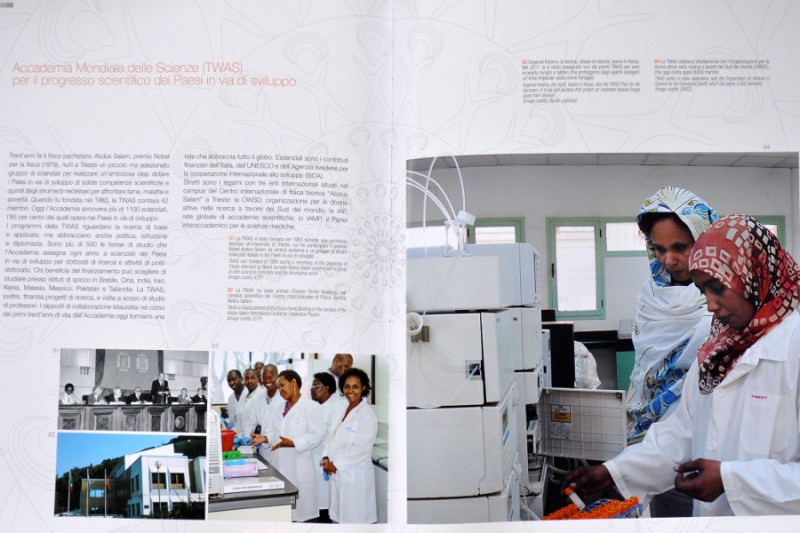 Though it is the smallest province of Italy, Trieste hosts more than 30 national and international centres and companies dedicated to research and higher education, 5,000 permanent foreign scientists and some 13,000 students and researchers. The image that jumps from the vivid, bi-lingual pages of Trieste: City of Science and Higher Education, is of a dynamic capital of research, focused on sustainable growth and development, with impact that extends beyond Italy to the rest of Europe and the developing world.

And while the city is celebrated for its opportunities and accomplishments, the book launch made clear that local political and educational leaders believe that the positive impact of the "Trieste System" can be extended by innovative new efforts that would expand the city's scientific network and create new jobs.

Trieste Mayor Roberto Cosolini noted how the ranks of foreign scientists have grown dramatically in the city. But, he said: "We need to increase the city’s awareness about its potential."

Loredana Panariti, counselor for training, education and research for the region of Friuli Venezia Giulia, struck a similar note. “The idea of training and provide higher education is embedded in the city’s DNA," Panariti said. Today, "Trieste needs to invest more energy in the promotion of its scientific network and to reinforce its links with the regional territory.”

Trieste: City of Science and Higher Education was published by APS Communication a local publisher that has been following the scientific community of Trieste for 15 years. The book can be purchased through the APS Communication website.

It was officially launched during a public event held 13 December at the University of Trieste, attended by University Rector Maurizio Fermeglia, regional and governmental representatives and scientists who are based in the city or visiting from nations in the developing world.

In brisk Italian and English texts and more than 300 photographs, the book showcases the range of Trieste's scientific enterprise: its strong expertise in nanotechnology applied to new materials and dental prostheses, its competitiveness in innovative in environmental studies, and its place as a global centre for research in theoretical physics. Readers learn that Trieste has been among the partners of NASA's Fermi Gamma-ray Space Telescope, aimed at studying cosmic rays and dark matter, and that it has had a starring role in breakthroughs in neuroscience and biotechnology.

A graphic technique called “enhanced reality” helps to propel images out of the pages, giving the book a strong sense of action and immediacy. Science emerges as a profoundly human enterprise.

“We used the enhanced reality to provide an extra graphic embellishment to our volume,” said Federica Zar, APS’s owner and editor-in-chief of the book. “But the value of the book rests in being an up-to-date portrait of the scientific community living and working in Trieste today. It is a unique tool for international marketing and promotion.” 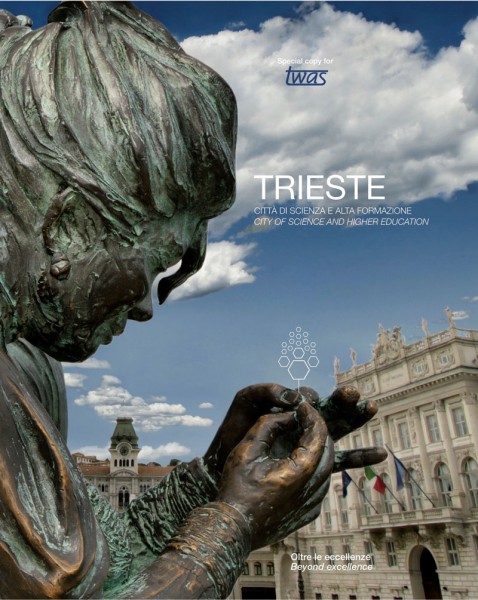 The volume, in fact, combines a historic perspective of the early events that promoted the establishment of a first nucleus of scientists, when Empress Mary Theresa of Austria founded the Nautical School in 1753. But it also provides a sharp portrait of today's “Trieste System” and Trieste, in fact, has an unusually high concentration of science-linked personnel (37 of every 1,000 active workers) and a unique network of international institutions working to promote sustainable development.

Three such institutions, The Abdus Salam International Centre for Theoretical Physics (ICTP), the International Centre for Genetic Engineering and Biotechnology (ICGEB) and TWAS were selected as members of the United Nations system to participate in a roundtable to launch the book. They are international, nonprofit research organizations, all members of the United Nations system, and all with important support from the government of Italy; they are dedicated to training and instructing foreign scientists to use science for the wellbeing of their countries.

The same concept was expressed by Mauro Giacca, the director of ICGEB, who noted that not all the scientists want, or have the capacity, to be entrepreneurs and move from bench to start-up companies and spin-offs. “For Trieste to achieve its full potential in this field we should seek experts’ advise from outside,” he said.

It is through international relationships that the Trieste System performs at best. During its 30 years of activity, for example, TWAS has had a tremendous impact in countries in the South of the world, but always in close partnership with Trieste and Italy, observed Edward Lempinen, TWAS’s Public Information Officer.

“Every year, thousands of scientists from around the world come through Trieste for research or conferences, or they benefit from programmes that are organized here," Lempinen said. "Many of these researchers are from developing nations, where often there are few career-support opportunities. In this sense, Trieste is not just a strong centre of research, but it represents a beacon of hope."

A vibrant affirmation of the results that the Trieste System has achieved during decades of work came from the three foreign scientists attending the round table. Nepali researcher and TWAS Young Affiliate Ajay Kumar Jha, now involved in energy studies at the Harbin Institute of Technology, Harbin (China), expressed his gratitude to TWAS for the opportunities he has had to increase his competences and to establish new joint research projects all over the world. He was in Trieste in December for a TWAS-organized workshop on science diplomacy and energy policy.

“If many scientists from developing countries are now more confident in their scientific capacity this is due in part to the experience they have acquired within the Trieste System,” said Kumar Narain, head of the high energy, cosmology and astroparticle physics research group at ICTP. “After colonialism, developing countries like India used to position themselves in the backstage. Today we are much more aware that we have our own role in the global scientific landscape.”

And Maryse Nkoua, a former student of the postgraduate diploma programme at ICTP, praised the general atmosphere that the city offers, which makes her feel at home.

According to Alessandra Pastorelli, from the general directorate for the promotion of the country system at the Ministry of Foreign Affairs, the Trieste System and its international organizations produce national pride for this corner of Italy, because the system helps the ministry to be active in 127 countries.

“We still have a long way to go, and I’d like to share my dream with you,” Mayor Cosolini said in his concluding remarks. “Trieste has a name in India, South America and elsewhere. But we need to increase the City’s awareness about its potential. How? Through the establishment of a hub, in the city’s centre, to welcome visitors and citizens. Perhaps also through a scientific itinerary that reports the major events that have forged the Trieste System, making us what we are now.”