An eminent Mexican biologist, whose research helped to spur the creation of the first genetically modified plants, and an internationally renowned Indian chemist, whose innovative laboratory techniques have led to the synthesis of more than 50 natural products, have been awarded the Trieste Science Prize for 2007.

The Trieste Science Prize, administered by TWAS and funded by illycaffè provides international recognition to outstanding scientists living and working in the developing world. Winners share a US$100,000 cash award. 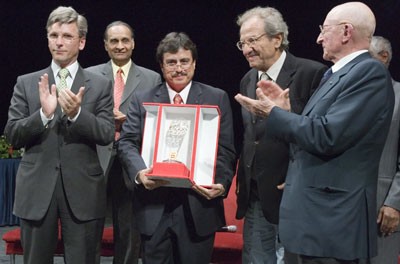 Luis Rafael Herrera-Estrella, director of the National Laboratory for Genomics of Biodiversity and professor of plant genetic engineering at the Centre of Research and Advanced Studies in Irapuato, Mexico, helped to pioneer the field of plant molecular biology and genetic engineering. Plant transformation techniques developed by Herrera-Estrella and his colleagues have had a significant impact on the commercial production of genetically modified plants currently grown on more than 100 million hectares worldwide.

Herrera-Estrella's work has largely focused on crop species of economic importance to Latin America, including asparagus, maize and papaya. In addition, his analysis of the molecular mechanisms of toxins, produced by the disease-causing bacterium Pseudomonas syringae pv phaseolicola, has led to the development of transgenic beans resistant to the disease. Herrera-Estrella has recently turned his attention to understanding the molecular mechanisms that make it possible for plants to tolerate toxic concentrations of aluminum and, more generally, that enable plants to adapt to nutrient-deficient soils. This is a critically important in Latin America, where some 500 million hectares of farmland are deficient in phosphorus, an essential nutrient for healthy plant growth and crop production. 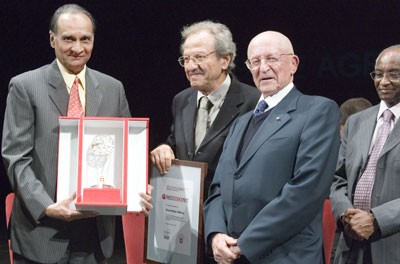 Goverdhan Mehta, CSIR Bhatnagar fellow and honorary professor at the Department of Organic Chemistry at the Indian Institute of Science in Bangalore, and distinguished research professor at the University of Hyderabad in India, is a world-renowned chemist who has made breakthrough contributions in a variety of fields related to organic synthesis.

His wide-ranging interests include the synthesis of biologically significant and architecturally challenging natural products; the design of novel molecules; the study of stereoelectronic effects; and super molecular chemistry. His synthesis techniques have been widely praised for their elegance and originality. Otteliones A and B, currently being tested for their anti-tumor activity, are among the 50 complex and biologically active natural products that Mehta and his group have synthesized.

Mehta's work has led to patents for hybrid drugs for the treatment of cancer that combine the drugs' conventional cytotoxic action with the ability to 'switch on' the drugs in the desired location using light as a stimulus. He and his group have also synthesized carbon compounds that may have potential applications in nanotechnology devices.

Beyond the laboratory, Mehta has made significant contributions to science education and science policy in India and abroad. He is currently president of the International Council for Science (ICSU) in Paris, France, and a member of the Scientific Advisory Committee to the Prime Minister of India.

"Trieste Science Prize winners," says Jacob Palis, president of TWAS, "put a spotlight on the enormous impact that scientists from the developing world are making to international science. Their efforts are not only helping their nations to advance but are also making our global community a better place."

"illycaffè," says Andrea Illy, the company's president and chief executive officer, "is pleased to honour scientists who are making significant contributions to society. The Trieste Science Prize symbolizes excellence. The success of the recipients has enriched both their societies and ours. "

Luis Rafael Herrera-Estrella and Goverdhan Mehta will receive their prizes at an award ceremony in Trieste's theatre Politeama Rossetti on 19 May 2007 in the framework of FEST, the first science media fair taking place in Trieste from 17 to 20 May.

Trieste Science Prize. The Trieste Science Prize, now in its third year, is designed to bring recognition and distinction to the developing world's most eminent scientists who have not yet been honoured by other international award schemes dedicated to honouring scientific achievement. It is named after Trieste, a city in northeast Italy that has made fundamental contributions to the promotion of science in the developing world. The prize has received the high patronage of the President of Italy. It is given annually and rotates among the following fields: biological sciences and physics/astrophysics (2005); mathematics and medical sciences (2006); agricultural sciences and chemical sciences (2007); and earth and engineering sciences (2008).

illycaffè, based in Trieste, Italy, produces and markets a unique blend of espresso coffee in 140 countries around the world. The company fosters long-term collaborations with the world's best Arabica coffee growers–in Brazil, Central America, India and Africa–providing know-how and technology and offering above-market prices. More than 5 million illycaffè espressos are served each day in some 50,000 of the world's finest restaurants and coffee bars. www.illy.com

Download(s):
Tags:
Ernesto Illy Trieste Science Prize
molecular biology
news_item
2007
Honours
chemistry
Your subscription could not be saved. Please try again.
Your subscription has been successful. An e-mail with a link has been sent to confirm your subscription.
This website does not use profiling cookies, but only first and third party technical cookies, including cookies from social media plugins.
To learn more about our cookie policy or to change your cookie settings, click here.
By using this website and clicking “accept”, you consent to the use of cookies in accordance with our cookie policy.Accept