The recipients of the 2009 TWAS Medals – awarded in recognition of significant contributions to a research field – lectured about key aspects of their work at the Academy's 11th General Conference in Durban, South Africa. This year's Medal Lecturers are: Wieland Gevers (South Africa), Li Zhensheng (China) and Sergio Rezende (Brazil). 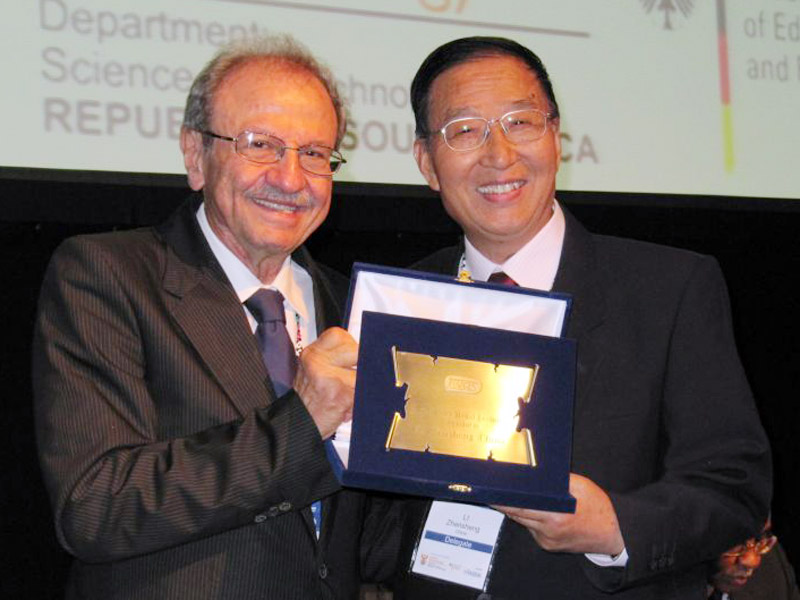 The TWAS Medals have been given annually since 1996 to Academy members actively engaged in ground-breaking research, in recognition of important achievements in their fields. Recipients are invited to lecture on a main aspect of their work and are presented with a commemorative plaque as a token of appreciation. The Academy selects three members each year for the honour, at its general conference, who then present their lectures the following year.

In his presentation, Wieland Gevers (TWAS Fellow 2002), General Secretary, Academy of Science of South Africa (ASSAf), spoke on "Biomedical Science in Two Worlds" – the two worlds being the developed and the developing. It is a subject he knows well, having earned his PhD at Oxford University (where he worked under Sir Hans Krebs) and continued his studies at Rockefeller University, New York (with Fritz Lipmann), before returning to his native South Africa. Gevers spoke on the challenges and satisfactions involved in working in such different environments.

LI Zhensheng (TWAS Fellow 1990), research professor, Institute of Genetics and Developmental Biology, Chinese Academy of Sciences (CAS), lectured on "The contribution of distant hybridization with decaploidAgropyron elongatum to wheat improvement in China". His talk outlined the major achievements in wheat genetic improvement in his country over the past half century (including increasing grain yields fivefold), summarized the role of a distant hybridization system, and discussed future challenges in wheat breeding, including how to increase efficient use of water and light.

The lecture of Sergio Rezende (TWAS Fellow 2004), professor, Department of Physics, Federal University of Pernambuco, Brazil, bore the intriguing title "Making Waves with Spins for 40 Years". He explained how magnetic materials have played a key role in modern industrial society – for example in the conversion between electrical and mechanical energy through motors and generators, and in microwave communication. His talk focused on spin waves, which, he explained, though first observed experimentally 50 years ago, continue to reveal new and subtle properties.