The 2008 TWAS Prizes were presented to the recipients at the Academy's 11th General Conference and 20th General Meeting in Durban, South Africa. 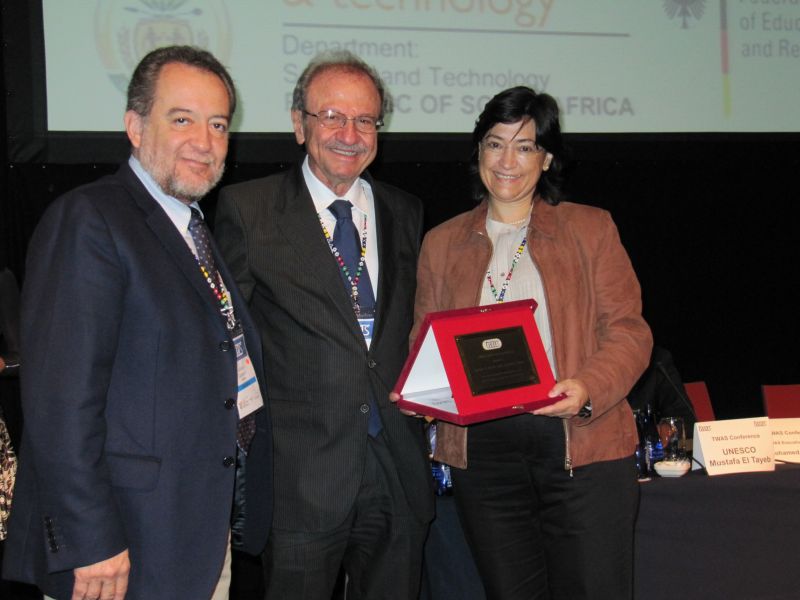 The scientists, whose names were announced at the Academy's 19th General Meeting last year, were presented with a plaque detailing their major contributions to their fields as well as a cheque for USD15,000. Conference attendees in Durban will have the opportunity to find out more about their innovative research at the lectures which will be given by the prize winners on 22 October.

SHAW Jei-Fu, president of National Chung Hsing University, Taiwan, China, has won the 2008 TWAS Prize in the agricultural sciences for his outstanding contributions to the use of enzyme biotechnology in extending the shelf lives of food commodities and for developing applications of enzyme biotechnology to improve high-value agricultural products.

Susana LOPEZ and Carlos ARIAS of the Biotechnology Institute of the National Autonomous University of Mexico in Cuernavaca, Mexico, have been named winners of the 2008 TWAS Prize in biology for their fundamental contributions to the understanding of pathogen-host cell interactions, particularly, of the early events of rotavirus cell infection.

ZHAO Dongyuan, professor, Department of Chemistry, Fudan University, Shanghai, China, has won the 2008 TWAS Prize in chemistry for his outstanding contributions in the research field of mesoporous materials.

SUN Jimin, professor, Institute of Geology and Geophysics, Chinese Academy of Sciences, Beijing, China, has won the 2008 TWAS Prize for earth sciences for his fundamental contributions to the studies of desert evolution and aeolian deposits.

Ashutosh SHARMA of the Indian Institute of Technology in Kanpur, India, has won the 2008 TWAS Prize in the engineering sciences for his fundamental contributions to meso-mechanics, instabilities and self-organization in soft thin films; meso-patterning; wetting; adhesion and interfacial interactions.

Vasudevan SRINIVAS of the Tata Institute of Fundamental Research in Mumbai, India, has been named the winner of the 2008 TWAS Prize in mathematics for his basic contributions to algebraic geometry that have helped deepen our understanding of cycles, motives and K-theory.

Salim S. ABDOOL KARIM of the Doris Duke Medical Research Institute, Nelson R Mandela School of Medicine, University of KwaZulu-Natal in South Africa has won he 2008 TWAS Prize in the medical sciences for his exceptional and distinguished contributions in medicine and public health, specifically for HIV prevention.

Ali Hani CHAMSEDDINE and Predhiman Krishan KAW share the 2008 TWAS Prize in Physics. Chamseddine, Physics Department of the American University of Beirut in Lebanon, is being honoured for his fundamental contributions to supergravity and noncommutative geometry. Kaw, Institute for Plasma Research in Bhat, Gandhinagar, India, is recognized for pioneering and seminal contributions to physics of laser plasma interactions, tokamak transport, current drive and magnetic reconnection, and dusty, quark-gluon and ionospheric plasmas.