The part academia can play in world diplomacy

How can scientists in the world of academia create a more peaceful, prosperous and equal world? Ivo Šlaus, a physicist and president of the World Academy of Art & Science (WAAS), raised these questions Monday afternoon at the Adriatico Guesthouse in Grignano, arguing that it's essential that academics of all stripes engage with the political realities of the world. 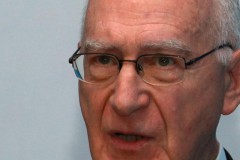 The world faces countless dangers, from swelling unemployment rates from an unstable economy to the looming shadow of climate change, which could permanently alter human cultures worldwide. "Science is the easy part. Politics is a complicated part", Šlaus said. "Everything that has to be done now is the domain of politics."

For the last 40 years, Šlaus pointed out, opinion polls across the globe have shown that 70-to-75% of the public are unhappy with their governments. He said the question academics have to ask is: How can we improve that number? "You really have to involve the public, the culture, and the government as much as possible. It cannot be just the government using the culture of its country; the using of its people", Šlaus said.

The seminar was organized by TWAS and is part of a series on science and diplomacy, initiated by TWAS in partnership with AAAS, the American Association for the Advancement of Science.

"Academies are an institutional structure providing education, curiosity, cooperation and competition", Šlaus said. "We have to assure cooperative security in an uncertain and unstable world, stimulating and assuring creativity, generating innovative, out-of-the-box ideas. We have to assure human dignity in a world that is unequal. And this all should be providing a basis for courage."

The solution to the problems of the world were not clear, he said, other than what the world needs is more people working to come up with solutions. However, though experience, academics can rule out some routes that have been tried and failed. "We can clearly claim war or any violence is out of the question – it will not bring you anywhere. Large inequalities are not good", Šlaus said. "Market is on one side good because it gives you even more freedom than democracy does", he noted, but still a free market has problems. "One of them is unemployment, which is a market phenomenon. The other is these bubbles, which we don't know how to control."

Šlaus has taught at several American universities, including University of California, Los Angeles; Georgetown University in Washington; Duke University, North Carolina. In the years 2000-2003 he was a member of the Parliament of Croatia, and currently deals with security and issues related to the knowledge society.

WAAS is the world's scientific non-governmental organization, which has more than 600 members from 82 countries. Created in 1960, but already conceived after World War II, as one of its prime movers also such prestigious names as those of Albert Einstein, the American physicist Robert Oppenheimer and the philosopher and mathematician Bertrand Russell.

This event was part of the TWAS Science Diplomacy programme, which includes lectures, seminars, workshops, international meetings, and a regional prize. Other seminars and lectures have been held by New South Wales Chief Scientist and Engineer Mary O'Kane, AAAS Center for Science Diplomacy director Vaughan Turekian and Paul van Gardingen, the director of the Ecosystem Services for Poverty Alleviation Programme at the University of Edinburgh, UK. A flyer used to advertise Šlaus's seminar is available below. A video of the seminar is also available through the Abdus Salam International Centre of Theoretical Physics.