Preparing for the next outbreak

TWAS is teaming with the Global Virus Network to explore new initiatives that could help the developing world address the threat of deadly viruses. 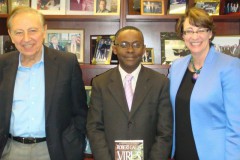 Recent outbreaks of avian influenza concentrated in China and coronavirus in the Middle East brought renewed warnings from international health agencies that humanity remains vulnerable to lethal viruses. Under a new partnership, TWAS and the high-powered Global Virus Network (GVN) will explore initiatives that could help the world respond to future threats.

In a letter of intent signed this month, leaders of the two organizations agreed to joint efforts that would increase opportunities for medical virologists from low-income nations to receive training at one of the centres of excellence located worldwide that are affiliated with GVN. In addition, the organizations agreed to "identify existing programmes under their respective purviews that would support training of medical virologists from low-income nations."

“Personal experience from my work in AIDS revealed an important lesson – that there is a need for a network to collaborate as viral threats emerge,” said Dr. Robert C. Gallo, co-founder and scientific director of GVN, most notably known for his co-discovery of HIV and the development of the HIV blood test. “Scientists in developing nations must be part of this Global Virus Network initiative, and TWAS is an important partner in this endeavor.”

"This is a vitally important partnership, and we believe that it can have a significant impact in a relatively short time," said TWAS Executive Director Romain Murenzi, who also serves on the GVN Board of Directors. "Researchers from the developing world who study and work at the GVN centres of excellence will return home better prepared to take leadership roles in detecting and monitoring viral outbreaks, providing diagnosis and treatment, and developing policy to support this global effort."

Murenzi and GVN President Sharon Hrynkow signed the letter of intent in the U.S. city of Baltimore, Maryland.

"We look forward to working with TWAS and its regional offices in implementing training programmes in the field of medical virology, so that we may build the world’s capacity to tackle viral threats,” said Hrynkow.

The agreement came in advance of the GVN Spring Meeting, which convenes 30 May - 1 June in Munich, Germany. The meeting will feature panel discussions regarding specific viral threats and will also cover GVN funding initiatives, scientific reports, training and fellowships and reviews of collaborative projects among GVN centres and partners.

The importance of the meeting, and of the TWAS-GVN partnership, are underscored by recent reports of two troubling virus outbreaks:

Gallo, in the years after his milestone discoveries about AIDS, became increasingly convinced that more focus was needed on the 40-plus classes of virus that infect humans. He co-founded the Institute of Human Virology at the University of Maryland School of Medicine in Baltimore in 1996. And in 2011, he joined with virologists Reinhard Kurth of Germany and William Hall of Ireland to establish the Global Virus Network.

Kathleen Kennedy Townsend, former lieutenant governor of Maryland, was appointed chair of the GVN board. Hrynkow, as president, pledged to expand the organization’s base of funders, supporters, and global scientific partnerships.

Murenzi, a former minister of science and technology in the government of Rwanda, was appointed to the GVN board in January, joining an international team of highly accomplished leaders from the research, business, and non-governmental sectors. He serves on the board's executive committee and the development committee.

Under the letter of intent, a key focus for partnership will be on bringing researchers from the developing world to one of GVN's more than two dozen centers of excellence in more than 20 developed and developing nations.

That will match well with current TWAS initiatives to recruit scientists from the developing world and help them to visit universities and centres of excellence outside of their home countries, where their stays may be for the few days of a conference or for the years needed to earn a PhD.

TWAS currently offers more than 300 PhD fellowships at universities in nine developing nations. Separately, the TWAS-UNESCO Associateship Scheme offers associates the chance to make two visits, each lasting two-three months, to a centre of excellence outside of their home countries.

Among developing nations, said Murenzi, many lack even basic facilities for diagnosis and treatment of viral diseases. But the joint efforts with GVN could begin to address that need, he said.

"What we're doing is plugging our experience and our networks into the GVN network, which includes extraordinary, high-calibre researchers and centres," Murenzi said. "This should allow the partnership to have a worldwide impact in teaching and training scientists from the developing world to address the challenges of virology. This is a marvellous opportunity."