Footprints in the 21st century

Assessments on ecological footprints are blurring the distinctions between developed and developing countries, says Mathis Wackernagel, president of the Global Footprint Network. 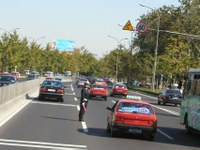 Budapest, Hungary. "When you look at the world from an ecological perspective, you will begin to realize that there are no 'developed' or 'developing' countries – just countries that live within their ecological means and countries that do not. Unfortunately, the vast majority of the world's people – some 80% – reside in countries that are living beyond their means. Such ecological deficits will be a defining factor in the 21st century."

That's the message that Mathis Wackernagel, president of the Global Footprint Network and co-creator of the ecological footprint concept, conveyed to the more than 800 participants at the World Science Forum, held in Budapest, Hungary, 4-6 November 2009. He later expanded on his views in an interview with the TWAS Editor.

In its simplest terms, an ecological footprint is an accounting system that measures resource flows. On one side of the ledger are supplies: How much bioproductive area exists to provide all the ecological services we use? On the other side of the ledger is human demand: How much bioproductive area is needed to provide all the things people demand?

Or more simply put: How much nature do we have? How much do we use?

"The key," he says, "is to not overshoot," that is, not to consume more resources than the planet can regenerate, or to produce more waste than ecological systems can absorb.

Wackernagel and his mentor William Rees, a regional planning professor at the University of British Columbia, coined the clever term 'footprint' in 1992, which they originally called 'appropriated carrying capacity'. The concept took off with the new term and today a growing number of countries, corporations, nongovernmental organizations and citizens across the globe have embraced it as a way of assessing the impact that their activities are having on resource use and, more generally, the environment. Ecological footprint, in fact, has become the preferred way of examining whether we are living within our ecological means.

In the 21st century, sustainable ecological assets are at the core of long-term wealth.

Instead of focusing on developed and developing countries, Wackernagel chooses to examine the specific attributes of each country. Is it, for example, densely or sparsely populated? Does it have adequate resources to meet the needs of its population? What is the state of its soils and forests? How much carbon is it emitting into the atmosphere? How wisely is it managing its resources and planning for the future?

Equally important, he and his research teams examine long-term trends. For example, China's ecological footprint has quadrupled over the past four decades. As a result, China as a whole is now 'demanding more from the planet' than any other country except for the United States.

One application of 'footprint accounting' is to determine whether a country runs an ecological 'credit' or 'deficit'.

The trends are not encouraging. As Wackernagel notes, in 1961 the world was consuming about 50% of the planet's ecological capacity. That meant it could still afford to grow within the prevailing economic development paradigms of the time that valued wealth creation above all other measures of well-being.

Today, in contrast, the world is using 30% more ecological capacity than it has at its disposal. "At some point," he says, "we will run out of natural stocks to liquidate, or waste sinks to fill." As recent discussions concerning the risks posed by climate change, food and energy insecurity, and biodiversity loss suggest, the tipping point may be closer than we think.

While the heaviest ecological footprints are being exerted by high-income countries or countries with rapidly emerging economies, this does not mean that low-income countries should disregard their resource issues. Africa, for example, is one of the two continents (South America is the other) where ecological capacities still exceed existing levels of resource use.

But even in Africa, Wackernagel warns, rapid population growth and poor resource management may mean that many countries overshoot their use of ecological resources before they are able to provide the majority of their citizens with an adequate standard of living. In other words, such trends will undermine Africa's ability to sustain its development.

In the 21st century, Wackernagel notes, sustainable ecological assets are not a marginal concern but at the core of long-term wealth. "These assets, when managed well, will provide an irreplaceable competitive advantage for rich and poor nations alike."

Just one more reason why, in Wackernagel's view, dividing the world between developed and developing countries has outlived its usefulness. New challenges and new paradigms for development, he says, demand new ways of understanding.