Building on a strong foundation

By extending its networks and using them for communication, TWAS can increase its global impact, says the Academy's Steering Committee. 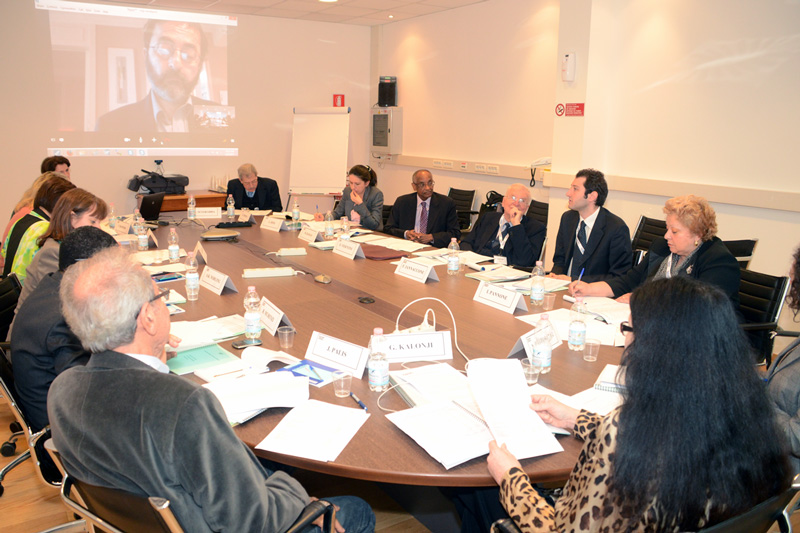 The TWAS Steering Committee has approved the 2014 budget and encouraged the Academy to build its networks and use them to promote TWAS's programmes globally.

In a meeting on 20 February, representatives of the Italian Ministry of Foreign Affairs and the United Nations Educational, Scientific and Cultural Organization (UNESCO) offered strong support for TWAS’s work and its initiatives for building science in the developing world.

The key to continued success, said members of the Steering Committee, is to make TWAS's work more well-known, both in Italy and globally. The Italian Government through its representatives in the Steering Committee reiterated Italy’s commitment in supporting TWAS – as well as IAP, the global network of science academies, and the InterAcademy Medical Panel (IAMP) – in building science in the developing world. In that regard, Italian embassies and consulates could provide important support for that work.

The TWAS Steering Committee is comprised of representatives of the Italian government’s Ministry of Foreign Affairs and UNESCO, with both organizations appointing knowledgeable external experts. It meets once a year to review the Academy’s strategic objectives and programmatic activities; assess financial accounts; and approve the budget for the current year. In addition, members evaluate TWAS's progress in advancing its goals and provide advice on how it can fulfill its mandate more effectively. The committee met for a half-day this year at TWAS headquarters in Trieste, Italy.

To open the meeting, TWAS Executive Director Romain Murenzi delivered a recap of the Academy's accomplishments in the past year, with a focus on finances and fundraising.

A fundraising committee has been established and a formal strategy developed, and Murenzi announced that the government of Brazil has just agreed to donate USD100,000 to the Academy. Steering committee members welcomed the news. Gretchen Kalonji, UNESCO's assistant director-general for natural sciences, urged Murenzi to pursue financial support in the private sector, as well.

Murenzi and members of the Steering Committee identified several others areas where TWAS could pursue its mission and extend its impact. Among them:

Brazilian Academy of Sciences President Jacob Palis, the immediate past president of TWAS who was one of UNESCO’s representatives at the meeting, expressed strong support for the survey. Women must be elected to science academies based on merit, he said – and by following that standard, the Brazilian Academy has raised its proportion of women members to 13.5%.

"That's still very small," Palis said, "but it's much more than most major academies in the world."

Significant financial support for OWSD and Gender InSITE comes from the Swedish International Development Cooperation Agency (Sida). "Let me thank Sida whole-heartedly for this strong demonstration of trust in the programmes," Kalonji said.

"We really appreciate the cooperation with TWAS and OWSD", said AnnaKarin Norling, a research advisor at Sida's Unit for Research Cooperation who attended the meeting.

Communication drew considerable attention at the meeting, with the Steering Committee and TWAS staff discussing several measures to extend the Academy's global presence and impact. For example, participants embraced a plan to develop TWAS's video skills and post more video of meetings and other materials online.

Other ideas focused on cooperating to share networks. Italian representatives asked TWAS to provide news of all significant events and initiatives organized by the Academy, so that the information could be disseminated to the ministry's global network.

They also detailed how working more closely with the Ministry's network of Italian scientific attachés could lead to dissemination of TWAS news and support for the Academy's overseas events, and possibly collaboration on some initiatives. All of that would aid TWAS, while reflecting Italy's significant, long-term investment in the Academy.

Murenzi expressed gratitude for the support from the Italian government, UNESCO, Sida and other partners. With that support, he said, TWAS’s small staff has been able to create and administer programmes for hundreds of PhD and post-doctoral researchers and other scientists.

The TWAS Steering Committee meeting was attended by: