The world's poorest countries and their allies should focus on Internet and communications technology to build momentum in science and engineering, TWAS Executive Director Romain Murenzi said at a conference in Beijing. 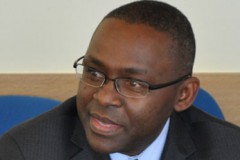 If you're a scientist in an LDC, but you lack computers and broadband, then "even if you can gather data, how do you analyse it?" Murenzi asked. "How do you store it? How do you share it with colleagues? The risk is that, while other countries advance, the LDCs only fall further behind." [Download the full text of Romain Murenzi's talk below.]

Science in the world's 49 Least Developed Countries is a crucial focus for TWAS. Scientists from some of those nations were in attendance at the 12th CAS-TWAS-WMO Workshop Forum, 'International workshop on operational oceanography for developing countries'.

The four-day forum is intended to strengthen collaboration among researchers from developing countries who work in operational oceanography by exploring by common scienti  fic and infrastructure issues. It is sponsored by the CAS-TWAS-WMO Forum and hosted by CAS's Institute of Atmospheric Physics (IAP)  and its International Center for Climate and Environment Sciences (ICCES).

Mitrasen Bhikajee, director of the UNESCO's Intergovernmental Oceanographic Commission (IOC), also is attending the Beijing forum. On Monday, Bhikajee spoke of IOC's capacity development and transfer of technology programme and how they could benefit developing countries. He also announced the upcoming second International Indian Ocean Expedition programme starting around 2015.

CAS, TWAS and WMO have worked together to provide PhD Fellowship programmes and other opportunities for young scientists in the developing world. "For TWAS, one of the central challenges is to find a way to help LDCs build a foundation in science, to build momentum and build confidence," Murenzi said. "We really be  lieve that in a poor country, one scientist with a master's degree can make a difference – even better, one PhD. That is the importance of our Fellowship programmes with CAS and WMO."

Murenzi noted that the Institute of Atmospheric Physics hosts the CAS-TWAS Centre of Excellence for Climate and Environment Sciences. It is one of five such centres in China organized by the two academies, and all make use of advanced computing technology for analysis and model-building. Without such tools, he suggested, the progress of science would be significantly slowed.

But while some developing countries have invested and advanced enough to obtain those tools, most LDCs have not. While those countries are home to nearly 900 million people, the science awakening that has swept nations such as China, India and Brazil has barely touched the LDCs. Of the 49 LDCs, 31 are in Africa.

Murenzi cited statistics from the International Telecommunications Union (ITU), which illustrate the disparity between developed nations and developing nations, including the LDCs.