Sunday Ekesi, a top researcher and interim director of research and partnership at icipe, a key-TWAS partner in Nairobi, Kenya, urges stronger containment measures to halt the spread of the fall armyworm, a devastating agricultural pest that's new to Africa.

It's a familiar problem in the Americas, where its presence has been reported since 1957. But to Africa it's a relatively new and dangerous pest that is currently devastating maize and rice fields in some seven countries of Sub-Saharan Africa.

The fall armyworm (Spodoptera frugiperda) is a moth that, in its larval stage, burrows into crops and kills the plants. The first alarming signs of Spodoptera presence in Africa were recorded in 2016, in early spring, in Sao Tome and Principe. The pest has since been confirmed in Nigeria, Ghana, Zambia, Zimbabwe, Malawi, Mozambique, South Africa and Namibia. Already it has destroyed thousands hectares of crops.

"The pest is so aggressive because, like any pests invading a new area, it has few or no natural enemies," explains Sunday Ekesi, a principal scientist and head of the plant health theme at the International Centre of Insect Physiology and Ecology (icipe).

At icipe, Ekesi oversees most research and development activities in the centre’s four themes including animal, environmental, human and plant health with capacity building and institutional development as a cross cutting unit. As an expert in entomological problems of horticultural and staple crops, Ekesi looks for soft solutions ­– such as biological control and monitoring systems – that can substitute for heavier chemical products. In eliminating unwanted pesticides usages, he says, it's also important to ensure that pest management interventions are properly timed to protect humans, biodiversity and the environment. He has more than 20 years of working experience with arthropod pests of horticulture and has coordinated several research projects on the same topic.

Any new invasion outstrips the local phytosanitary defence system because the authorities are not prepared to react quickly to those specific invaders. Besides, as Ekesi adds, Spodoptera is a relatively new pest to the environment with no natural enemies (that could prey on it) that have co-evolved with it in Africa.

The fall armyworm is native to the United States and Argentina. Scientists don't know exactly when the first invasion into Africa happened, but some observers think that it might have been around for a while because of a close similarity with another local species that makes its identification difficult.

During its maturation timeframe, as little as 10-12 days, the worm evolves into a moth and swarms out as a young adult. As such, it has the incredible ability to cover up to 1,000 kilometres in search of distant, new regions with fresh crops to consume.

In Zimbabwe, the government reports that some 130,000 hectares of land have been affected so far. That's why it has authorized the use of hard synthetic pesticides that are sprayed using airplanes contaminating the environment and serving as major risk to humans and biodiversity and also disrupting the ecological balance. There are reports that Tanzania also has been severely affected, losing about 20,000 hectares of maize and other crops in the country's north and southeast.

There are no confirmed reports of infestation in Kenya at the moment. But the government, through the Ministry of Agriculture, is on high alert. And the Kenyan government has officially asked icipe to be proactively involved in the preparation of stakeholders and in providing technical information when available.

"Icipe is the only research-for-development centre in the world exclusively focused on insects as they affect and benefit humans, animals and the environment," explains Segenet Kelemu, director general and chief executive officer of icipe and the winner of the 2011 TWAS Prize in Agricultural Sciences.

Icipe and TWAS are close partners in scientific research. In 2010, icipe joined the TWAS South-South Fellowships programme, agreeing to host some postgraduate, postdoctoral and visiting scientist each year. In addition, the centre has also joined the TWAS-UNESCO associate scheme, which allows researchers from developing countries to visit the institution twice in a three-year period.

Kelemu, an African scientist with global influence, was elected to TWAS in 2015. In 2015 she was the guest speaker at a TWAS round table organized in Trieste (Italy), where TWAS has its headquarters, during the international event Trieste Next. She is the 2014 L’Oréal-UNESCO for Women in Science Awards Laureate for Africa and the Arab States. She was also elected to the African Academy of Sciences in 2013, and formerly served as vice president for programmes at the Alliance for a Green Revolution in Africa (AGRA). 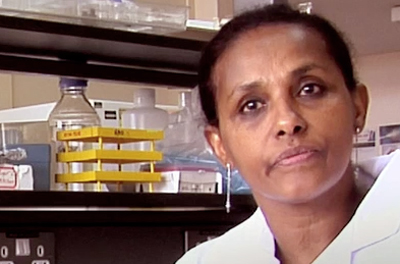 At icipe, Kelemu leads cutting-edge research to support beneficial insects, control those that cause problems, and identify insects that could be used as a source of protein for the world's population. And the fall armyworm threat has definitely established icipe's leadership in providing timely scientific assistance during environmental emergencies.

"With climate change impacts and movement of people and commodities, these types of epidemics can occur," Kelemu said in an interview. "Countries with  these sorts of outbreaks not only can face devastating crop losses, but they can encounter agricultural trade bans as these pests can be classified as quarantine pests. These types of outbreaks do not happen in complete isolation." Unfortunately, policy-makers and decision-makers can be slow to take action, and that allows problems to continue to increase in impact  before they intervene.

At first attack the fall armyworm's invasion often goes unnoticed, because the small larvae that hatch from egg burrow into plant parts hiding inside. It becomes visible only after close inspection and as the larvae grows, but by then it is too late to save the plant. It prefers to feed on maize, but also targets wheat, millet and rice, the main sources for food in southern and eastern Africa.

Spodoptera is also considered a quarantine pest because goods and merchandise from infected countries need to be properly inspected to make sure they do not carry the insect when they enter a pest-free nation.

"Quarantine inspectors should be vigilant and properly check that imported products do not host the pest," Ekesi says. "But in Africa, because of our poor phyto-sanitary management system and with little control over movement of products across borders, often there are only minimal inspection at points of entry to inspect products. This is why some of these insects can sneak into a country and cause devastating consequences."

"To prevent unwanted entry, the first step should be to secure the borders and check the movement of products that are known to host the insects," Ekesi explains. And to minimize the movement of products into a given area, governments should adopt the so-called community-based quarantine system, involving local authorities and creating a buffer zone equipped with effective monitoring tools.

Engagement of local policymakers and the public is critical, according to Ekesi. Communities must be informed that there is the need to limit excessive movement of products, because controlling the movement of agricultural goods is an effective way to prevent infestations.

But if a pest makes it way into a country, management measures can begin only after the whole area has been secured against further invasions. "Management measures whenever possible should start with softer options including mass trapping, use of less harmful synthetic pesticides and biopesticides," the scientist explains.

Chemical pesticides have been used massively over the past decades. Today their application is declining as a result of new legislation and the evolution of resistance in pest populations. Biopesticides are new agents based on living microorganisms or natural products, which are widely used in integrated pest management (IPM) and should be aggressively advocated by policy makers.

IPM is a strategy that combines different crop-protection practices with monitoring of pests and application of biological, cultural, mechanical and use of synthetic pesticides only when absolutely necessary. Common biopesticides developed by icipe and a Kenyan-based private sector company - Real IPM Ltd (www.realipm.com) for management of a variety of pest problems include a family of compounds known as Real Metarhizium®.

One of these substances has been applied on crops affected by armyworm with very promising results in Zambia. Another biopesticide that is less harmful to the environment is "spinosad", a mixture of compounds obtained from the bacterium Saccharopolyspora spinosa.

"Biopesticides are soft option because of their very low mammalian toxicity and residues that degrade rapidly in the field," Ekesi explains.

Icipe is taking center stage in the defense effort: policy-makers from Zambia, Malawi and Zimbabwe have asked icipe's experts to help in guiding and defining intervention strategies, sharing information and good practices with other nations that are not well-prepared. In early February, the government of Mozambique with the pest at its doors has asked icipe to provide technical information and advice.

In Kenya, the Ministry of Agriculture has recently organized a workshop where icipe played an important role in the discussion to begin to alert stakeholders of the risk beyond Kenya's borders and to help them to be prepared.

Icipe is not new in the fight against invasive pests. The Centre, through an initiative funded by the German Government, DFID/UKAID, and the European Union through its Integrated Biological Control Applied Research Program, has developed IPM packages targeted also against fruit flies, which cause losses up to USD2 billion per year in Africa.

"Our IPM packages are tailor-made to provide much needed impact on a particular insect pest," says the scientist. "Over the years we have been able to develop a lot of different products to solve plant-related  or human health, or animal health problems that are largely environment-friendly."

Icipe organizes so-called field days, gathering 300-500 farmers at any given time to explain their new technologies and teach growers on how to use them. They bring the technology right into the fields, and with the interactions with several farmer, extension personnels, NGOs and private sector partners.

With its rapid spread, management of the armyworm has become central to every training activity. Many different parties take this information from such field days, and from there some of them have also begin to mobilize resources on their own to disseminate appropriate technology to contain the pest problem.

"Farmers realize that they can make more money - or, at least, lose less money - if they follow our instructions," Ekesi observes.

"The key thing to do is, therefore, to invest on research and train a number of crop protection specialists – pathologists, virologists, entomologists and epidemiologists," Kelemu concludes. At the end of the day, achieving good science is important. But equally important is to get that science to the end-users and persuade them of its benefits.

Tags:
2017
fall armyworm
African pest
Sunday Ekesi
icipe
Kenya
Segenet Kelemu
Your subscription could not be saved. Please try again.
Your subscription has been successful. An e-mail with a link has been sent to confirm your subscription.
This website does not use profiling cookies, but only first and third party technical cookies, including cookies from social media plugins.
To learn more about our cookie policy or to change your cookie settings, click here.
By using this website and clicking “accept”, you consent to the use of cookies in accordance with our cookie policy.Accept