Getting a handle on air pollution

Jamaica has a problem. They know their local industries are releasing pollutants, such as heavy metal particles, into the air. But they have no way to monitor the pollution. With no effective monitoring strategy, they don’t know how much is being released into the air, or where it’s going once it’s airborne, or even how it’s worsening the health of Jamaicans.

The National Environment and Planning Agency (NEPA) in Kingston, Jamaica, has an office handling air pollution issues. But it is relatively new – just a few years old – with only two people working on Jamaica's air pollution issues. The International Centre for Environmental and Nuclear Sciences (ICENS) has all the necessary equipment for monitoring and analyzing air quality, but it was tied up for other environmental work. They also needed someone to help them begin monitoring their air quality. So Nnenesi Kgabi went to Jamaica to help.

Kgabi is an atmospheric scientist with Polytechnic of Namibia in Windhoek. She also has experience improving South Africa’s air pollution monitoring systems. She visited the island nation with the help of the TWAS-UNESCO Associateship Scheme, which allows researchers from developing countries to make two visits to a centre of excellence, like ICENS, in another developing country to pursue collaborative research.

The associateship is just one of many programmes in which TWAS works with scientific institutions to give researchers from the developing world the chance to pursue collaborative research in another country for up to a year. These visiting researchers get an opportunity to form international links while raising the profile of science in their home country. Both the host institutions and the Academy provide financial support. 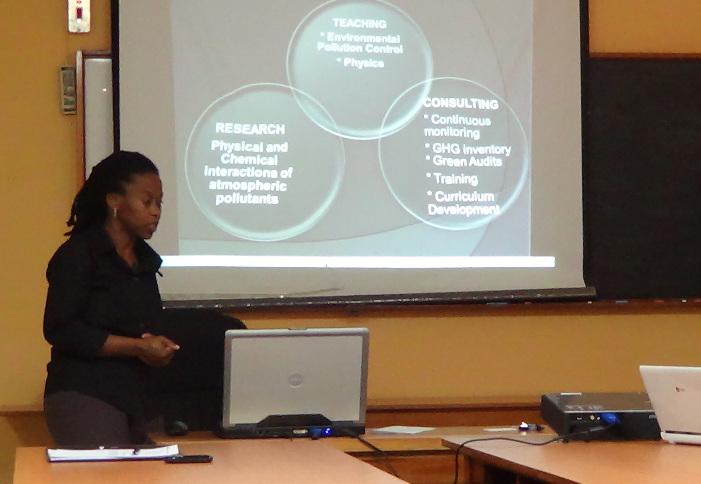 After Kgabi arrived in Jamaica, she found numerous problems that needed solving. Developing countries trying to get a handle on air pollution monitoring often begin by borrowing approaches from other countries, Kgabi said. This can be a problem, because each country deals with a unique environment that presents different problems. “You need to have your own standards,” she said. “You need to be able to revise your own standards based on scientific studies. You need to have people who are able to assess whether people are complying to those standards.”

Furthermore, most monitoring stations that exist in Jamaica are owned by the industry, not the government. So NEPA, as a government agency, needs their own monitoring system to compare against what the industry reports. They also need to closely monitor the companies for compliance with regulations.

It’s also still not clear what the major pollutants are in Jamaica. While some are obvious, such as carbon monoxide from cars, much air pollution also probably comes from the mining industry, and the pollutants released into the atmosphere depend on the industrial activity. But even then, Jamaica needs to understand the local air dynamics well enough to understand whether those pollutants linger in the air in dangerous concentrations or harmlessly disperse.

Kingston, Jamaica’s capital, could even be what Kgabi called a “cooking point” – a place where toxic particles easily get trapped in and around the city because of the sea, high humidity levels and the surrounding hills.

As for health problems, those haven’t been gauged well either, Kgabi said. Only two studies have looked into health issues related to air pollution, neither providing conclusive information. “Most of those studies, they are sparse,” she said. “There are no continuous studies that can help us point to the real issue.’”

Jamaicans also frequently burn their household trash, which could worsen the air pollution and present further health issues. “Sometimes people start fires, even in the dumping site,” Kgabi said. “So there’s a lot of pollution now that comes from the burning, and people are trying to figure out how to monitor those pollutants.”

Through the associateship, Kgabi was able to use her expertise to help the Jamaican government determine its next steps. She helped conduct a review of air quality studies done from 1972 to 2012, and advised Jamaican regulators to set up two mobile monitoring stations of their own, rather than just accept what data comes from the industry. She also suggested computer software that would help them determine how pollutants move and become diluted, thus helping determine where pollutants go once emitted and how they affect human health and the environment.

Once all this knowledge is gathered and analyzed, Jamaica can determine the greatest and most dangerous sources of pollution and prioritize them. “Then they can focus on the main activities that are causing the pollution, and they then can work together with the communities to reduce it,” Kgabi said.