Last week, TWAS executive director, Romain Murenzi, presented the programmes and activities of TWAS to permanent delegates and observers at the UNESCO headquarters in Paris. 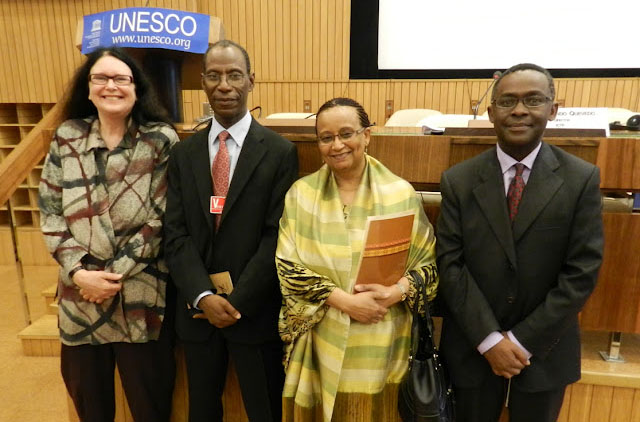 TWAS and the Abdus Salam International Centre for Theoretical Physics (ICTP) share a long and inter-related history: not only do both institutions share an attractive site overlooking the Adriatic Sea at Trieste, Italy, but both were founded by the Nobel Prize-winning physicist Abdus Salam. Both institutions also share the goal of building science capacity in the developing world, with many activities and programmes focused on Africa; and both operate under the administrative structure and support of UNESCO.

For these reasons, on 24 May, TWAS executive director Romain Murenzi and ICTP director Fernando Quevedo were invited to present the programmes and activities of their respective institutions (especially those promoting science in Africa) to permanent delegates and observers from UNESCO’s Member States at the organization’s headquarters in Paris, France. The meeting was arranged to coincide with UNESCO's Africa Week, and was attended by many African delegates.

During the subsequent discussion, Ambassador Serra of Italy highlighted the need for ICTP and TWAS to work with other institutions in Trieste and also with UNESCO, especially on fundraising and outreach.

Alongside the TWAS and ICTP presentations, was a presentation given by Professor Amadou Hama Maiga, Deputy Director General of the African non-profit organization, the International Institute for Water and Environment Engineering, 'Foundation 2iE' www.2ie-edu.org, which is based in Ouagadougou, Burkina Faso. The foundation provides affordable training for engineers by building partnerships with different public and private organizations.

Murenzi considered that" the meeting was particularly useful, as we were able to reach out to the ambassadors to UNESCO of various African nations and inform them of our programmes and our goals. Hopefully they will now pass on this information to their colleagues at home and we will receive more applications to our various programmes from under-represented African countries.'