Science and science diplomacy have a key role in promoting prosperity and peace, and Trieste is a natural center for such efforts, says Mario Giro, undersecretary of the Italian Ministry of Foreign Affairs.

The international scientific resources concentrated in Trieste make it a natural center for international science cooperation and science diplomacy, says Mario Giro, undersecretary of the Italian Ministry of Foreign Affairs (Ministero degli Affari Esteri, or MAE). Giro's comments came in an interview as more than 50 scientists and diplomats from 32 nations gathered in Trieste for the first ever course in science diplomacy, organized by the American Association for the Advancement of Science (AAAS) and TWAS.

Participants in the week-long course are meeting under the guidance of experienced experts in science diplomacy to examine cases where approaches based on scientific diplomacy may produce positive results. Giro, with a vast experience in international mediation, shared with TWAS's staff writer Cristina Serra his comments on the initiative and on the so-called Trieste System where TWAS operates. 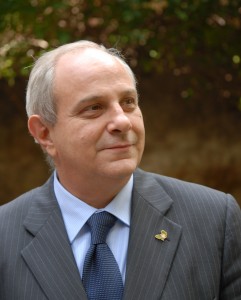 TWAS and AAAS have launched the first course on Science Diplomacy. How do you see this initiative in light of the long-standing relationship that TWAS and the Italian Ministry of Foreign Affairs have built?

The so-called Trieste System (also called Trieste Hub) that Abdus Salam helped build and that is financially supported by the Italian MAE proves that science can promote cohesion among populations. The Trieste System and TWAS itself have had a role in shaping many new generations of young scientists, and this gives Italy and our language (Italian) an international weight, weaving links that involve diplomacy as well.

Where is it that science and diplomacy mediation may prove itself useful, in a rapidly changing world?

Science and diplomacy can perform best when it comes to food safety and provisioning. This is why the 2015 Milan Expo is an incredible opportunity we should catch. I think, in particular, of international crises that have water as the major trigger. In these sectors science can help through innovation, where resources are scanty or there are reasons that fuel controversies.

The Trieste System serves as a trademark for Italy, since Nobel Prize winners, illustrious scientists and researchers do live or have lived in Trieste. Is Italy aware that such a treasure sits on its territory? Is it aware of the tremendous impact it can have at the international level?

I'm afraid that a full perception of this influence is still missing. This is indeed one of my major goals: I'm working hard to promote the Trieste System and to bring its potential to light, both at the national and international level. Trieste and Italy must learn that this city has been hub to many scientists from developing countries as well as from emerging nations. This fertile environment has nurtured a whole international community that now speaks Italian, knows and loves Italy. This prompts me to ever promote the Trieste System and to come visit the city whenever I have a chance.

How do you personally engage in promoting the Trieste hub?

I mention the Trieste System whenever possible. The recent Africa Day held in Rome, on 27 May at the Italian MAE, has highlighted TWAS's role throughout the world. Minister Federica Mogherini has also praised TWAS's activity, and the Trieste System as a whole has spurred interesting considerations on the role of Italy abroad. I do hope that during the celebrations for the 50th anniversary of the International Centre for Theoretical Physics, next October, the scientific community in Trieste is going to convene scientists from Italy, Europe and Africa as well, to establish a fruitful dialogue that serves as a strategic key for 2015, to create new plans and novel cooperation programmes that are focused on Italy and Africa, but able to spread Europe-wide.

What is the role that Trieste and its scientific community can play, in partnership with Italy, on the international stage?

This city that Italy should be proud of because of the scientific goals it has achieved can have a role in issues of international relevance such as the global food agenda, which will be addressed next year at Expo 2015 (the world's fair in Milan). Italy as well could use Trieste as an example to follow in Italy and abroad. I do believe that many of the problems that impact on the world, today, could be solved using science.

TWAS's mission is to sustain the south of the world, where many nations still suffer from civil wars and political instability. Do you think that science could be a tool to help these nations restore peace?

Science has a precise role. However, the international scientific community is a global network and that, in principle, could help some nations swerve from hardships and gain better living conditions. Years ago, during the Cold War, the collaboration established among Russian and American scientists has helped pave the way to achieve more friendly relationships at the political level. Even more important is that science play a unifying role among peoples, by allowing the sharing of knowledge and, in general, of culture.

The Italian MAE has always supported the Trieste System. Does the ministry that you represent intend to keep supporting this community, in view of its valuable work and scientific production?

The Italian Government will keep supporting the Trieste System because it represents an engine that fuels scientific cooperation in the frame of sustainable development. We need help this community to establish ever-deeper roots at national and international level. Everybody must realize that this is a common heritage we have to be proud of, for its role in addressing and solving urgent problems that the world is facing. Seeds for a better future are budding here, in Trieste, where racial, sex or religious discriminations do not root. The past European financial plan has endorsed a community programme focused on scientific and technological cooperation between Europe and Africa. We all hope that the new European Commission will put science at the forefront of the international agenda, especially the relationships between Europe and Africa, in particular during the semester when Italy will preside over the work of the Council of the EU. Europe needs to revive its passion and enthusiasm: this is possible if we build our foundations on scientific culture and cooperation with Africa, pursuing a model based on sharing and on promoting cohesion among peoples.

Tags:
Mario Giro
Africa Day
2014
Italian Ministry of Foreign Affairs
Your subscription could not be saved. Please try again.
Your subscription has been successful. An e-mail with a link has been sent to confirm your subscription.
This website does not use profiling cookies, but only first and third party technical cookies, including cookies from social media plugins.
To learn more about our cookie policy or to change your cookie settings, click here.
By using this website and clicking “accept”, you consent to the use of cookies in accordance with our cookie policy.Accept