Since 1970, the Gulf nation has been using its natural resources to promote research and develop new technologies that will, in turn, improve the lives of its people.

The presence of vast oil reserves beneath the deserts of Oman has given the nation extraordinary wealth. But oil has also brought a series of challenges and difficult decisions: If Omanis lacked education and basic health care, then oil wealth, by itself, was not enough. And if oil supplies were limited and production was dropping? Then something had to change.

Over a span of decades, Oman has turned these difficult tests into transformation. Today, it is evolving from a conventional oil state into a stage for innovation. Its health system is among the world’s best. Its education system is growing robustly – and many of the science and engineering students are women. Investments in science are creating a new future for Oman in which oil remains important, but research across diverse fields creates new opportunities.

Salma Al-Kindy, a chemist and Oman’s first female TWAS Fellow, is at the vanguard of Oman’s emerging science culture, with her research focused on health and environmental protection.

“The interesting thing about science in Oman is the ... willingness to channel the scientific research output in different directions,” Al-Kindy said in a recent interview. “Multidisciplinary, science-based activities such as nanotechnology and materials science, especially those used in green energy and in the construction and oil industries, are getting started.”

At the 25th TWAS General Meeting in Muscat, Al-Kindy and the large contingent of Omani scientists, policymakers and students made clear that the nation is committed to taking a strong role in the Gulf region and in the international science community. 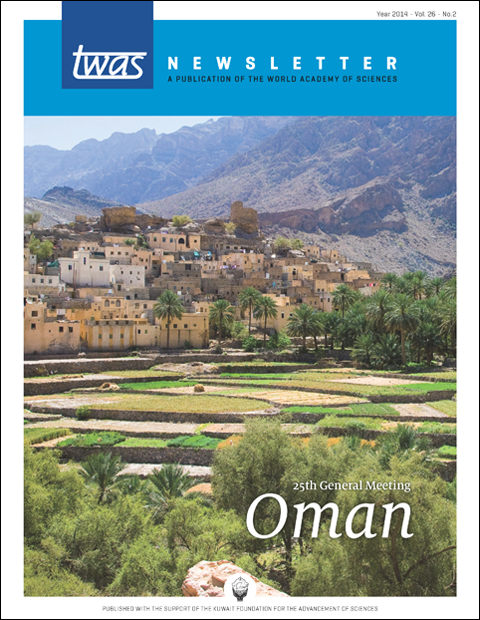 The meeting was held from 26 to 29 October 2014 outside the nation’s capital in Muscat, hosted and co-organized by three leading Omani science and education institutions: the Ministry of Higher Education, The Research Council and Sultan Qaboos University. The meeting attracted more than 500 scientists, educators and policymakers – many of them Omani – on the opening day. Its agenda explored major scientific achievements ranging from life-saving HIV-prevention strategies to advances that are shaping global policies important to ocean health.

Those who came to the meeting found a nation where science and technology have generated remarkable momentum in recent decades. Sultan Qaboos University, the nation’s premier university, is among the top institutions of higher education in the region. Computers with Internet connections are available to more Omanis than ever, as the nation’s development boom has touched even the most remote parts of the country.

And it all began, naturally, with oil.

A source of economic energy

Oil production is inseparable from Oman’s progress thus far. According to the US Energy Information Administration, Oman’s crude oil production continually surged until 2000. But then, it began to sink as accessible reserves ran low.

This was an alarming threat to Oman’s development efforts, and it provoked a strong move toward innovation. Oman has since emerged as a global leader in using enhanced oil recovery techniques, which inject water, chemicals or gases into an oil well to change the composition of the oil, making it easier to extract. One such method Oman has adopted is using steam, said Saif Abdullah Al Hiddabi, assistant secretary general of Research & Scientific Programmes for the The Research Council of Oman.

“We have the laboratory, which is the big fields in Oman,” said Al Hiddabi. “So we feel ourselves as unique in that sense and we have some strength, because there is already a significant amount of money being invested by the oil companies in this area.”

These new methods allowed Oman’s oil production to resume its upward trend, beginning in 2007. And in Hiddabi’s view, those improvements in oil technology have a direct bearing on Omani lives: an infrastructure boom, a strong health system and the spread of information technology.

A humble past, an impressive present

All of Oman’s progress in the last 45 years has been through the work of Sultan Qaboos’s government, said Omani Research Council Secretary-General Hilal bin Ali Al Hinai during the ministerial session on the first day of the General Meeting. Under Qaboos’s leadership, Oman established a policy of aggressively competing to present opportunities for young scientists in Oman.

“The first five-year plan started in 1976, and in 1996 started the first long-term development plan, Vision 2020,” Al Hinai said. “And in that there is significant progress on the development of human resources and through education.”

These plans have already transformed Oman dramatically, said Al Hinai. For example, Oman went from having only three elementary schools and 10 kilometres of asphalted roads in 1970 to over 1,500 schools and more than 31,000 kilometres of paved roads today.

Healthcare is also of paramount importance to Oman’s current government. In 1970 the Sultanate had two missionary hospitals. Now it has 65 large hospitals and more than 1,000 clinics that provide free health care to all of its citizens. [Learn more about the dramatic advances in Oman’s healthcare.]

Today, Oman’s Vision 2020 plan is the roadmap for its economic future. It details the nation’s plans to achieve economic stability, a diversified economy, a stronger private sector and other goals by 2020. Oman commissioned a study on renewable energy sources in 2008, highlighting wind and solar power as the best options. The country aims to produce 10% of its total electricity from renewable energy sources by 2020.

Meanwhile, Oman has excelled at modern communication technology. It boasts the second highest wireless-broadband subscription penetration in the region, behind only Qatar, according to a 2013 report by the International Telecommunication Union. The Omani government has done much to bring the information age to rural populations through a 2002 digital strategy called “e-Oman”. In 2013, 80.1% of Omani households had Internet access.

As its people become more accustomed to modern-day conveniences, Oman will need more energy. And to grow its energy sources, it will need scientists, engineers and other skilled professionals to bring innovative ideas to fruition.

An investment in Omani brains

In Al Hiddabi’s view, that raises the next great challenge for Oman: building a corps of local researchers so that scientific progress can sustain itself. To achieve this goal, Oman is investing heavily in education and making a strong commitment to bringing women into science and engineering.

Historically, Oman has drawn expertise from other countries to train local scientists who can then take up the mantle as generations pass. He said hosting the TWAS General Meeting in Oman reflected another way the country is trying to shape its own scientific future.

“This conference is really to promote the research and innovation awareness among researchers, and create incentives and mobilize along that direction,” he said. “But certainly the critical mass – the capacity building issue – is we don’t have enough researchers. This probably will take time.”

Drawing on outside resources is just part of the challenge. The Sultan’s government poured about 13% of its 2013 budget, or 4.6% of its gross domestic product (GDP), into education. About 0.5% of GDP has been spent specifically on research and development.

Additionally, all private higher education institutions in Oman have to work with leading international universities that help with projects like curriculum development, Oman Minister of Higher Education Rawya Al-Busaidi said in a 2013 interview with the Oxford Business Group.

Al-Busaidi was a crucial supporter of TWAS’s meeting in Oman. In 2004, she was the first Omani woman appointed to a government ministerial position, and she has had a key role in the nation’s commitment to science and technology. In 2014, Forbes magazine named her the second most powerful Arab woman in government for her improvements to Omani education.

Oman has also taken great strides in including women in the new age of high-level education. Before 1970, practically no women attended schools in Oman, but Qaboos changed that with his universal education policy. By 2004, about 48.4% of students in all public schools were female, as were 56% of the teaching staff, a UNESCO report found. Today, about half of the students at Sultan Qaboos University are women, many of them budding scientists.

Much of the scientific achievement on display at the General Meeting focused on work done by women, or important to their lives. Indeed, women’s achievements have become part of the Omani culture, and since 2009 the country has celebrated Women’s Day every 17 October.

But Al-Busaidi says there is still work to be done. The country needs more competitive faculty pay. “Historically, Oman has offered lower salaries and fewer benefits, relying on more attractive lifestyle factors,” she said in the interview. “Recruiting quality faculty necessitates superior research facilities and a critical mass of other high-standard faculty.”

A future of sustainable energy

Just as energy has defined Oman’s character and created its wealth, energy creates important challenges for the future.

Demand for power has grown so rapidly that the country has suffered from severe power outages, according to a report from Norton Rose Fulbright, a global legal practice that specializes in advising industries on sectors such as energy.

“Currently one-third of Oman’s current energy needs are met by oil, and as its oil reserves are predicted to have a remaining lifespan of only 40 years,” says the report, “the government is faced with the question of what will replace this source of energy when it runs out.”

But Oman has shown keen awareness of these challenges. According to Norton Rose, with the right policy, solar and wind power have great potential in the nation. This energy-consciousness has also led to Oman’s emergence as a centre of environmental science. Oman’s Ministry for Environment and Climate Affairs is the only such government ministry in the Arab region.

Oman’s fast-growing education system appears ready for the task. Al Hinai said there’s a growing focus within the system on environmentally friendly technology. He cited work being done on developing carbon-capture technology – methods for trapping carbon dioxide emissions before they’re released into the atmosphere – a competition for students to design and build environmentally friendly houses.