Revealing the secrets of Asian monsoons

Monsoons nourish Asian agriculture, and they can spawn destructive storms. At a workshop sponsored by Chinese Academy of Sciences and TWAS, young scientists from developing nations are getting a close look at the latest research

BEIJING – From the south of India to the northern reach of East Asia, the annual cycle of monsoon storms have for millennia shaped Asia's culture and economy. In good years, the monsoons water farm fields and replenish water systems. In bad years, there are crippling storms that wipe out crops, destroy villages and wreak economic havoc. And in the absence of monsoons, there can be deep droughts.

At a workshop here this week sponsored by the Chinese Academy of Sciences (CAS) and TWAS, young scientists from 10 nations are getting insights from research into monsoon dynamics and their impacts. And they are hearing of promising new ways to forecast monsoons that may aid farmers and disaster readiness efforts throughout much of the Asian continent.

"If flooding occurs, or drought occurs, it's very serious and very dangerous," said Bueh Cholaw, deputy director of the CAS-TWAS Center of Excellence for Climate and Environment Sciences (ICCES). "It can destroy up to 10% of the annual gross domestic product of an entire country. That's why so many young people in developing countries are interested in monsoon science."

The eight-day "ICCES International Training Workshop on Asian Monsoon Variability and Predictability" opened Monday in Beijing, and continues through Monday 15 July. More than 40 young scientists and advanced science students from the monsoon region are receiving lectures and presentations from scientists from China and the United States. A number of the participants will present their own research at the workshop. They also will visit China Meteorological Administration (CMA), laboratories operated by ICCES and the CAS Institute of Atmospheric Physics (IAP), which hosts the centre, and the University of Chinese Academy of Sciences.

CAS is China's largest and most comprehensive R&D organisation. It has 104 research institutes across the full range of scientific disciplines, located across the nation. It also has three universities, plus libraries, technology support centres and news and publishing units. In all, it employs 63,000 scientists, engineers and technical workers.

ICCES is one of five CAS-TWAS Centers of Excellence that received new CAS investments last year, after CAS President Bai Chunli was elected president of TWAS. Each of the centres provides training and education to scientists from the developing world – from workshops to PhD research opportunities – with a focus on key challenges and areas of practical need. Originally founded in 1991, ICCES focuses on the key scientific problems in global climate and environment, especially the prediction of climatic and environmental disasters within developing countries. It is devoted to establishing the cooperative and innovation research center of CAS and TWAS in the area of climate and environment sciences. In addition, ICCES also holds the secretariat of CAS-TWAS-WMO Forum(CTWF) on Climate Science, and has organized more than 10 international symposiums since 2000. 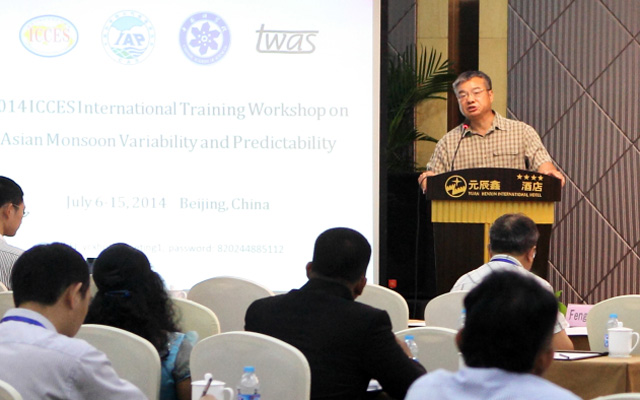 At the workshop's opening ceremony, leaders from CAS, IAP and TWAS urged participants to take full advantage of the science presented at the workshop – along with other opportunities offered by CAS and TWAS for scientists and engineers in the developing world.

"With training like this, we can address common challenges more effectively,"  said Cao Jinghua, deputy director general of the CAS Bureau of International Cooperation. "Lots of you will play very important roles in future cooperation between our scientists and the scientific communities in your countries. CAS emphasizes cooperation with developing countries, and we believe that by working together here, we'll be able to sow the seeds of friendship for future cooperation."

"At events like this, you can strengthen your scientific knowledge and build your career," Edward Lempinen, the TWAS public information officer, told the participants. "But you have a responsibility to share this knowledge. When you go home, you share it at your universities and institutes, with your colleagues and your students. That way, they become stronger. And in the process, you make your countries stronger, too."

In basic terms, a monsoon is a large-scale change in the prevailing wind that shifts with the season – usually late spring and late autumn. Typically, the monsoon brings changes in rainfall and temperature.  Central to monsoon dynamics are the contrasts between land and ocean, said Zhu. In winter, there is a contrast between the warm ocean and the cold land, so the wind comes from north. In the summer, it's the reverse. The summer monsoon is often associated with heavy rains and, sometimes, destructive storms.

But from year to year, there can be tremendous variability in the monsoon – its reach, its patterns of rainfall or drought, and its intensity. And the monsoon itself may be changing. That presents a central challenge for the region's policymakers and its people – and for scientists.

For example, Zhu cited air pollution. Atmospheric aerosols can block sun from warming the land, and that can affect monsoon dynamics. The cyclical pattern of El Niño's ocean warming and the cooling effect of its counterpart, La Niña, have a complex interaction with monsoon patterns. The warming global temperatures associated with climate change also shift the contrasting temperatures between land and ocean, Zhu said.

"This is why people in developing countries and Asian countries are more and more concerned about climate change."

It's a fact of ordinary life that the weather is unpredictable. But in a detailed presentation on Monday afternoon, researcher Xue Feng offered a close look at new insights into factors that shape the East Asian summer monsoon.

For example, research by Xue and colleagues has demonstrated that abrupt shifts in high-altitude wind patterns – particularly in the upper troposphere and stratosphere – may indicate the contrast in land-ocean temperatures that drive monsoons. These abrupt seasonal shifts seem to precede onset of the monsoon season by a few days.

Xue also described his research into fundamental global dynamics that give rise to the monsoon and its variability. In Xue's research, the summer monsoon's source is located – counter-intuitively – deep in the Southern Hemisphere. The interplay of low-pressure atmospheric conditions in Antarctica sends air flowing north to engage with high-pressure systems over Australia and along the eastern coast of Africa. That circulates air across to South and Southeast Asia, where it takes shape as a monsoon.

But there are factors that can temper or amplify the pattern. Heavy snow in the Tibetan plateau can reduce the contrast in land-ocean temperatures, Xue told the workshop audience.

He and his colleagues studied six periods of the El Niño Southern Oscillation that have occurred since 1980 – two of them strong, four of them moderate. El Niño is characterized by a band of warm ocean water temperatures off the Pacific coast of South America, and it can last for a few years.

But in the "decay year" of El Niño, Xue said, "the western Pacific subtropical high pressure dome is located more southward, resulting in more rainfall along the Yangtze River Basin in Central China and less rainfall in north and south China."

If the El Niño has been weak, however, factors such as atmospheric circulation in the high latitudes of Eurasia can offset that pattern. Then rainfall has been heavier in northern China.

The factors described by Xue offer a new way of understanding monsoons and their variability – and suggest hope for better prediction in years ahead.

"In next 10 years," Zhu said, "we can probably have some big progress in monsoon predictability. We may be able to predict earlier – probably in three months time, we can make a pretty good prediction of what will be characteristics of the monsoon in the next year."

"Very helpful to the efforts in our country"

For the young scientists attending the course, the scientific insights that came on the first day of the workshop seemed to offer immediate practical benefits for their own work.

Sunil Kumar Pariyar earned his two master's degrees at Wageningen University and Research Centre, the Netherlands and Tribhuvan University, Nepal respectively, studying monsoon and its related extreme rainfall events for several years in his home country of Nepal. After learning of the Beijing workshop, he contacted ICCES Director Lin Zhaohui and submitted a proposal seeking further collaboration; Lin invited him to stay at ICCES for several months of additional research after the workshop is done.

Nepal's weather clearly is changing, Pariyar said in an interview, but the patterns and causes are complex.

"If you have a warmer climate, you would expect weaker monsoon circulation...so the amount of rainfall would decrease," Pariyar explained. "On the other hand, because of changing climatic conditions, the weather system over the Indian Ocean and Arabian Sea actually get more intensive, so there is more and more formation of tropical cyclones. These kinds of cyclones have an impact on rainfall over Nepal."

The result: The number of extreme rainfall events is increasing; the overall amount of rain is decreasing, and so is the number of days without rain. That suggests possible changing climatic conditions on a global to regional scale.

At ICCES, he'll do work on extreme rainfall and hot and cold days in Nepal; in the second phase, he'll look at the factors responsible for these extreme weather events.

D.M. Hasanthie Sandarekha Dissanayake works at the Industrial Technology Institute in Sri Lanka. Climate change is a priority area in Sri Lankan government science policy, and her institute is going to open a climate research unit.

Dissanayake noted the presence of experienced and expert scientists at the workshop. "They are very helpful, and we can have collaborations with them," she said. "This is a good chance to build relationships – that will be very helpful to the efforts in our country."

Lakemariam Yohannes Worku works for Ethiopia's national meteorological agency, and he attended ICCES's 2013 workshop on extreme weather prediction for developing countries. He has stayed in touch with colleagues at the centre.

"In Ethiopia, we have very frequent droughts – sometimes there is a flood, but more often the huge problem is drought," Lakemariam said. "Ethiopia is famous for its earlier famine and drought crisis.

"These are connected to the global circulation system, like El Niño and the Asian monsoon systems. By understanding the Asian monsoon and getting the knowledge of how to predict the monsoon's onset and offset, it should be possible to give a better prediction to the farming community in Ethiopia."