"Just 24% of the members of the Mexican Academy of Sciences are women," says Rosaura Ruiz, the academy's president. 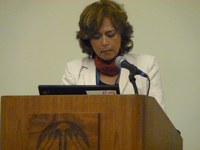 Ruiz made her remarks at the 2010 American Association for the Advancement of Science (AAAS) meeting in San Diego at a session organized by TWAS focusing on "science academies in society."

Another major challenge facing academies is the age of their membership. According to a recent survey conducted by the InterAcademy Panel (IAP), the average age of academy members worldwide is more than 65.

The Mexican Academy of Sciences has pursued a different tack in addressing issues of gender inequality. As Ruiz notes, it has focused on developing programmes designed to promote and empower women within the existing framework of the academy. For example, it has led efforts to allow women scientists in Mexico apply for grants and fellowships at a slightly older age than their male counterparts that is intended to reduce the penalty for taking time for maternity leave or caring for elderly parents. And it has lobbied to include women in high-level committees responsible for the awarding of grants and fellowships.